GoSpeed Racer On Her Published Novels 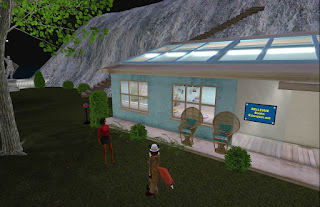 Many longtime residents know GoSpeed Racer (GoSpeed Rasere) as a DJ for many of Bay City's events and the owner of the KONA Internat radio station, as well as for being "Cleverly Named" after a character in cartoons. But she's also a published writer. She has written three novels inspired by Second Life, under her real life name R. Jacques. The third was just recently published on Amazon. I recently went to interview her about them.

We met up at her place near KONA Stream Studios. "Welcome," she greeted, "It's three levels, an underground, the surface, and my private studio up in the sky." I noticed a statue on the grounds which looked like the one on her cover in the third book, and made a note to bring it up later. We walked inside and sat down. 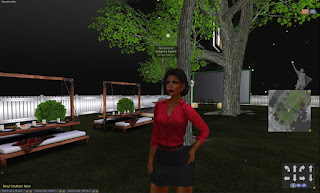 "So to begin with," I asked, "what gave you the idea for the stories?" "Several things," GoSpeed answered, "I've always been a science fiction fan. In Second Life I've been exposed to so many other people's imagination. Especially potent was their roleplay experiences. Many roleplay groups have forums packed full of storylines generated in SL." When I asked which ones were her favorites, she responded, "Oh, I never participated. I don't have the time or motivation to get so deeply involved. Bedsides, being 'GoSpeed' is enough for me to begin with (smile). Like many of us, my SL avatar is a character of our own making which only partially represents our true selves."

I then asked when did she start writing her first book. As it turned out, she had earlier projects before her published works, "I did start a short story back in 2009, but I never finished. Fast-forward to 2015 and my favorite podcaster/author did a two-part podcast about writing novels. It was then I decided to take the plunge and begin writing. I wrote a 20,000 word short space opera novel. It's pretty rough, I must admit. But I plan to revise and release it one day. 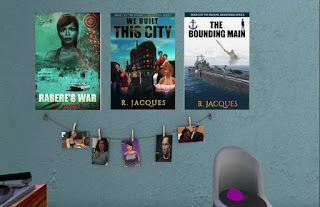 Her attention turned to her first published novel, Raser's War, "My first released novel I began in 2016. It was an origin story of sorts about GoSpeed and how she and her fellow NPCs in a futuristic virtual world gained their independence, but in the process, lose their innocence. Some 500 years in the future, mankind is at peace. That also implies life can be a bit boring of course, so many people seek entertainment and fulfillment in virtual space. GoSpeed is a virtaul resident of one world, Simvie Loko. Her kind, the NPCs, serve human users. As you may know, Utopias are never perfect. And humans plan a rebellion against authority, a world-ruling artificial intelligence named Gaiana. Gaiana hates dissent, so he sends forces into Simvie Loko to root out the rebels. The rebels fight back, and GoSpeed is recruited to fight with the rebels."

On the cover of her second book, We Built This City, Bay City is prominently featured on the cover. "It is a continuation of GoSpeed's journey," she called it, "The new world she lives in has less meaning. Her life on the island is not what she wants, so she goes to Bay City to find a new life. The story is much darker as GoSpeed loses her way and gets involved in activities she'd never dream of doing in her past life: PTSD, Loss of a relationship, losing her place in society. 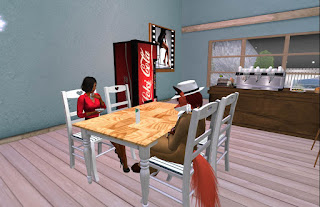 "We Built This City is the most Second Life relatable of the three stories. I included (with their permission) many residents of Bay City, (such as) Marianne McCann, Uccello Poultry, Pygar Bu, Thomas Hooker." I asked what the residents thought of their cameos. Racer answered, "Oh, they loved them! Oh, there is one caveat I used when writing about SL avatars. The basic premise behind 21st Century avatars in a 25th century simulation was that they were modeled after social media found in Internet archives. You may recall news stories about how it is possible to recreat personalities based on social media postings? Say you have hundreds or thousands of pictures, blog posts, etc... You could come up with a personality. Using that as a premise, the characters I wrote tended to deviate to a degree compared to how they act now." Some had comparable roles, such as Marianne's counterpart being the city's mayor and that of blogger Uccello being a TV journalist.

This time, the main antagonist is a criminal organization. "There is a neighboring city that was sourced from a late 1940s noire themed game (like L.A. Noire) run by the mafia," GoSpeed explained, "Angel City, a pseudo Los Angeles, actually." There's also more than just the mafia separating the two communities, "As you can imagine, there would be a clash of cultures and values between a mid 20th century people and a mid 21st century group." Among the characters are a couple whom had been cryogenicaly frozen in the 21st Century whose minds are uploaded into the virtual world to inhabit avatars. 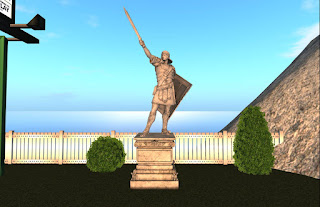 Recently published this month was her third book, The Bounding Main. "The third novel wraps up a few storylines and opens up the world of Simvie Loko to new lands," GoSpeed explained, "The first novel was about a loss of innocence. The second was the fall from grace. The thrid ias about forgiveness and starting anew. To get into the meat of the story, a new civilization is detected in a region of Simvie Loko that was off-limits. GoSpeed joins a joint expedition between Angel City and the ordinary citizens. They venture south to contact these new countries, and of course, things wind up being more complicated than they imagined."

I brought to her attention the statue on the cover, which was like the one in her yard. "Yes, a Roman centurion," she told me, then smiled, "which is relevant to the storyline. There are 'Romans' in the story." But these weren't exactly what we usually think of, "NPCs (aka Citizens) are from the 25th century. 49ers, residents of Angel City, are 20th century relics. The new countries they discover are from different parts of history, and alternate history to be precise. Remember the Star Trek episode with the planet that had 20th century Romans? Kinda like that."

I then asked if she was planning another book in the series. "This particualr series is finished," GoSpeed answered, "but there are other contemporary stories in Simvie Loko I can write about. I plan to write an anthology of short stories about various characters and locales in the world, like, the founding of Bay City, the first days of Angel City's arrival and the chaos that followed. You can only put so much in a novel. I want to give a few characters their due. It's also a form of world building too." 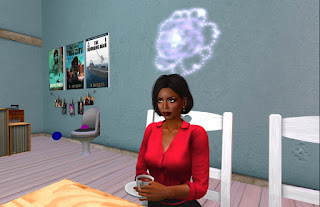 "After my anthology I plan to write about some of the characters leaving the virtual world and inhabiting android bodies. Two of them, Abba and Ravishal were sent to Mars to finish the job Abba started decades before. Her origin is alluded to in the first novel." So some of the virtual characters do end up in the real world, "Space is very harsh to human bodies. So, why not send androids with human personalities? ... To quote Elton John, Mars is cold as hell. Plus the radiation is pretty harsh too."

GoSpeed hoped that her novels would inspire others in Second Life to start writing, "There is a VAST amount of creativity here and so many stories that can be told. If I can self publish, then anyone so inclined can." She mentioned Book Island, saying aspiring writers could head there and share excerpts, "You can read them aloud or have the hostess, Selina Greene read them in voice chat. I shared scenes here and there as I wrote them. It is nice and informative to hear your writing read."

GoSpeed's novels can be purchased through Amazon on her page there (link) and Smashwords (link). On Saturday March 30, there will be a discussion about The Bounding Main at Book Island at Noon SL time.