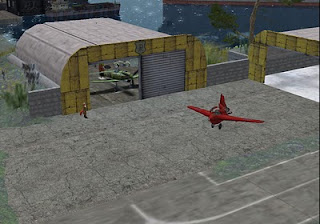 Vickster Kuhn is the Commander of the Luftwaffe group in the World War 2 RP area . Besides leading JG 2, the “Richthofens,” she has titles in several other groups, and her profile states she’s considered an ace in five flight groups on the Grid. Recently, she agreed to an interview with Second Life Newspaper.

Vickster Kuhn: Have a seat. This is one of the hangars I keep in Second Life. This one is dedicated to the Richthofen Squadron.

Bixyl Shuftan: Thank you. So Vickster, when did you first come across flying in Second Life?

Vickster Kuhn: Well I (first) flew helicopters, because I couldn't handle planes. But I had a good friend. She was into WW2. She had these great planes, and I wanted to do it too. So I started hanging around Wilders. I joined the RCAF and started flying regularly. Tthat was more than two years ago.

Bixyl Shuftan: When did you first hear of the RP at New Bastogne?

Bixyl Shuftan: Oops, excuse me. How did the World War Two Roleplay get started? 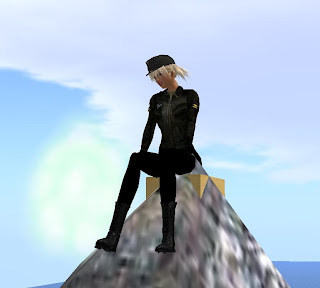 Vickster Kuhn: Well it started a long time ago, at least a long time ago in Second Life (laugh). It all really started in a sim called Sanctuary. It’s gone now. But they made this sim for Vice combat, WW2. Mostly flying. That is where most of the WW2 sims we have now were inspired. It was sort of the first inception of the Bastogne project, where we tried to integrate Vice combat and RP.

Vice combat was unique in SL because you can mix personal combat and vehicular combat with different weapons and everything. Before Vice no systems did that. Now there are several, but that's another story (laughter). VICE will ever be part of the history of SL combat, especially for aviation. But the best part is the mixture of ground and air elements.

Vickster Kuhn: Sure, and personal weapons, tanks, ships, everything.

Bixyl Shuftan: when did the Bastogne project begin?

Vickster Kuhn: About Bastogne (smile), After Sanctuary closed, as sims do, they made a partnership with the Flying Tigers, that’s the SL group, and opened two sims, Legends of WW2 and Fallout. Later they opened a third sim, called Bastogne. All three for WW2 Vice combat and RP. Saffron Giano owned Fallout and Bastogne and G of the Flying Tigers owned Legends. That was what I like to call the golden age of WWII RP in Second Life.

Bixyl Shuftan: Sounds like there was quite a bit of activity.

Vickster Kuhn: There was so much activity i still have a hard time processing it all in my own mind. I really came of age as an aviator in those days, and leaned how to organize. I was the Axis coordinator of Bastogne. And I successfully repelled the D-Day invasion of Normandy, which is one of my proudest moments in SL.

Bixyl Shuftan: Sounds like you made a number of kills that day.

Vickster Kuhn: Actually, I was in charge of the air defense, but I planned the defense of the beach to the letter, with the leaders of the ground forces, and it was planning that won the day. But it's ancient history now.

Bixyl Shuftan: What are some more recent accomplishments?

Vickster Kuhn: I’ve been very lucky in Second Life. My area of interest is combat aviation with an emphasis on WWII, and I have had a pretty successful career. I'm lucky to enjoy a good reputation as a flyer. And I ave extended this with my squadron JG 2 'Richthofen.' But my fame really comes from my career as a Flying Tiger. I’m not saying I’m famous, but a lot of people do seem to know me.

Bixyl Shuftan: Any future plans for the RP?

Vickster Kuhn: We are experimenting with a new combat system. For my sim we want to add more RP opportunities for civilians and medical people, and support people, and make more engaging contests. RP is the part that is the most wide open, because you can roleplay anything.

In real-life, I'm an office girl. In Second Life, I'm one of the most feared pilots (around). (laughter) You can see why I'm an SL junky. Bastogne is my gift to my friends. I missed old Bastogne so much. We had air and ground. And when it closed it was so terrible, that is why I did New Bastogne. It’s not like the old sime. My helpers and I redid it completely. We keep changing things. You have to in Second Life.

And we have had many hard times. Not just in Bastogne but in Second Life. People like us who make sims, it’s hard, because it takes a lot of people. Anybody can open a sim. But people like G, they are my inspiration. Not just land, but people and groups. We don't get many chances like this to play in Second Life. And they are fewer than they were in the old days. It's hard to coordinate and the least thing can ruin it.

Bixyl Shuftan: I heard something about membership in the RP climbing back to over 400.

Vickster Kuhn: We have a strong base group that's nearly two years old. That was the base group of old Bastogne.

Bixyl Shuftan: Anything else that you'd like to mention?

Vickster Kuhn: I would like to say that I have two loves in Second Life: the Flying Tigers and The Richtofen Squadron. And that I plan to have Bastogne for a very long time. And that I thank all my fellow WW2 RPers for all the great times and memories. (smile)

And with that, the interview was over. Before leaving, she did tell me of a Youtube she had done for the group. Having seen it, it makes for a fitting close.

The 9-11 ceremonies at the New York City Block, the NYC sim, had a number of pictures taken of them. Here are several of them to help better show the events of the day. 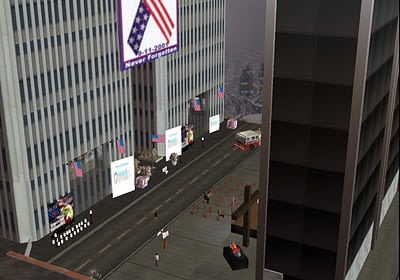 A view of the permanent Twin Towers Memorial and the seating from above before the event. 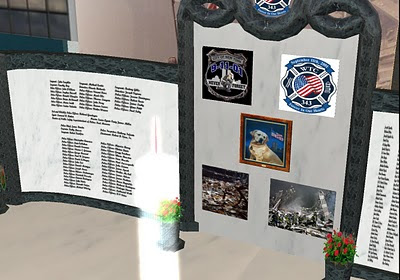 A closer look at the memorial to the fallen policemen. 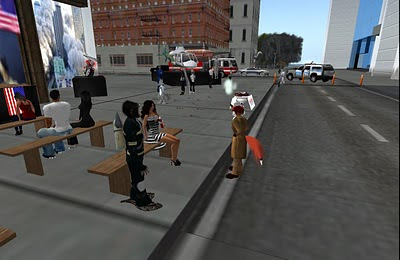 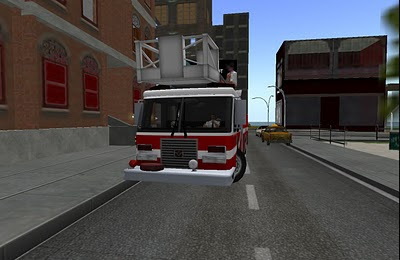 Taking the hook and ladder out for a test drive before the parade. 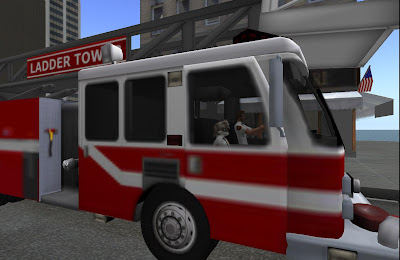 Another view of the hook and ladder. 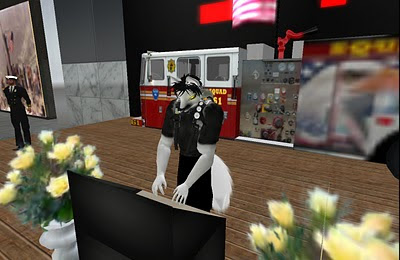 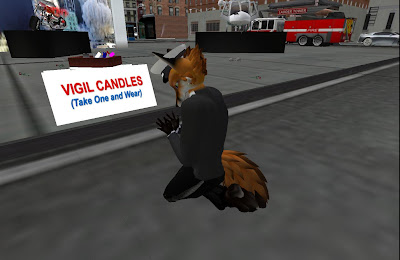 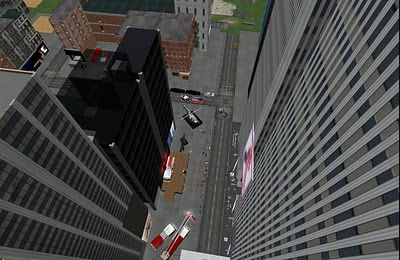 A bird's eye view of the commemoration. 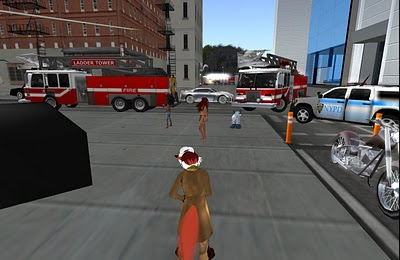 The parade of fire trucks passes the corner. 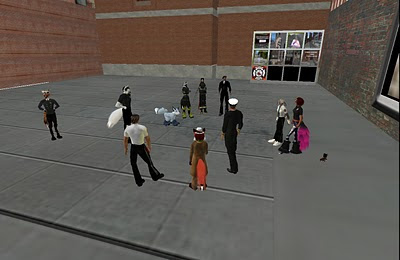 Several firefighters gather after the parade to share stories. 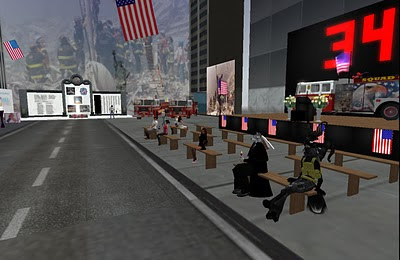 Following the end of the commemoration, people continued to come over and pay their respects.
Bixyl Shuftan
Posted by Bixyl Shuftan at 12:18 AM No comments:

What Not to Say to the Chronicaly Ill 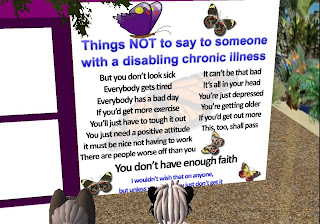 I remember reading somewhere more than twenty percent of Second Life Residents have some kind of disability. Some keep quiet about it. Others mention it to friends after a while. And some are open about it to friends and strangers alike.

One such friend, a Christian and mother of two, had the misfortune to be stricken with fibromyalgia, a painful disorder that is thought to affect between two and four percent of people. She has encountered a number of people in Second Life, many sympathetic and offering well-wishes and prayers. But a few seemed insensitive, or were clueless in what to say.

So on her public garden, she posted a list of “Things NOT to say to someone with a disabling chronic illness.” She tells me she had heard them at least once.

“Everybody has a bad day.”

“If you’d get more exercise”

“You’ll just have to tough it out.”

“You just need a positive attitude.”

“It must be nice not having to work.”

“There are people worse off than you.”

“If you’d get out more often.”

And what she thought hurt the worst, “You don’t have enough faith.”

“I wouldn’t wish that on anyone, but unless you get it, you just don’t get it.”

She tells me she had heard each of them at least once. So eventually, she felt the need to make the poster and put it up as a reminder that for the chronically ill, words truly can hurt.

“Have a Blessed Day”