By DrFran Babcock
For months I have been sending out notecards to individuals on various lists of Beta and early users, without any responses. This scattershot technique has not resulted in a single hit. Luckily, I happen to be in Second Life™ enough for serendipity to take effect. I was dancing at the Second Life Universe 10th anniversary party, when I started looking at profiles, and following the chat. I asked innocently (hehe) who the oldest person was at the party, and Caliandris Pendragon said she was one of the oldest, so I passed her my notecard with the oldbie questions on it. I was staggered when I received back her answers while I was still at the party. Cali is no stranger to the press, and just recently figured in a story about Second Life™ that was on The Verge (http://www.theverge.com/2013/9/24/4698382/second-lifes-strange-second-life ), detailing the persistence of the SL community, despite the belief that it had disappeared. In this article I learned that Caliandris had been Misty Mole! In addition, what really comes across is her undying love for and admiration of this virtual world. 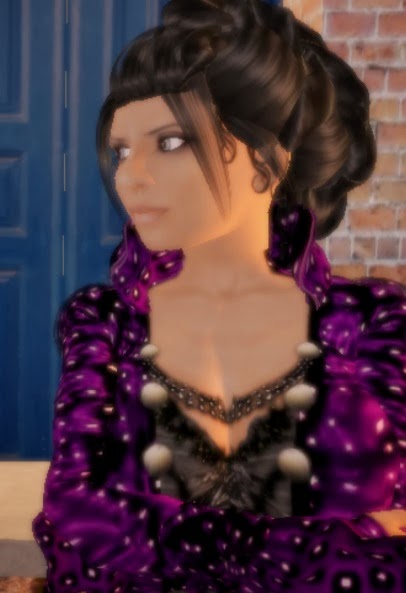 Caliandris has a blog (http://caliinsecondlife.blogspot.com), and I loved what she said on one of her earliest posts: "In the end, you have to tell the truth, I think, for people to respect your integrity and to take notice of what you say. So that's what I plan to do." Lovely. I won’t spend any time writing about Cali’s First Life, because you can read the article in The Verge. The purpose of The Oldbie Project is to share the lived experience of being an avatar in a new world. So, here are Caliandris Pendragon’s answers to the usual questions:

SL Newser: How did you find out about Second Life™?
Caliandris Pendragon: I’d been in the closed Beta and then the open Beta for Uru (an MMO).  When it closed one of my friends told me about There and SL..

SL Newser:   What are your earliest memories of Second Life™?
Caliandris Pendragon: I remember being confused by the leader boards, and they fooled me into thinking this was a game— having been used to challenges and games in Uru, I took the suggestion that I find Ben's Auto as an instruction.  I spent my lindens on a motorbike I didn't want because I wanted to win.
I found it necessary to explore from the hub in Ahern and easily got disorientated.  I worried about being lost and unable to find my way.  People hanging out in Ahern in those days were more benign and helpful.
There were only about 100 sims when I joined, and about 1,000 accounts, although I kept bumping into the same group of 20 or 30 people over and over at events.  The Lindens announced all events just before they happened when I first arrived, then at the top of the hour and gradually they abandoned that.
I saw quite a lot of the Lindens.  Partly that was because I was making an entry for the game development contest, but also because they used to run training and mentor events.  I became a mentor fairly early in my SL career and feeling that I was helping people kept me coming. 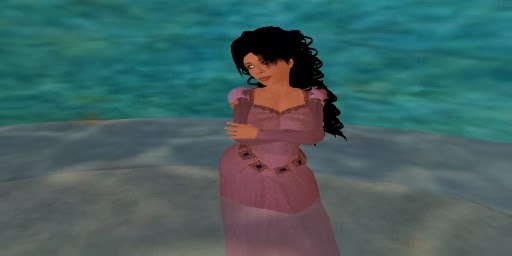 SL Newser:  What kept you logging back in during the early days?
Caliandris Pendragon: Initially I had been seeking to replicate the community I found in Uru Live, and even for a way to remake the places I had known there.  I quickly recognized how much more was possible in SL, and I wanted to make my own stuff and build. I could see the enormous potential for creation and it absorbed me with the limitless opportunities to make things.

SL Newser: What are your fondest memories of the early days?
Caliandris Pendragon: I entered the Game Development contest within a week of joining SL, and won a place in the contest, having first checked I could use as many helpers as I could find.  The team that developed on that project was much more than the sum of its parts and they achieved amazing things.

SL Newser: What are your funniest memories of the early days? 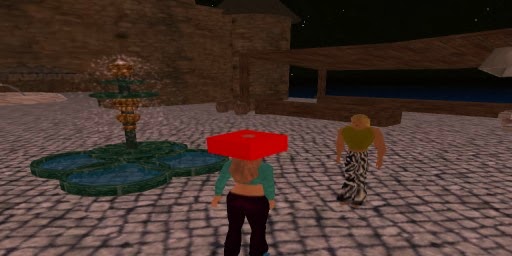 Caliandris Pendragon:  Oh, really hard to choose!  I bought myself a vagina and then found that the box was stuck tight to my head when I'd TPd to the most interesting party (and most of my friends hadn't got into the sim).  I made the box transparent as I couldn't take it off, but I spent the party sure that the Lindens at the party were seeing what the box on my head was!
Some friends and I made a party for Ratt Foo, the scripter who did most of the work on our game.  I made a giant rat, and then my friend put remote control scripts into them.  He spent ages making numbered tabards for everyone and writing out instructions and made a race track with a bridge for the players to stand on. He tried REALLY HARD to get everyone to get set up, but we weren't very adept at the remote control thing—rats went shooting off everywhere.  Then one of them realised you could sit on the rat and not lose it that way, and it was chaos... rats with people going in all directions.
I tried really hard to do what we were supposed to, but in getting on to the bridge I knocked a group of people off again.  I’ve never laughed so much in my life—it hurt!

SL Newser: Did you fall in love in Second Life™?
Caliandris Pendragon: Yes.  We are still together and have spent a lot of time in real life too. 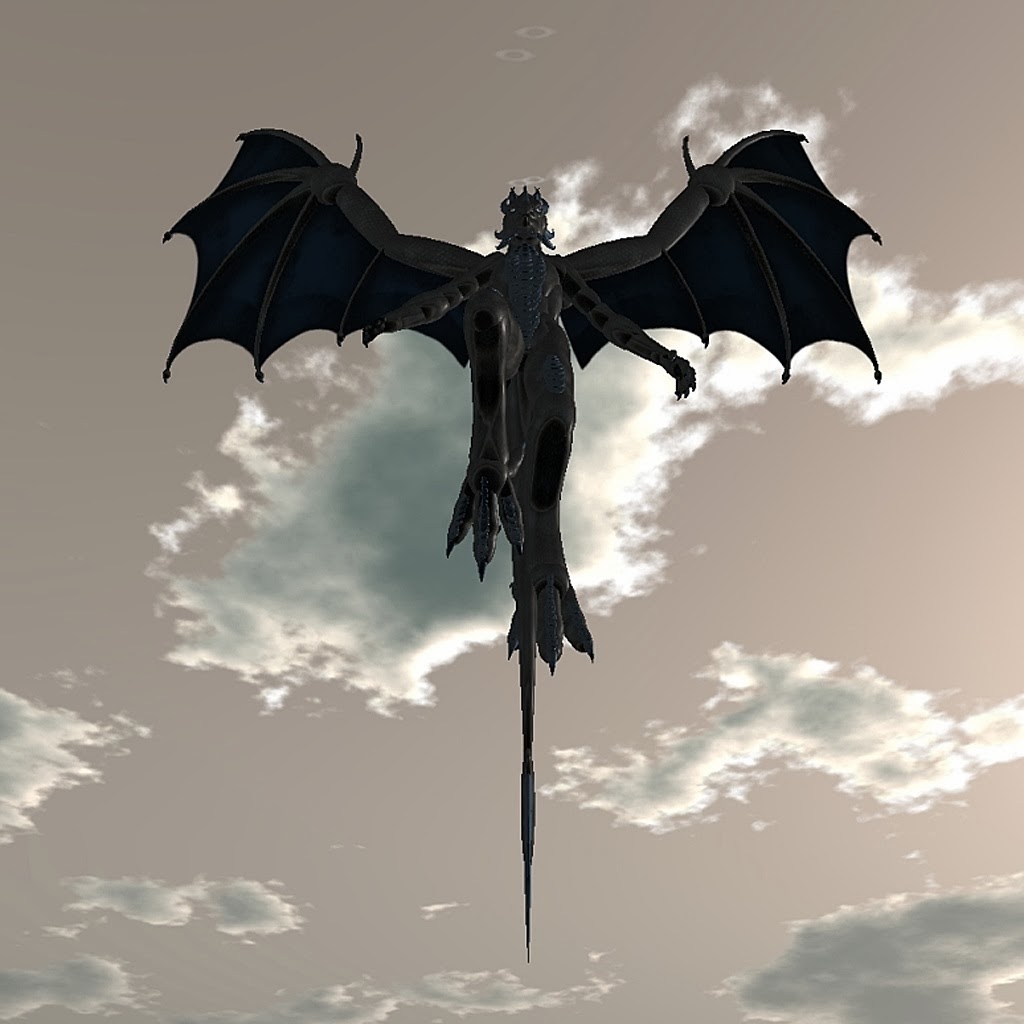 SL Newser: Who was your favorite Linden?
Caliandris Pendragon: Ekim. (ED NOTE: Ekim was one of the managers of the Moles and the Department of Public Works, thus Cali’s boss when she was a mole from 2008-2013.)

SL Newser: What would you like the world to know about Second Life™?
Caliandris Pendragon: It has the amazing ability to make you feel you are in the same space at the same time with people who are in very different places in Real Life.

Nautilis, some Linden Homes, Pyrii Peaks, Cape Ekim, parts of Linden Realms, The Sea of Fables, and those fabulous SL10B fireworks I have—all are the work of Cali as Misty Mole. Sometimes she did the builds, sometimes the music, but always a valuable contribution to the feel of Second Life™. If you have not seen or visited these builds, please make an effort to do so. While you are looking, try to imagine what SL was like before flexis, sculpts, and mesh. That was the original world of Caliandris Pendragon, and she has grown with it.
Image Credit: last two pictures by Marianne McCann
DrFran Babcock
Posted by Bixyl Shuftan at 6:00 AM 3 comments: 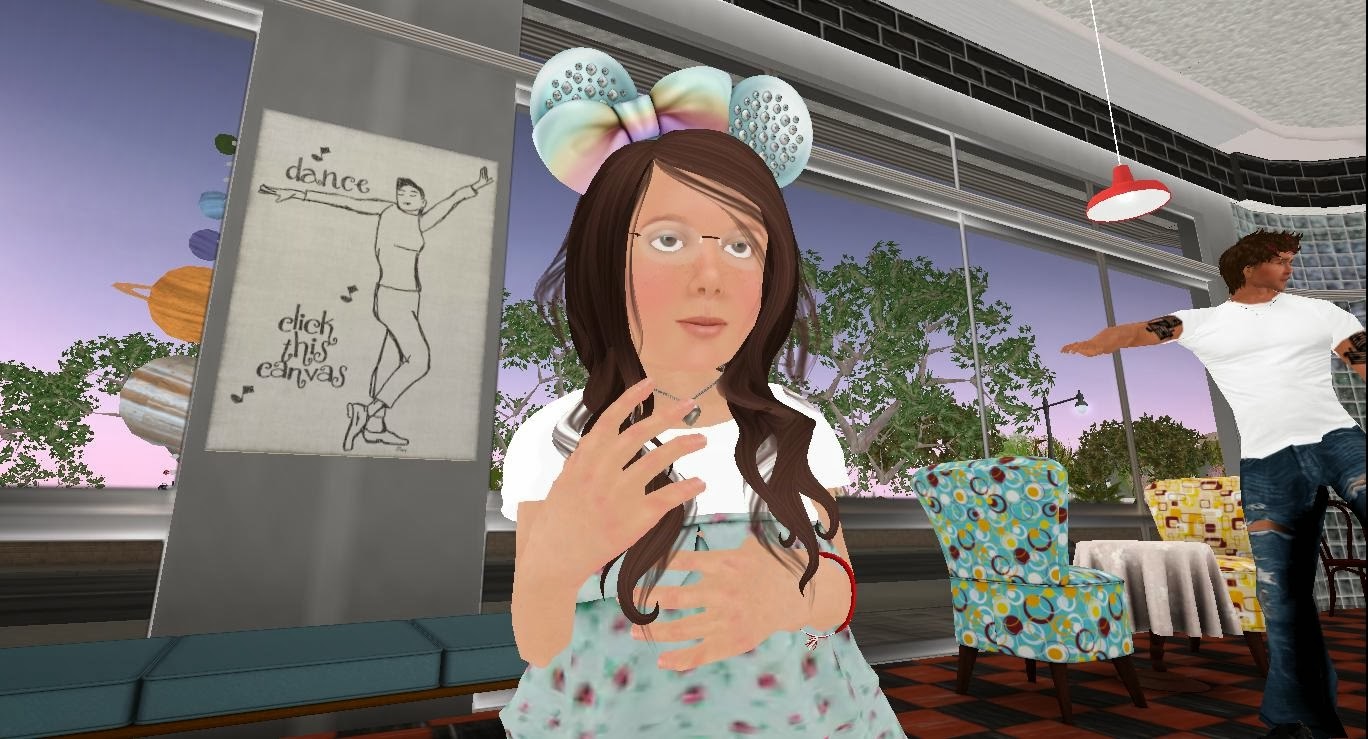 Saturday February 22 was a special day in Second Life because it was the rezz day of a special person: Marianne Mccann who was "born" in 2006. Here is a SL kid who has accomplished a lot in Second Life during her life. She has always been true to her SL inner child, but has been involved in so many things.  Marianne first entered Second Life as an adult, but became a three year old child soon after, Now she is an 8 year old, but is resting at that age. 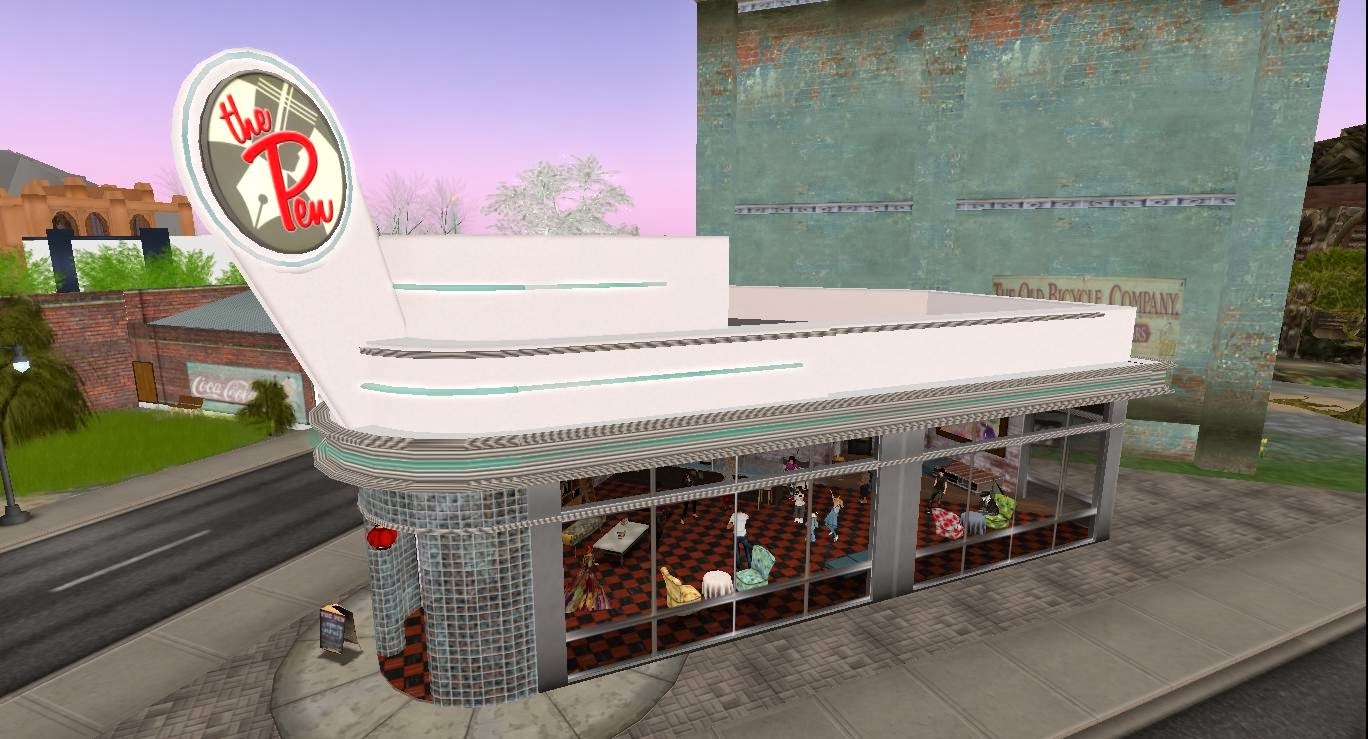 I went over to "The Pen" in Bay City, where she has properties, for her birthday party. Lots of kids and grown up friends were present for the festivities. Marianne herself did the DJing for the dances. People dropped by to congratulate her. I have known Mari since 2009. I believe I met here at my first visit to SLB at the kids build. Later I asked her to write an article for the SL Newser as part of a whole group of SL kids articles. You can read about Mari here  http://slnewserpeople.blogspot.com/2010/08/so-why-am-i-kid-avatar.html . I think she was SL kids age 3 then. 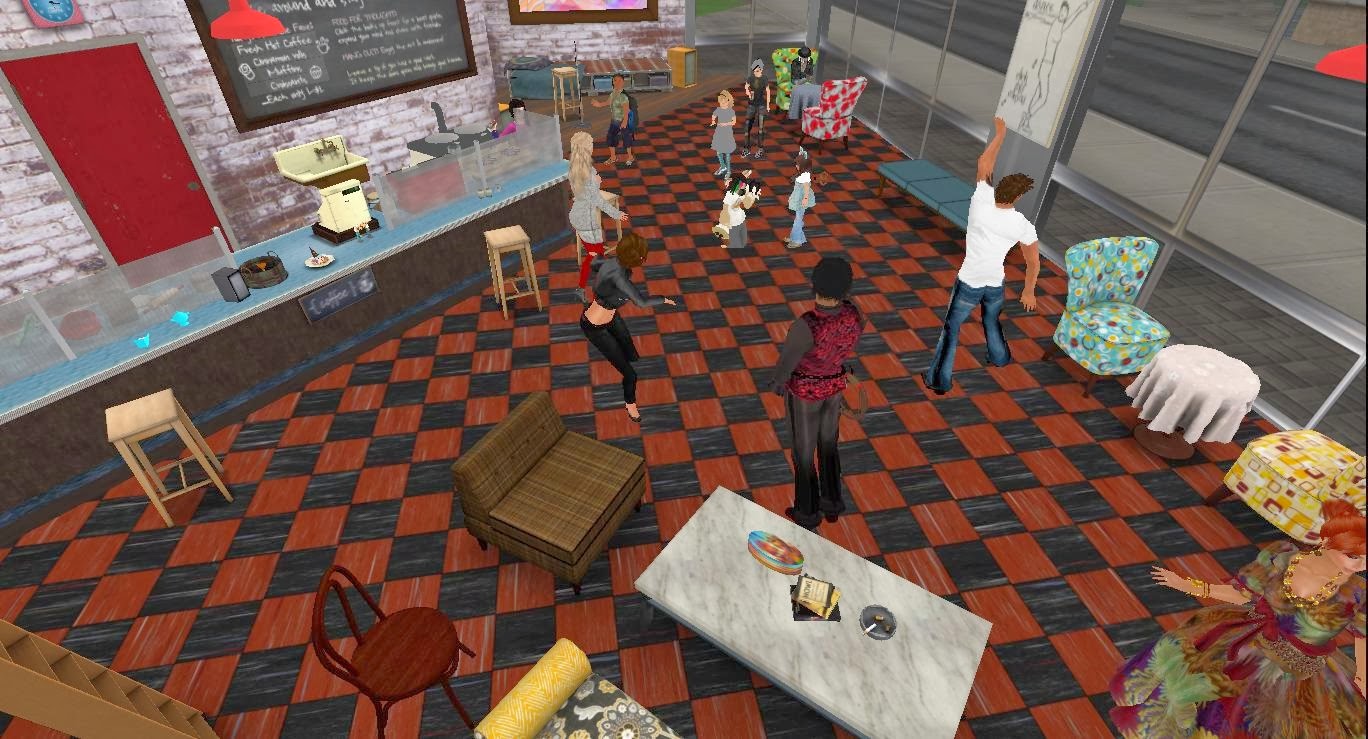 I have been at many events where Mari was involved in one way or another.  One of the most exquisite things I think she ever did was the history build for the SL10B . It was a complete look at the past years in a wonderful setting. I kept going back to it over and over so I did not miss anything. It should be preserved somewhere in Second Life for posterity.  Right now Mari is getting ready for the first Second Life Winter Games which will be held at Chamonix City in mid-March. I have always admired Mari and wish her so many more years of achievement in SL.
Drfran Babcock did an interview with her after the SL10B .
http://slnewserpeople.blogspot.com/2013/06/sl10b-interview-marianne-mccann.html
Gemma Cleanslate
Posted by Bixyl Shuftan at 6:00 AM 1 comment: