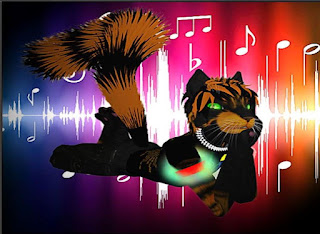 I finally got together with Scratch Musikatt, an amazing DJ on Second Life.  My first question was about how long Scratch had been DJ-ing. He answered, "DJing is the reason I got into SL in the first place. So, I've been doing it since 2004."

I asked him if he would say that he is a successful DJ.  "I suppose I could be considered successful," replied Scratch. "I mean, I've never been a superstar, but I did have a bit of a following for a while."And, I AM still doing it."

I was curious to know what kind of music Scratch usually plays at his events.  He giggled, "Hehehe, that's where things get interesting... I earned the nickname 'The Original Chaos DJ' a long time ago because I don't really pay much attention to Musical Genres. I'm known for playing anything, anytime, anywhere." 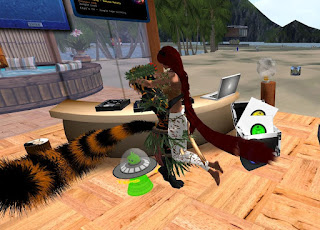 Muertos had been Scratch's lovely hostess for over a decade now.  They met when Scratch played for DJ Rory's Blue Parrot Beach Club and they have been best friends ever since.

My next question would be if Scratch is planning on playing for a long time. "I'll keep playing for as long as there are people to enjoy my shows," replied Scratch,  "I got into DJing in Second Life because I loved DJing in real life. Entertaining is one of my favorite things to do."

Scratch plays at the Happy Vixen Beach Club on Friday nights at 20:00 and at the Furry Fashion Lounge on alternate Saturdays at 20:00.  He also plays for a furry convention, and host a Karaoke event on the second night of the con, and is the DJ for the Deaddog party at the end of the con. 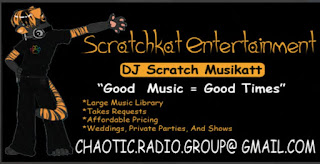 Scratch's goals for 2022 is to have a good time, entertain as many people as he can, and he wants to start DJing in VR Chat.

Scratch is an outstanding DJ with a bright future.  He sure plays good music, and keeps people entertained at the party.  As far as I can see, Scratch is really one of the best DJs ever.