Since October 2009, The Mystery sim has had someone occasionally sending anonymous love notes, roses, and presents to sim manager Amythe Moonlight. Always sent through newbie avatars, the real source of what sim owner Tygeria Mirabeau called a “wonderful seduction” remained one of the mysteries of Mystery. Occasionally the Don Juan would take a break, but eventually would remind Amy she had an admirer.

On Easter Sunday, April 24 2011, the “Masked Lover” finally revealed himself, after the sim was done with it’s holiday event.

The event had begun innocently enough, innocent that is except for Amy’s “playboy bunny” outfit that had little fabric on it. Debi Latte was back from a hiatus, her first live performance at Mystery in weeks. The top of the deck was filled with Easter decorations, Easter eggs with prizes inside, an “Alice in Wonderland” globe with Alice and the White Rabbit slowly rotated, and while the Easter bunny may not have shown up, a number of people in kani bunny avs (and a lavender wolfess and frog) showed up to dance. It was about halfway into the party in which the familiar evil laughter echoed across the sim, and Bloodrose joined in, asking Amy for a couples’ dance. 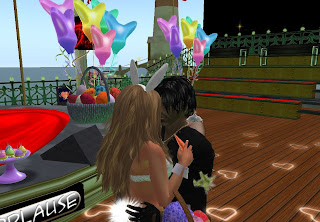 Finally, Debi finished her last song, and people began leaving. When there were just a few others left, Bloodrose got Amy’s attention, brought up the “Masked Lover,” and admitted he was him. Amy was shocked, “It was you?! Oh my God!!” Bloodrose gave his characteristic evil laugh, quite proud in the mystery lasting so long. Debi chuckled, and admitted she was in on the big secret, much to Amy's surprise, “Debi? Oh my God! You knew?!” Blood smiled.

The pair danced together a little longer, then when Debi and one of the staff left, they decided to leave as well. And so came an end to Mystery’s most memorable Easter, and the end to the “Mystery of the Masked Lover.” 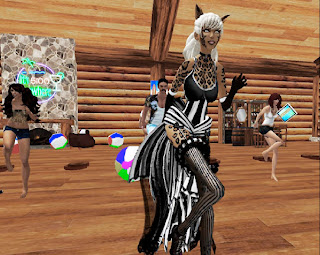 If you are reading this, you are a likely Second Life (SL) addict. Take this quick SL addiction quiz (based upon netaddiction.com)

Q1) Do you think about SL when offline?
Q2) Have you tried to cut back or quit SL? Many times?
Q3) Do you often use SL longer than expected?
Q4) Has SL affected your job or Real Life (RL) relationships?
Q5) Do you become irritated when someone RL interrupts your SL?
Q6) Are you addicted to nicotine, drugs, alcohol, or cybersex?

If you answer yes to any of these questions, you really should take the Internet addiction self test at: http://netaddiction.com/resources/internet_addiction_test.htm 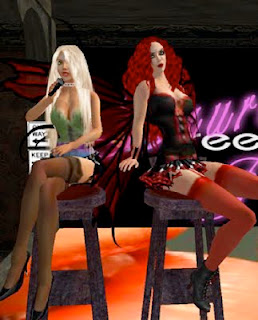 How big is this problem? According to NetAddiction.com and Google statistics, 39,000,000 Americans are Internet addicts, about 1 in 8. And over 400,000,000 Internet addicts in China, Korea, and Taiwan combined, about 3 in 10 people. Woah! That's a lot! And more than half suffer from other addictions!

Experts say Internet addicts "use the fantasy world of the Internet to psychologically escape..." That's a dead ringer for Second Life! OMG!

This Canadian documentary shows the lives of two Second Life addicts. One lady destroys her family life because she is always online, and the other moved in with her Second Life biker BF. Bikers are more fun! lol http://www.cbc.ca/fifth/2008-2009/strangers_in_paradise/

Personally, I know of several divorces and other RL problems of SL addicted users. These problems are obviously more widespread than we can know. What are your experiences? Please Comment!

On yet another addictive night of fun in SL... Pictures= 1 shows a super-fun party at Dumplings country music club in SL http://slurl.com/secondlife/Esterhal/79/110/38

Picture 2 is incredible SL comedian Lauren Weyland shown onstage with the lovely Wytchwhisper, the co-host of The Weekly Look and one of the stars of YAYCats! Catch Lauren's shows 4:30pm slt most Tuesdays and Wednesdays at Lauren's Place http://slurl.com/secondlife/Cookie/128/237/22