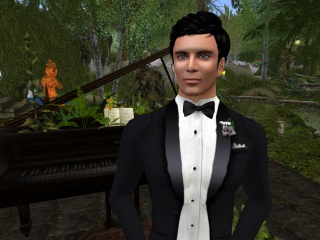 A year ago, Ari (arisia.vita) started playing piano on Second Life.  He is still very much performing.  On the average, Ari plays piano twice a day.

When he  was asked what his best experience would be when playing piano, he said, "To have a stranger wander over and say they like my music." Ari always think it is remarkable to have a new listener friend him.  He consider himself to be lucky to have so many friends.
Surprisingly, Ari does not know how to play the piano in real life. But he would certainly like to know how.  His most favorite composer would be Beethoven, but he counts others as favorites. "I don't need them as I play to bring joy to others." said Ari when he was asked why he wouldn't accept tips.

When asked what his inspiration would be when it comes to playing piano, Ari said, "The words of the great pianist Van Cliburn: "Love music more than anything in the world. Feel that it is part of your life, and without it your life is incomplete. Want to play for people, because if you are a performer you are performing for all people, all over the world; not just musicians, but for everyone."

"My inspiration comes from my friends and audience." said Ari. He is honored to be an inspiration. Besides his piano playing, another hobby of his might be considered helping out others and offering advice. For which piano piece Ari would recommend that his audience listen to while he's not on Second Life, he suggested that they hear the one that they most want to hear. When people in his audience asked for a valuable piece of advice, Ari told them to listen to their conscience.