The Last Sunbeamer Moon Dance For 2021 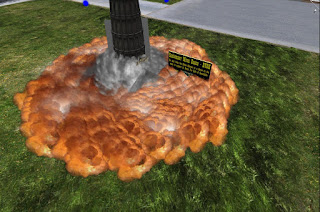 Team Sunbeamers has had a number of events this Relay season. But one was a weekly event, the Sunbeamer Moon Dance that took place every Thursday at 6PM over Farshore Field in Sunlight Bay. People would head over to the Moon Cannon, and get blasted off to the Moon platform where music and fun awaited (along with a few 'bot aliens dancing away). But eventually, there would come a time for a final performance. And on Thursday June 10 came the final Moon Dance for the Sunbeamers, at least for this year.

Most of the weekly dances had various themes, such as Memorial Day and sci-fi. But this last one was "Come As You Are." A number of Sunbeamers showed up, as well as some from other Relay teams. This included several of "Roos With A Dream," noted by their Australian outdoor outfits.  The maximum number of avatars the sim could hold was thirty, and there was a time or two someone couldn't get in. 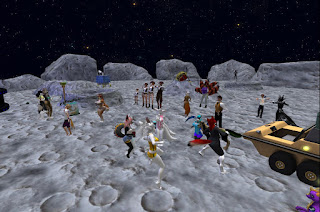 As usual, Cynthia Farshore was DJing, though adding tunes as she went along instead of playing a prepared list. Someone cheered when "Golden Years" was played, "David Bowie, yay!" Sunbeamer team captain reminded, "We have a memorial to Bowie in out camp, died of liver cancer." Of the camp having the theme of a British comedy, she commented, "I told my sister our camp was Monty Python themed.  she said 'Who?'" 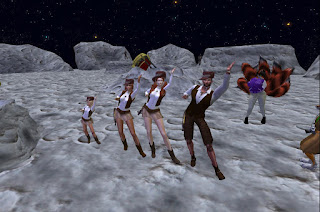 Other conversation topics were a small debate if music past the 1980s was any good: one didn't think so and a few others felt at least some of it was, "there are lots of good tunes every year, we just don't hear lots of them." There was also talk about the "Last Dragon," movie, "Invasion of the Body Snatchers," and the Star Trek "The Trouble With Tribbles" episode. Cynthia responded by playing Shockwave Yareach's music parody, "I Snuck In A Tribble With You." That got some people chuckling. There was also some talk of the Animated Star Trek episode.

With the Relay weekend so close, there was much conversation about it. "I always get emotional when the actual Relay starts. even though I have been doing it since 2008." "The Luminaria ceremony gets to me the most." "I completely forgot I had submitted a dedication to be read the first time I did it. Caught me completely off guard when they read it off and I broke down hard." 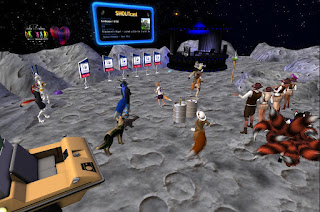 There was also some fun talk about partying people did in the past, "Threw an unexpected party at my house once while my parents were away. Was my friend's birthday and he was hanging out with a bunch of younger kids so me and another friend told him we were headed to my house after picking up some beer. About an hour later, a million people show up. Only trouble I got in from my parents was that I didn't recycle the cans. Was still underage at the time, think it was either the summer before going to college or the summer after my first year of college. No idea how I didn't get in trouble." "I went to a party at a farm once, real BBQ pit, roasting half a pig and various beef, also beer kegs and we mixed up something interesting in a clean plastic trash can. Whatever we mixed up was good, I had it to my van to pass out and woke up with one hell of a hangover." "The wildest parties are always while you're underage." 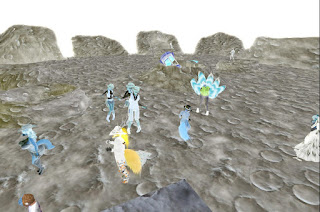 At one point, there was a small square area in which light inside had it's colors reversed. Inside it, at least when looking from outside, white would look dark, reddish tones would look bluish, etc. Panning inside, from within things looked the opposite, including the blackness of space looking white.

A good time was had by all, one lady saying, "Its been a lot of fun hanging out with 'beamers, gems and Purple Tears all season long." Rita responded, "Well we 'beamers specialize in fun. If it's not fun, it's not worth doing." She would say joint events with the Roos had always gone well, and fun, and congratulated them on their success. They'd made Diamond rank some time earlier, and had raised a total of 1,783,000 Linden dollars.

Before long, the party was over, and people headed out. Shockwave and Cynthia would go back to the Sunbeamer campsite to check things over. All were looking forward to the Relay weekend in two days.

As of the writing of this article, the Sunbeamers have raised a total of 834,500 Linden dollars, and are the highest rank of the Sapphire-ranked teams.