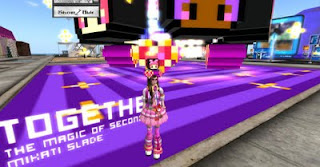 While touring SL8 last week, I had the pleasure of meeting Second Life Artist Mikati Slade at her exhibit, “Together”. The colorful exhibit was one of the most fun pieces of art I have seen in a long time. Her art exemplified the theme of this year’s celebration, “The Magic of Second Life.” When I met Mikati, she was dressed in the same bright pinks, yellows, and reds as her exhibit. How fun!

In real-life Mikati is a digital artist from Japan. As part of her formal education she studied classical sculpture and drawing. Her real-life work experience includes illustrations and graphic design. She is a very bright, friendly asset to the SL art community. 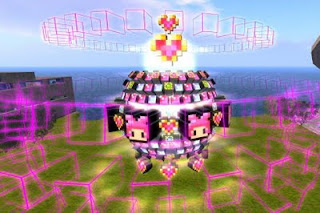 The “Together” exhibit was described in a notecard as “Japanese Pop-style,” featuring “a bright, pixelized sculpture made up of cute figures of various looks and other symbols.” I saw lots of hearts, flowers, and happy objects. Looking at the exhibit made me smile.

On her notecard, Mikati wrote, “People are often inhibited by numerous limits and handicaps, such as their appearance, gender, or age. In envisioning a better future, it makes sense to try to address this issue. In Second Life, people can push aside some of the obstacles that trouble them in real life and live, work, and develop relationships in a freer environment. It's the vision of a better future materialized in Second Life today. This is the magic of Second Life.” 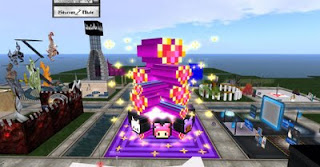 Mikati also has exhibits at a French art sim, PiRats Art Network. More of her Japanese Pop art work can be found there at PiRats Art Network (148, 81, 21). Through her designs, Mikati hopes to communicate her ideas about society and people’s identities. We talked about how Second LIfe provides the opportunity to meet people that we would never have the chance to meet in real-life. “Yes,” Mikati said, “Really that’s magic!”

This was a fundraiser full of twists and turns.

The event started as a follow-up to the “Bid Me Human” event of May 20th for the Relay for Life team Passionate Redheads, in which I volunteered for. To the surprise of everyone, the event raised 29,000 Lindens. Afterwards, DJ and club owner Nydia Tungsten talked about doing this kind of event as well. And soon, came the announcement: 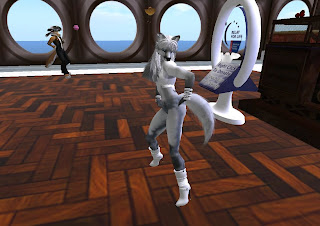 "That's right, for all those that would love to torture this little white vixen, here is your chance. Come bid me Human on Sunday June 19th at 4 pm SL time. First week will cost you $5000 L's each day there after is 1K, so come see how long you can keep me human. This will be held at the H.M.A.S. Little Dove in the beautiful Southern Colorado sim. All proceeds go to Relay for life and the awesome work they do."


June the 19th was chosen partly because that was the day the previous “Bid me Human” came to an end. Nydia thought it would be symbolic if I showed up in my human appearance one last time and changed back when she changed from her fox avatar, “passing the torch” she called it.

But when the weekend approached, Nydia’s real life family wanted to do something that day. Nydia at first thought she might be a few minutes late. But whatever was going on, Nydia felt she had to move the event back from 4PM SL time to Noon. This would undoubtedly disrupt things as some people whom were planning to show might not find out about the change until it was too late. Nydia felt the event wouldn’t raise quite as much as the one the month before. Her goal was 15,000 Linden dollars, which would mean seventeen days without the vixen avatar. 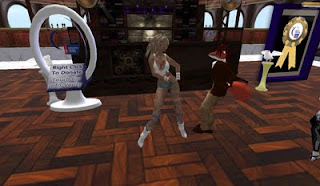 So on Sunday, as Noon approached people began dropping by the zeppelin club, with a kiosk set up specially for the event. But although people were donating, progress was much slower than at the May “Bid me Human.” Possibly it was because this event had many more friends of the volunteer, and they were reluctant to “torture” her. Nydia encouraged the others to donate more. Finally, the 5,000 Linden goal was reached. I changed back to my familiar foxy appearance, and Nydia took on the form of a tall shapely blonde.

The event went on for a while, Nydia getting a few whistles for her shapely appearance and skimpy outfit. A few friends of her were also in human avatars out of sympathy. Eventually she reached and passed her goal of 15,000. The kiosk went up to 18,000 Linden dollars. She was talking about leaving the kiosk up until 6PM as planned for those arriving late. But just after 2 PM, Nydia got a call from her real-life family, and had to leave. After she left, the numbers dwindled away, leaving the kiosk at 18K.

A little before 4 PM, when the event was originally scheduled to start, Southern Colorado’s sim owner Daaneth Kivioq appeared. Not knowing the event had already started and the people came and went, he reset the kiosk and began inviting friends over. He was soon told the news, and grumbled about resetting the kiosk. He then added 2,000 more Lindens, raising the amount raised to 20,000 Lindens, three weeks and a day as a normal human.

Among the others there was RECoyote Mindes, the co-owner of the Spectral Shadows art gallery and the Green Meadowlands Ballroom club, also known as “Perri’s Xanadu.” Just after seeing the amount hit 20K, he stepped forward, “No! Keep Nydia a vixen!” He then added his own amount to the kiosk to get his request, a whopping 30,000 Lindens!! This was close to the equivalent to a hundred and twenty US dollars! Daaneth looked at the amount, and it was his opinion that considering the amount of the donation his wish should be honored.

Why had "REC," as he was known to his friends, donated such a large amount? He felt having to drop her vixen look for three weeks would really be torture for Nydia. 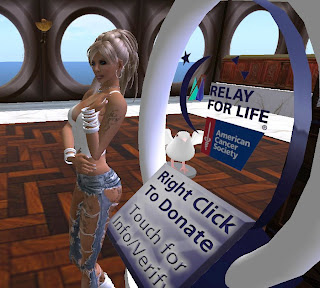 It wasn’t long after this that Nydia arrived back on the Grid and the zeppelin. She got a notice to the Redhead group of the news about what just happened, then asked us for details. When Daaneth told her he no longer considered her honor-bound to continue as human, Nydia felt some Relayers who chipped in might feel cheated. So she stated she would remain as a blond human for 24 hours. Both RECoyote and Daaneth agreed.

Daaneth stated there was some more good news. RECoyote’s donation had given the Passionate Redheads team a grand total this season of over $2000 US dollars. This made the Redheads officially a Platinum-ranked team, putting it well ahead of most other teams.

Nydia had another surprise. Her close friend Leena logged onto Second Life for the first time in a while. With this and raising 50,000 for the Redheads, it was clearly a good day. 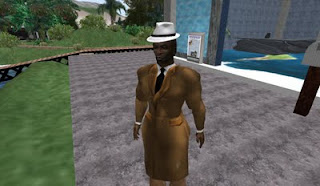