On Saturday November 21, the Caledon Newcomers Ball took place. The event took place at the Governor's Mansion at Caledon Oxbridge Village from about 7 to 9 SL time. The party is to celebrate recent arrivals in the community. "Welcome to Caledon and Second Life! To anyone here who is new-ish," one local spoke after my alt Rezzdammit arrived. Stero Nacht would comment, "We take all kinds! The only prerequisite is not to be bothered by the madness of their neighbours! (grin)" 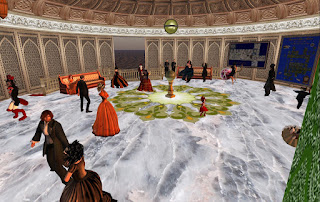 There were a few seats available for those who didn't want to dance, as well as animesh butlers and maids offering drinks. On the wall were old maps of Caledon, one from just after it's founding, and another from a few years ago when it had a few more sims. The music was a mixture of pop tunes, classic rock, and some steampunkish songs.

People talked about a few things. One was a pumpkin carving contest, of which the results would be the next day. Also the following day was an airship race. Someone commented, "I'm a refugee, I needed airspace to relocate my big airship to." Beth Ghostraven spoke, "At this year's Harvest Festival I'm exhibiting some pictures of a long ago airship race." Stereo would say, "I expect it will take an hour or so. The course is quite short. If even I can do it in less than a minute, we should have time enough for a few laps, even if we have to split the contestants in a few groups." 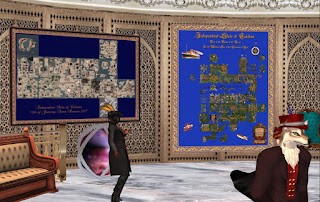 Of new members, Cynthia Farshore stated, "We had quite a few new citizens this year." Stero remarked, "We have a couple of 'not-quite newcomers' whose information had been lost in the mail at previous installments." He added the new members "did not *all* send me info. But I got a decent crop nonetheless!" A KayCooper spoke, "I'm not technically new, but was never properly introduced, so I'm up there too. ... I sort of snuck in while no one was looking and then I was just here all the time." Shockwave Yareach noted one name, "I swear I know the name Soup Johnson from someplace." Stereo chuckled, "But when I checked, he was never featured, so I *slightly* pressured him to provide some info. (grin)"

There was no tip jar, though there was a donation jar in the shape of a rotating Caledon coin for the upkeep of the Caledon Oxbridge University for newcomers. At one point, a number of people were dropping in amounts. Beth commented, "Heavens, that coin appears to be catching fire!" Stereo commented, "It *was* on fire; it is cooling down, now." Major General Badger (halesuhtem Resident) remarked, "I hope the fire systems have been tested recently." Shockwave suggested, "When the machine is on fire, turn it down a little." Stero added, "Pretty much everything is either highly flammable or flame-proof in Caledon. Since the mansion is still standing, I'd say it's the second case. (big grin)" Badger commented, "Flammable or inflammable - I keep getting those two mixed up." "Both mean the same, General!" "Really? Ha, no wonder my insurance company didn't payout." 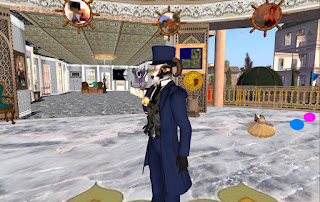 When the song "White Rabbit" was played, Badger commented, "I'm chasing rabbits - damn things are digging up my garden!" Magda Kamenev (Magdalena Kamenev) responded, "I thought rabbits rightfully feared badgers." Shockwave suggested, "Build a steampowered fox." "Oh, that's a good idea." Cynthia commented, "And to think they were imported for sport." "I read recently that a Japanese village with a rabbit problem built a bunch of mechanical wolves." Badger told them, "I'm thinking of putting motions sensors out there hooked to a speaker." Cynthia mused, "What's it going to say General - 'Damn rabbits get off my lawn.'? Magda suggested, "YouTube loop of fox and wolf sounds? Maybe some cougars for variety?" To that, Badger answered, "I just googled cougar sounds - all I got was the clinking of champagne glasses." "Different type of Cougar, I'm afraid," someone responded. KayCooper suggested, "Train the bandicoots to team up and chase them away." Badger responded, "The rabbits and bandicoots just nose kiss each other." Cynthia then mused, "Then cops come in with siren from all the neighbors reporting a bunch of wolves, cougars, and God knows what else are running rampant all over the place." 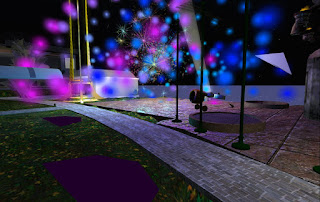 Other songs got more conversation. When one Voltaire song played, Shockwave chuckled, "When you're eeeevillll ...." KayCooper added, "This song is so catchy." Badger misheard one line, "I'm the pea in your soup." Magdaresponded, "Um, don't most people like pea soup?" Badger grinned, "I misspelled pea," Shockwave chuckled, "Urine trouble now." KayCooper joked, "Don't let the bandicoots near your soup." Badger commented, "They have gourmet tastes." Magda commented, "I'm trying to think of a response that wouldn't get me thrown out of Caledon, and I'm failing." Badger then handed her a 'get-out-of-trouble card.' She then tucked it into her pocket, intending to use it "for the next time she gets near the Guvnah."

There were some other lines of conversations. And near the end, there were a few fireworks from outside the building. The dance was pretty much a fun event for all.

Posted by Bixyl Shuftan at 3:00 PM No comments: