On Monday June 21 at 2PM SL time, there was a special episode of "Lab Gab." For the first half of the show, Linden Lab's Executive Chairman Bradford Oberwager was interviewed as Oberwolf Linden, his first public appearance inworld. The interview was done by Strawberry Linden. 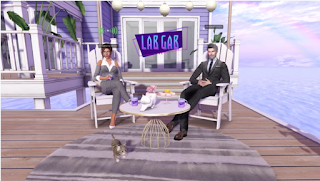 Oberwolf stated he was happy to be interviewed, "This is quite an honor. ... Although it's one direction, it's a wonderful thing to be able to communicate with the residents, and I'm very excited." He had gotten to know Second Life through "a very very good friend of mine," Philip Rosedale, the founder of Linden Lab. "Philip and I have been friends for a decade," and Rosedale's wife one of his best friends. He goes with Rosedale to the Burning Man festival, "in his RV." He gave one amusing story of trying to catch up to the RV once through an Uber car. "I see him once a week because he lives three blocks away from me," usually meeting Friday afternoons. "He and I are very close. ... He probably has a larger impact now, since I tell him what's going on. ... He's an advisor to me."

Before, he and Rosedale had spent hours and hours talking about Second Life, "and what it means to the world." He had heard from various folks of Linden Lab looking for a buyer. Called it "a tough company to buy. So we spend a lot of time talking about it, and then it turned out ..."

Of Ebbe's passing, Oberwolf would say, "Losing Ebbe created a void in so many people's hearts," among both those who knew him personally as well as in Second Life, "This was not an easy thing ... more than just part of the company. ... Anyone who touched him in any way know he was kind and smart, dedicated, fiercely loyal, independent," and Second Life was near and dear to him. "It's rare that you get an opportunity to meet someone that you respect in a business sense that you want to emulate ... and also just like. He was just so personable." Altberg also had a "sense of inclusion" that was sincere and "not a business tool." "What makes this so hard is because his presence was felt by everyone." Oberwolf felt because of Second Life's uniqueness, Ebbe Altberg would live on inworld, and his impact will not go away, "that ethos doesn't go away when the person goes away ... hopefully we can continue that legacy."

Strawberry then asked what led him to acquire Linden Lab. He responded, "When you buy a company, you look at it different ways." There's obviously a financial aspect, but there can be other reasons besides that, "What's interesting is who the purchasers are, and what their desires are. There's a big difference between being owned by a venture capitalist, by a PE firm, by another company, or by individuals." He described venture capitalists as pumping their acquisitions with more money with the goal of large returns, "and are willing to fail nine times out of ten." A private equity firm will cut expenses and make other changes with the purpose of selling it for a profit. A company that buys another will invest in the new holding, "but probably changes the culture. And then when you have two indivudals like Randy (Waterfield) and I." They had a number of reasons. Oberwolf stated he once didn't believe businessmen who told them they had so much fun they didn't think of their job as work. But of Second Life, "while I still think it's work, I will tell you that there hasn't been a day yet where something hasn't made me laugh ... this is a passion, not an investment."

On who technically owns Linden Lab and who makes the decisions, Oberwolf answered that technically, the Lab is owned by an LLC (Limited Liability Company), formed by him (Brad Oberwager) and Randy Waterfield. Waterfield has a good deal of financial experience, while he has the entrepreneurial background. Both sets of skills he feels will help both Second Life and Tilia. Of product decisions about Second Life, this was the leadership team of Patch, Grumpity, and Brett Linden. He commented, "When things go well, everyone had a part in it. When things go poorly, that will fall on my shoulders." He is consulted on "really big things" on the direction of Second Life, "I'm part of the brainstorming team." He's involved with both the finance and the business decisions. But he felt, "The ultimate decision-makers are the residents. ... Nothing that we do works if the residents don't accept it." He was also interested in feedback, "There are some very good ideas. We just want more of them."

Strawberry's next question was about Oberwolf's experienced inworld, bringing up his appearance in a business suit and a trimmed beard, black mixed with gray, "I like your avatar." He responded, "This is my avatar for anyone who knows me, professional avatar." Going on as that, people recognize him as a Linden right away, and eventually some figure out who he is. He did have others for going about Second Life anonymously, which was obviously very different, "I don't think it's a secret that Second Life is hard to get going." Interested to see how it was, he refused help from any other Linden. He did find it curious that when he downloaded it onto a Mac, he got a warning, and wondered if new users would think they were buying malware, "That was my first experience." Once inworld, he went to London City, and found the people there helpful. As he was still learning the "etiquette," he offered Linden dollars, and people were walking away, "That was a learning experience." Among the help he got was when someone told him, "Did you know you're wearing thirteen jackets?" He then talked about on his own getting a wolf tattoo for his chest, as well as a jacket that could show it, "And when that happened, I was hooked." He still goes "underground" as he put it, "I will never break character."

Of the future of Second Life, Oberwolf's plans, and what the residents can expect, he answered that the community can expect them to be a part of it, "What I want is for the community to be part of our success." He was interested in hearing about their goals as a community, "How do we work together to bring Second Life forward." Ignoring the past he felt would be silly, but he didn't want "it's always been done this way," which he commented was a dangerous thing in both business and life, "If you don't embrace change, you will like irrelevance a lot less. We don't want to end up irrelevant. That would be the worst outcome." On the other hand, "We're not going to change for change's sake. ... We're going to look at this, and we're going to see how do we evolve." Obwewolf compared it to a party that had been going on since around six in the afternoon, it was currently 10 at night, and there was the potential for it to keep going as long as people kept arriving to replace those heading out, "I don't want this party to end." He hoped that more people would find out about Second Life, come in and experience it, "and have it be a part of their life."

To those residents whom didn't want change, Oberwolf stated change of some kind was inevitable as some people leave, some arrive, and the technology of the computers used changed. He brought up the move to Amazon Cloud servers, saying it was done for the residents, that it actually costs more to run things on them than standard hardware, "that decision was not made for financial reasons. That decision was made to have a better experience for the residents. Of how the residents could best help, he stated, was to continue to give the Lab ideas, to bring in more people, "and make them stay." Oberwolf talked about "four pillars" of decision making, 1 - What's going to bring in more people? 2 - What's going to make current residents happier? 3 - What leads to more engagement? 4 - What makes the Lindens happy? "I want happy people working on things, because then it's going to be a more better experience."

And how did Oberwolf envision Second Life in five years? He made a comparison of Second Life to a country, with islands, infrastructure, which allows people to interact, a rule of law in society in order to protect people and allow them to better expand. Part of what made Second Life attractive he felt was that it was a very libertarian and very open community. While people could more or less do what they wanted, there were some specific rules about it. But a financial system was needed, important in both in real life and Second Life.

Of Tilia, Oberwolf called the idea of "Tilia versus Second Life, that's a misguided framework." He went on to say by understanding more of Second Life's history, then Tilia makes sense. Since the start, he stated, user-generated content has been a part of the virtual world, "creators are the backbone," and this with the trading of land makes an economy as one of the reasons creators build is because they can make money. And with Second Life, sellers can trade directly with other residents without the involvement of the Lab, which is one way it's different from other virtual worlds, "Second Life is the only game in which the creator actually sells directly to the buyer ... In Roblox ... the money goes to Roblox." He compared Second Life commerce to eBay, which didn't touch the money, but it needed Paypal in order to be as successful as it had been. "We created a Paypal experience so that this money could go back and forth." The movement of money needed to be regulated, "Tilia is the company that actually owns the money transmitter licenses." And through it, content creators and other people doing business in Second Life can convert Linden dollars into US dollars and other real-world currencies. "Tilia was born out of Second Life. ... Originally they were the same thing, but because of regulations, we separated them out." So now the two were separate entities under Linden Lab. And now being separate from Second Life, it was now open to others who wanted to use the service for financial transactions.

When asked if he had any last minute comments, Oberwolf acknowledged that he realized an ownership change could lead to fear and worry among some, and possibly anger. Anger he called a proverbial canary in a coal mine, "You don't want to see anger." Anxiety, as a fear of the unknown, can be more easily reasoned with as with knowledge about the subject anxiety goes down. What emotion he hoped to see from the residents was joy, but felt it wasn't going to come directly from him, only by better enabling residents to make one another happy, "If you bring in other people, that's a sign you're having joy ... you want to share." His last comments were about the Coronavirus crisis, "In a time when we should all be coming together, ... the only thing that's saving us from Covid is by staying apart. ... But where can people come together? Second Life. It is the best place for people to come together. To find joy in this awlful Pandemic ... Second Life is the answer."

It was then Strawberry thanked Oberwolf for his time, and there was a break featuring the Second Life commercial that got attention. And later on Strawberry would interview the leadership team of Patch, Grumpity, and Brett Linden.

The video of the interview can be seen (here). To skip ahead to where Strawberry Linden interviews the Leadership team, (click here).