On Saturday, 23rd October, Phemie Alcott and Didier Soyuz launched the release of their collaborative CD, 'Whispers in the Underground,' at Phemie's venue, The Firefly. Both uniquely talented individually, together they have created a sound all its own. 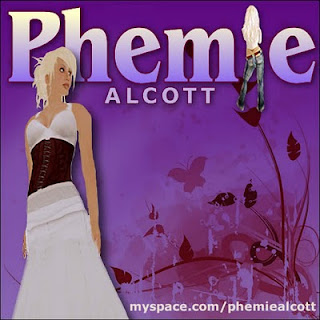 Phemie has gained the adoration of her fans with her bubbly stage presence and tendency to giggle. Often described as having the voice of an angel, Phemie's first love is piano though she transitions with ease from guitar to piano during her performances.

Phemie has been writing and performing music since the 90's and was a member of a local alternative rock band in her home town of Pittsburgh. Following that, she attended school for Music Education and Voice Performance. Currently, she performs classical voice with a professional ensemble in Pittsburgh, as well as occasionally performing at open mics around town.

Meanwhile, on the other side of the pond, Didier Soyuz began "touring" SL in 2006, performing original, accoustic guitar instrumental pieces. In contrast to Phemie, Didi does not sing and has quite a laidback persona . He does, however, speak and always makes a point of acknowledging everyone in the crowd (in his mumbling Brit-speak). A Didier show is always a treat with fresh originals and popular favorites, such as 'Free Your Heart' and 'Face to Face.' Didi also performs live in SL with his RL band, Bouski. 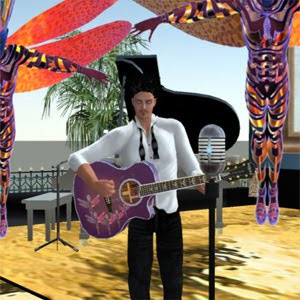 After attending many of Didier's shows and loving the music, Phemie got the idea to do some music with him. Going through Harrie Skjellerup (owner of The Jester Inn) as a sort of "middlewoman," Phemie explained her idea to Harrie, who then conveyed it to Didier. Didier responded saying he would love to work with Phemie. Collecting her nerve, Phemie approached Didi directly. Through the beauty of email, Didi sent a tune to her to see what she could do with it. Phemie began woking on melody and lyrics and they soon had their first song, 'Chameleon.' Pleased with this first collaboration, they continued with Didi sending tunes and Phemie writing lyrics. Eventually, they had enough material for an entire album. The process of recording it was simpler than one might think. After receiving a tune from Didi over the airwaves, Phemie plugged it into her recording software, added her voice and sent it back to Didier. He would then "mix down the tracks or add effects or instruments, "adding a lot of reverb and "pushing through" Phemie's voice. Once they decided on the overall mix, VOILA! a Didier/Phemie song was born. 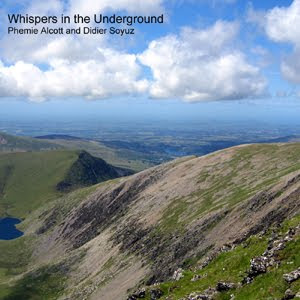 Of Didier, Phemie said, " It's been such an honor to work with him. I have the utmost respect for his talent and his music. I try to honor it when I write for it."

'Whispers in the Underground " may be purchased via the following link: http://www.cdbaby.com/cd/alcottsoyuz


Shellie Sands
Posted by Bixyl Shuftan at 12:10 AM No comments: