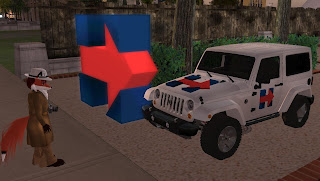 The results of US Presidential elections always bring out cheers from those who won and some sadness and sometimes a little anger from those who didn't. For instance in 1992 with the election of Bill Clinton, Democrats called it a new generation coming to power while Republicans often moaned the White House was in the hands of a skirt-chaser. But the 2016 election season had been an especially intense one. Both major political parties fielded controversial candidates, and partisans again and again stated the election of the opposing candidate would spell disaster for the country. On Election Day on Tuesday November 8, the country went to the polls, and in a tight election that wasn't decided until almost Midnight SL time, the Republican candidate Donald Trump was declared the winner. 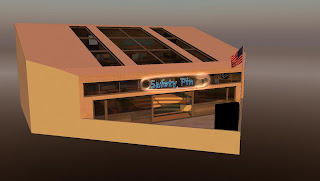 For conservatives, many were celebrating and/or breathing sighs of relief. But many liberals took the results with shock and dismay. While that Trump was a political rookie was occasionally a source of worry, more often many feared his over-the-top statements made during the campaign were a sign that he and his allies would make an effort to roll back their rights.

It was several days later that Evangeline Ling, the leader of the Hillary Clinton HQ in Bay City during the election, decided to do something about these fears. So she announced in the Clinton HQ group, "We are launching our post-election support group appropriately named SAFETY PIN. The purpose of this group will be to provide a safe space for people negatively impacted by the election to process it and to support each other." On Thursday November 17 came another notice, "We will be launching our 1st support group meeting on Tonight, November 17th at 7:00 PM SLT Please come join us. Then if you would like to take some time to process your fears, hopes, and experiences about this election.  It's been a stressful week for many of us I know. If you know a friend who is struggling with this in SL please bring them with you." 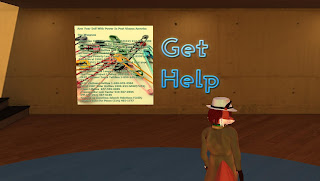 The location of the "Safety Pin" meeting was in a two-story skybox high above Bay City, above a spot marked by the symbol of the Clinton campaign, and a car with it painted on the hood. Evangeline greeted the number of men and women present. The people there expressed a great deal of fear about the future, some for their physical well-being in real life. Seeing me, Evangeline requested that everything stated in the meeting be off the record, as well as no pictures published from inside the building on the second floor unless the subject gave his or her okay later. But she did say she'd be willing to talk later.

Later on, Evangeline told me she had been doing security for the Clinton HQ, and had to deal with quite a large number of griefers. Of the Trump supporters, "it's too easy to just say they are all a bunch of malevolent racists. I see them in the categories." The majority she felt were "white working voters mostly concerned about the economy and changing the system. Hillary failed to really fully address their concerns so they went with Trump who was a big FU to the system. I actually have a great deal of empathy for them." 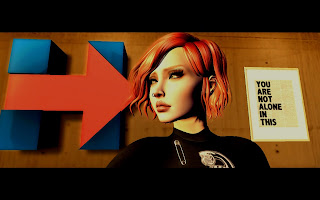 The second group she felt were mainly motivated by their hate and/or fear of Clinton, "they might not even actually like Trump. My Stepdad thought he was a total idiot, but voted for him anyways because he was not a Clinton." The third group was the "Alt-right," which she felt was a sanitized name for white supremacists and other outright extremist groups that were essentially fascist, "they will be the ones throwing out antisemitic memes, Pepe the frog memes, neo-nazi memes, etc. They are very social media driven."

"My biggest fear of this election is that Trump has made people in the Alt Right more comfortable in being OUT about their hate." She described an incident at a Chili's restaurant in Texas in which a black veteran had his meal taken away, "Chili's has since apologized to the vet and removed the manager. But why did this have to happen? ... Trump has, even if not directly or intentionally, emboldened those with those views."

I asked her where the idea of the safety pin as the group's symbol come from. Evangeline told me, "we decided to go ahead and use the safety pin since it became such a phenom in real-life. It actually was a symbol people used after Brexit in the UK." When I brought up that some conservatives were poking fun at it, she answered, "They were going to make fun of us no matter what we called ourselves." 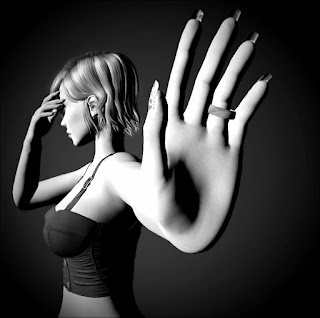 On her Flickr page, Evangeline had a message for Trump supporters. "If you are celebrating today congratulations you have gotten something you wanted and as much as I disagree with your choice there is a part of me that is happy that somebody found some joy in this decision. But right now there are many things that you are doing that will cut off a person like me for a very long time, possibly permanently." Among her comments was one about illegal aliens, or "undocumented immigrants," which I asked her about that, saying conservatives were highly unlikely to change calling them the former, her answer was, "we will continue to call that an offense against human dignity to refer to a person as an illegal."

So what did she think lay ahead? "I think two years of disappointment for sure," she answered, "Then I'm putting hopes that we can take back the Senate, and maybe lighten up the House a bit." She was hoping Tim Ryan of Ohio would be the next Minority Leader of the House, "he has a plan to reclaim moderate blue collar voters ... who may have tilted Trump this year. ... But honestly, I will not breath easy until Trump is totally out of office altogether.

Asking about future meetings, Evangeline told me the next one would be on Friday November 25 (today), the day after Thanksgiving, at 7PM SL time, feeling some right-wing minded family members would be rubbing it in at the family gatherings, "We are gonna get out our post Thanksgiving detox that day after any potentially explosive dinner table convos. ... My thoughts are Uncle Archie needs to lay off Meathead this Thanksgiving and stick a turkey leg in it." After that, events would be on a floating schedule, with plans for two events in December, "after that we might go down to one meeting a month, will have to see."

Since the first support group meeting, the situation in politics continues to change. The protests in the streets in many cities seem to be quieting down, though the worry remains. The President-elect is still selecting members of his administration, some choices seen as sound, others raising eyebrows. Evangeline may have her support group meetings around for a while.

Hamlet Au has also written about the support group, his article here.

For those wanting to be at the support group meetings, contact Evangeline Ling for a landmark.

Commentary: The Pygmalion In Us 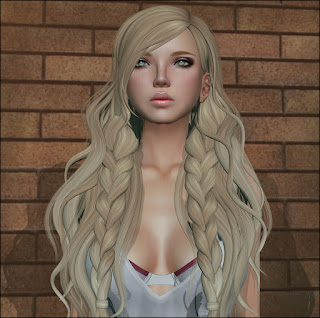 I have been reading about the Greek myth of Pygmalion and Galatea recently and I found myself thinking that we all tend to be just like Pygmalion.  For those who are not familiar with this legend, here’s a quick note about it.

Pygmalion was a sculptor who lost interest in women as he started to notice all their various flaws.  He started to fashion a sculpture of the perfect woman which he made out of ivory.  He worked on the sculpture for a long time, polishing every single detail to create a woman devoid of flaws.  Pygmalion fell in love with the statue and started to make offerings at Aphrodite’s temple (Aphrodite is the goddess of love in Greek Mythology).  When he returned home, he realised that Aphrodite had given life to the statue whose name was Galatea.  Pygmalion wed Galatea and they had a son… the typical happy ending.

I feel that we tend to be like Pygmalion in Second Life.  For instance, take a look at our avatars; they are a reflection of what we want to be.  Whether we opt to look like humans, furries, tinies or any other kind of avatar, the idea is to reproduce that perfect version we have in our mind already and try to reproduce it until we become satisfied.  Just like Pygmalion, we will improve the details and make modifications to our avatars to our taste until we reach the ideal avatar.  Hence, while some people look like dark creatures, others go for glamourous looking avatars and others can opt for legendary characters.  That also means, getting the right shape, skin, clothes, hair and accessories. Each person has his own vision of the perfect avatar he wants to be. 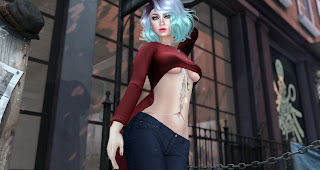 Other residents can also suggest ways to improve someone’s avatar and hint out that they need a makeover to look better.  A person can be satisfied with his own avatar’s appearance even though people around him don’t like certain aspects of his avatar.  That’s again because we each have our own idea of the ideal character and it’s the Pygmalion within us that wants to emerge and change that avatar to our own liking.  Let’s take a common example, you meet a newcomer inworld and you notice the default avatar.  You decide that you want to help him improve his looks, get a better shape or skin, buy him a new mesh body or take him to your favourite freebie spots that has the nicest clothes, etc.  Usually this new resident is just going along with your instructions as he’s trying to understand what he is doing.  That’s the Pygmalion within you creating your version of a nice looking avatar.  Your new friend may love it or he may tell you that he preferred his default avatar to this new updated look.  You may feel a little annoyed at that reaction or completely offended and wondering if you just wasted all your time on an ungrateful person.  Well, that’s not the case.  This person may not feel comfortable in this new look because it does not represent him or what he wants to be.


Sometimes, we agree to look as others deem ideal such as when looking for a job inworld.  In certain jobs, having an updated look is a must.  In the second life modelling industry, generally you need to be very updated on your overall look in order to get selected for a job.  The same goes for other sectors.  For instance, if you want to work in an adult club, you need to look the part as well.  At some clubs or other businesses, you must abide to a specific type of avatar. The boss or the industry becomes your Pygmalion as you adapt yourself to the criteria demanded to work there.  In any case, if you want to work somewhere where looks do matter, you should expect to be told to make certain changes to your avatar when you go to work.


There’s nothing wrong with being a Pygmalion.  We each have our own idea of the ideal avatar and our views will definitely differ from each other.  Thus, we all have a Pygmalion within us, even in this virtual world.

Mylie Foxclaw
Posted by Bixyl Shuftan at 6:00 AM 1 comment: