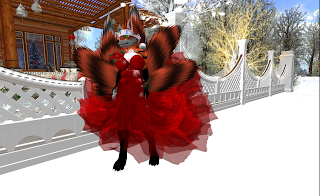 Matt Carlton is a DJ who I was lucky to meet up with for an interview.  Shi is six years and 11 months old in Second Life.  I asked hir how long have she been Djing. "Okay," shi said. "I have been Djing for at least six years. I started on one of my alts, Vulpine Vepper as a classic rock DJ at the Blood Pit and Temple of Chaos, so maybe more like ten years plus ago.  Time flies."

Matt added that shi had also DJed for YIFF, F.A.P. (Furries at Play) and a handful of other clubs before switching to primarily country.

I was wondering what inspired hir to be a DJ.  Matt replied, "Well, I always loved music and used to love singing in choirs as a kid, but was always scared of the crowd.  I once even went on Nashville Star, but dropped out during callbacks due to fear.  I used to hang out with Trevalyn and Kytec a lot at Rainbow Tiger and various places, on my oldest account from 2005, Kavori.  They started to peak my interest in Djing and helped me to learn to use SAM.  Though I didn't start DJing til much later as Vulpine."

I asked Matt if shi continues to plan continuing her account as a DJ because in my opinion, shi is an awesome DJ.  "I do," said Matt, "As venues change or come and go, and friends come and go I may take breaks, or move around as needed, but I still plan to DJ as long as I am able.  Right now I'm putting my time and focus on Djing for RFL events as it's something I have been a part of since I could first walk in real life, with my grandmother. And right now it's one of the few ways I can help." 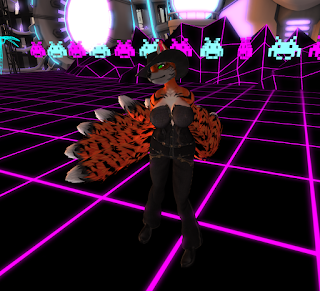 I was curious about if Matt is planning on Djing at a Relay For Life event.  "I did, DJ once for the Home and Garden Expo," replied Matt, "That was a lot of fun.  Since then Olde has been asking me to take at least one slot for the Fantasy Fair.  I might do so, as it sounds fun a well.  I am also competing in the 2020 Celebrate - Remember - Fight Back Top DJ Fundraising Competition.  My first round is on April 1 at 7 pm in Arinutltra Bay at the Pond Stage.  I was also asked by Jeremy from the SOS group to do a late night set for his team, Relay for Christ, one night in April.  I agreed to do so."

I told Matt that I was wonder that beside being a DJ, some people would consider hir to be a mentor or 'true friend' meaning someone who would support them even in difficult times with hir thoughtful words, what is hir feelings about this.  At first, Matt was confused until I explained to her that there is more to being a DJ than one might know.  "Well," Matt responded, "for a mentor, I would be a bit surprised because I know I may not be the best person to open up to at times due to my mental issues. But I try my best to listen, even if I may be terrible with advice and often seek it myself.  As for a 'rue friend,' that makes me happy, as I think that's rare thing these days.  In these tough times, we need good and true friends more now than ever." 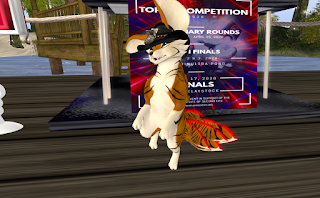 I was also wondering about Matt being an inspiration, like helping out in Relay For Life, and what her opinion is.  "Inspiration, eh?" replied Matt,"I'm honestly at a loss for words to that, as I never have seen myself as interesting let alone inspiring.  Different maybe, odd yes. (laughter) But, if people are inspired by me, that's great, I just hope I inspire them in a good way."

I was very curious to what her favorite coffee is and she said, "Well that comes down to a drink from a local shop called Mudhouse.  I love their Mudpupple frappe, as well as their Frozen Unicorn drinks."

I asked for hir permission to mention that Matt is my Second Life sister and she granted it.  Thanks, Matt!

This had been an amazing interview.  I can honestly say that Matt is one of the awesome DJ.  As the interview ended and we continued talking, I just know that not only is Matt an interesting person, shi is also a caring person especially when it comes to helping fight cancer with the Relay For Life.

Editor's note: As mentioned in the interview, Matt is part of Penny's SL family. The interview was done in late March, before Matt took part in the DJ competition on April 1.
Posted by Bixyl Shuftan at 6:00 AM No comments:

News and Commentary: Have a Second Life Contingency Plan 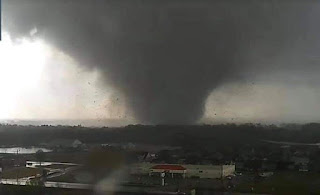 In college, I took a whole course on business contingency. Contingency is “a future event or circumstance which is possible but cannot be predicted with certainty.” Everything is contingent. Whether you go in to work tomorrow depends on if work is still there. Whether you go home at the end of the day is contingent on if  home is still there. For many in my real life community, both are not still there. Not only has COVID-19 shut many businesses in my area down, an EF3 tornado dropped down a few blocks behind where I live on Saturday afternoon, and tore through the business district, grew into a massive wedge, and leveled homes. There were no casualties thanks to advanced warning and many being home because of COVID-19, but many people no longer have jobs or houses to go back to. The local mall and a handful of businesses are practically destroyed. If the tornado had dropped down sooner, I wouldn’t be writing this.

Here’s the important part: Second Life should be the furthest from your mind in life threatening and/or natural disaster circumstances, but wouldn’t it be nice if you didn’t have to worry about it at all? Why wait until it’s not possible to do anything about your rent meter running out? Who will inform your Second Life friends of your whereabouts if you’re not able to get online? There have been a few instances when this publication has had to send out a call for help to discover the whereabouts of a missing Second Life resident.

In my business contingency courses, we learned to write up a contingency plan for when the unexpected should occur. For instance, who would be in charge of things if the manager is out? A Second Life contingency plan doesn’t have to be as elaborate and drawn out as a business contingency plan, but think of who you would trust to help you pay your rent meter or tell your friends of your whereabouts if something should occur. Be sure that you can contact them offline or at least let them know that if you disappear one day to please help you with contacting friends or paying rent for a certain amount of time until you get back. I always keep at least two weeks on all my meters in case something happens like a week long power outage. Do you run a blog or website based around Second Life or do you run a sim or a club? Who do you trust to run those while you’re gone? Think of any possible thing that you can see not being taken care of if you vanished for a month and write it down and think of who can back you up in a time of need.

In these times of uncertainty, it’s good to have a plan in real life as well as Second Life for when things go horribly wrong. COVID-19 has had me thinking about this, and the tornado this weekend finally inspired this article. Don’t wait until it’s too late.


Cyfir
Posted by Bixyl Shuftan at 6:00 AM No comments: