SLife And Times: Two Sides of Banned For Being Furry

For most clubs in Second Life, it's not a big deal what you look like as long as you can fit through the door and behave yourself, especially if you tip. Being the lone furry or tiny at a mostly human club, or the sole human in a venue of furries might get you a few odd glances, but it's my experience seldom is anyone rude about it. If there's a contest that night, you might actually get a few extra votes and win as you're instantly recognized. 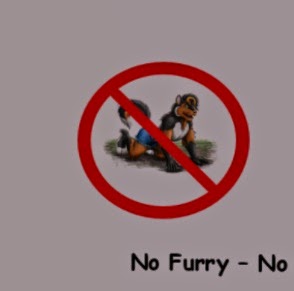 But as most people in Second Life know, eventually you're going to run into someone who has a problem with your looks. This was the case of one furry friend of mine whom was invited to a venue by it's hostess, and got booted because the rules of the place stated only human avatars were permitted, "I was sent an invite, to a club, only to get told I have to leave for being ME!" His name was an obvious clue to his avatar, "She KNOWS I'm furry. What the frack would someone knowing I'm no human invite me for?" He was furious, "I want to go back and torch that f**king club." But once he had a moment to calm down, suggested I try to get the point of view of the hostess, if she was willing, if I was going to write about the event. He did admit that the word "human" was in the invitation he'd gotten, but didn't realize it until after he came back from being away from keyboard pressed the "accept" button to the teleport request, so the part about it being a human event had faded away after several seconds before his return.

Contacting the woman in question, once she heard her name wouldn't be mentioned in anything written she only asked that the article be objective, "This is an important subject, I think." She was tired though, and trying to set up a time eventually we settled for answering questions by notecard. She had first met the fur in question through friends and had a positive first impression. Where she was hosting that night was in a formal ballroom, "In the ballroom it is clear that it is humans only. On the rest of the sim, everyone is welcome as long as they are covered. Not only is it clear in all the literature, the TP I sent that ******* took was very clear. To wit: '? I'm hosting at romantic *** **** ****** 2-4 PM w/ DJ _________, International Romantic Music. Join us? FORMAL, HUMAN?'"

She described the situation after the fur in question showed up, "I knew as soon as he landed as a furry that he was in violation of the venue's policy but there was no pressure. As host, I was in charge of dress code violations (DCV). One of the owners was there, as was the manager. They were very relaxed, both welcomed him in local chat, as did I, calling him my friend." She told me she decided to do nothing as long as no one complained, "****** was there for over an hour before anything was said about him violating dress code. ... The owner responded that Raccoon was my friend and that I would take care of it. ... When the guest complained, I reiterated that he was my friend and posted some comments I always make in support of furries when I see exclusion. One is, 'Did you know RL furries donated 12 Million to charitable causes last year?' ... I had to apologize to him on IM and remind him it was a human only ballroom. I have many furrie friends and always feel badly when they are excluded though I know from speaking with them that they are used to it. I also respect that each venue has a right to design and run things as they choose. My responsibility is to abide by the rules and in some instances, enforce them."

She would go on to say that avatar discrimination happened in other places in Second Life, "There are many exclusions in SL. Children are not allowed some places, non-human AVs, pregnant AVs, collared AVs, or particle emitters, for instance. As a woman, I am excluded some places. Sometimes it for dress, like 'must be nude.' I've been ejected from venues for non-compliance with that rule."

The way she saw it, the fur had fair warning, "He had notice before coming that it was human only so he chose to come as a furrie. He and I chatted, we all enjoyed the event, no one said anything until one of the guests complained." She did acknowledge that he was booted by the owner instead of being allowed to walk out on his own accord, "He said he would leave rather than create drama. Then he posted other's text in local chat, creating drama, disrupting the event, and violating TOS."

That last detail was the one big difference between how the two persons described the event. Talking to the fur later, he told me he never posted any IM conversation out in the open, "I have transcripts of everything." He also stated he was there for less than a minute before being asked to change. As mentioned earlier, he did admit to accepting the teleport request before noticing the word "human" in the invitation, but he had been away from computer, and the notice about it being a human event had already faded.

The hostess did have some final words, "We have the perfect opportunity to make something positive of this unfortunate incident. My personal philosophies and practices are to celebrate diversity and promote inclusion. When we were planning the .... Clinic, some administrators wanted furries excluded but acceded to my argument on why they and everyone should be welcome. The salient points here are that being an activist can be noble, valuable, and serve the greater good. There are ways to be an effective advocate and ways to hurt your cause. ******'s behavior in this instance gave all those there valid reasons to exclude furries, setting back rather than helping. If you feel furries (or any group) is excluded, make a valid and rational case for why this should be reconsidered. I have shared a few of the points I use. Respect the venues. They have no obligation to follow any course other than their mission or business plan. If the venue is considerate enough to state an exclusion policy so there is no surprise, be grateful. Speak privately to the owners if you would like them to reconsider their policy. If you wanted to be respected and treated well, act that way toward others."

The idea of being grateful and respectful in the face of being given the boot is likely to be too much for many of my fellow furs in Second Life to ask for. They are very proud of their looks, and will see exclusion as an insult to who and what they are. A historic RP area such as 1920s Berlin they can usually let slide as the idea is to make it as close to the history books as it was. But a venue that's purely for entertainment such as the infamous "Frank's Place" that sees a furry avatar as the equivalent to ragged jeans and a t-shirt at a high-class establishment, that viewpoint is seen as a pile of waste matter.

Looking at the hostess' comment about "exclusions" one way, it could be seen as saying discrimination is a part of Second Life, and there's nothing that can be done about it. But looking at it another, it could be seen as saying not allowing someone into a club just because they're furry (or because they're not) is as justifiable as saying women are only allowed in if they're naked without anything covering their private parts.

While the Newser has written about this kind of situation in the past on occasion, fortunately, this kind of incident is rare. The amount of time I've been asked to leave a place because of my having a furry avatar can be counted on one hand after over thirteen years here. I've been to high class places with first rate musicians that while asking me to be neatly dressed didn't have a problem with my avatar. One investigation of a place in which someone was thrown out for having a nonhuman avatar revealed that there was a nonhuman on the staff and the incident was likely the result of a hostess' inexperience. Of those who prefer human avatars, most would rather be in places where they can invite their friends. One SL church operated for months with a number of furs in it's flock before getting a new pastor whom then insisted on "keeping it real" and telling the parish human avatars only. The majority of people, humans and furs alike, left.

So while this sort of thing does happen once in a while, it shouldn't define our Second Lives. It's best to take ourselves, and our tip money, to places that appreciate our company.

Addition: It turned out that the hostess had no problem with her name being given.