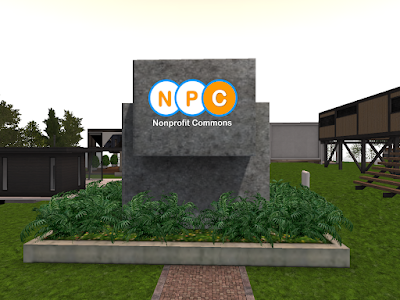 I have been over to the Nonprofit Commons several times in past years to pick up materials for an event and  always thought I really should check into this place and write about it. I had perfect opportunity when Gentle Heron sent me an invitation to a meeting and the 14th anniversary party August 20. So it was a perfect opportunity to get to know about it all. 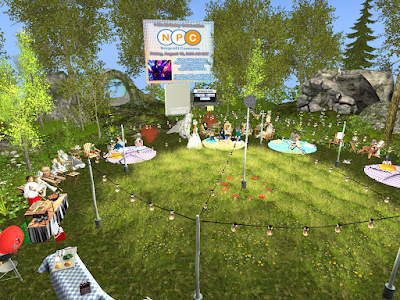 I arrived while Rhiannon Chatnoir,  AvaCon lead and Community Leader ,welcomed  everyone to this special weekly meeting which was also a celebration of the 14th anniversary of the NPC Commons. She spoke of the spirit of the mission of the commons focused on community.

The Mission  as stated on the website is “The mission of the Nonprofit Commons is to create a community of practice for social-good to explore and learn about virtual worlds, foster connections, and discover the many ways in which nonprofits and others might utilize these unique virtual environments to achieve their missions”. The NPC is peer governed and funded.

After the welcome there was open mike where members were encouraged to speak of the projects and organizations in which they might be involved and how to reach them on line. 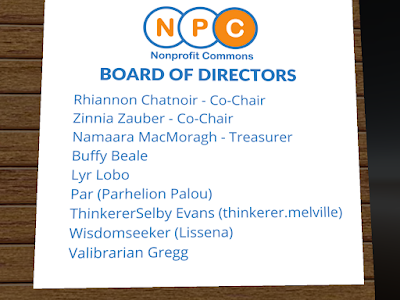 Many offered information on their own missions in Second Life. I was familiar with so many of the members. To mention a few, ThinkererSelby Evans (thinkerer.melville) was there as well as Gentle Heron of Virtual Ability, Valibrarian Gregg from the virtual library. Elli Pinion of the VWBPE , Buffy Beale member of the Board and the Mentor team. Other members of  the board and members of the commons also talked of their missions. It was interesting to see and hear  how many non profit organizations from all over the world are involved in this virtual world and use it to educate,  do workshops, share research and learn . 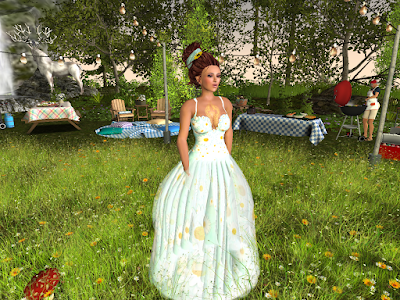 Rhainnon then  gave a short history of the commons in second life . In 2006 TechSOup began to have virtual weekly meetings led by their director of Online Community , Susan Tenby (Glitteractica Cookie). In 2007 TechSOup opened the region that was a NPC in Second Life .

In 2017  NPC became a peer-governed group which elected the first board. During those years many projects were taking place for the betterment of the world. Many coalitions were formed to effect projects as Buffy Beale spoke about . Many ideas were shared and acted upon . Common interests drew together small groups that collaborated together and still do. Many members have met outside of second life as well in their collaborations and at conventions.

Some comments from attendees expressed their feelings about the comaradarie of the Commons:

Dancers Yao: For the past 14 years NPC has been an Oasis to share dreams and friendships. No matter what has happened in real life, I know there is a special place where people are kind and care about life. Thank You.

Rhiannon Chatnoir: it was great to see the social good community come together for early things like disaster relief, Info Island's community space that hosted the NPC in it's early day, and the eventual founding of our NPC community.

Zinnia Zauber: It is about making people belong and let their superpowers shine
I am grateful that I can encourage amazing teams through shared experiences and projects.

Buffy Beale: Fourteen years of learning and networking and sparking ideas which inspired others to form real life nonprofits.: Amazing longevity for any community, never mind one where we are all pioneers in this virtual world. Cheering loudly!

It  was a wonderful gathering and many shared more feelings about the NPC as the music played and members danced and enjoyed celebrating the anniversary. 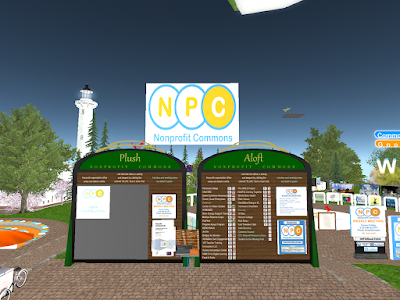 At this time the NPC and has two regions, Plush, which is donated by the Anshe Chung Studios, and Aloft sponsored by  AvaCon Inc by donations.  https://www.avacon.org . I took a walking tour of the Aloft offices where I have been before to One Billion Rising to pick up greeter tees . I walked over into Plush which has just been rebuilt . 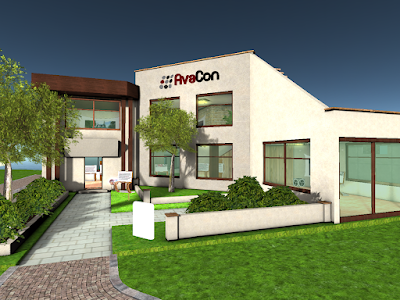 There seem to be new offices there waiting for new non profits.  The offices are very well furnished and have information about their specific purpose at their sites . To have an office there are rules about the time one must commit to the Commons, either at meetings or having office hours. Some non profits do not have an office perhaps because they have their own region, or cannot commit to hours , but they have Kiosks where you can find out about them. I saw one for Virtual Ability and Survivors of Suicide  for example.  They are still members of the group and participate in meetings and activities.  A non profit can find terms of agreement here  https://form.jotform.com/90761219372155 .

To visit and explore you might like to start  at this location  where you will find a list of all the members of the NPC listed on the board and can teleport to any of the offices on the list .

A time and place still recovering after a nuclear holocost a few decades ago doesn't sound like the setting for a romance story. But even in bleak places such as that, one can find hope for a future. Recently, Rebel Wolf, the Baron of the Deathlands, announced there had been a wedding there, officially their first. He had carried out the event himself. 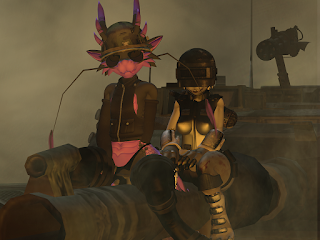 Yep, we had our first official wedding in Deathlands  at the old Cat Lick Church! Rev Wolf married Siccity  and Bynji! They actually might be really married as wolf IS a  registered minister in the Church of the Flying Spaghetti Monster in RL. Best man, ..er Wolf was Fourpaws. Feel free to send them gifts or Lindens.  Congrats guys!

Messaging Rebel about the event, his first remark was, "I do divorces too." He apologized for not getting pictures, It was in a hury, not a shotgun wedding but they are from Europe and were going to bed, so it was a quick service." Then he got back into character, "Do you, yeah I did, swap spit?  Yer now married." But he did have a picture of the couple that he took earlier. He told me given the short notice, he wasn't able to wear much of anything special, "I wore my gun of course and semi-clean combats." Sadly the only thing resembling a tie that he had was an old noose. 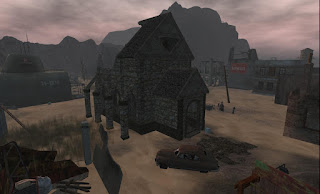 The wedding itself was in what the locals called "the old Cat Lick church. That's a pre-nuke religion they tell me." When asked if it meant Catholic, he stated what it used to be called was lost to history as people struggled to survive, "It's a old church, and we called it he Cat Lick Church, as the records are incomplete. I dunno what they do with cats, but live and let live." He checked some old notes he had written earlier, "Obliviously it's a dark chapel of some kind that didn't fare well on Nuke Day.  Today is is run by some strange old religion called Cat Licks.  I fail to see what licking cats has to do with anything. Not that we have many cats still alive." He would say that cats in the area tend to stay clear of people, as with the shortage of food many find them tasty.

Wolf did wonder if the marriage might have some real-life standing as in real-life he is a registered minister of the "Church of the Flying Spaghetti Monster." When I asked if pasta was served at the reception, Wolf responded, "There were rats at the church, do those count?"

And so that's the story of the post-apocalyptic sims's first official wedding.