The Other Dating Game 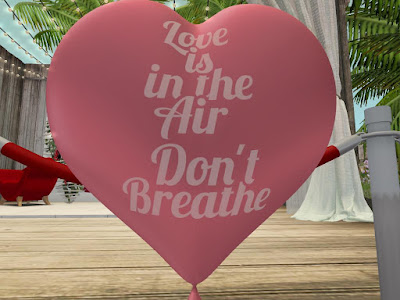 Bellisseria fairground was the site of  a really fun event last Saturday, March 7. Sponsored by the new team for the Relay for Life , Bellis Blues and DJs, and Bellisseria for RFL citizens gathered to watch and giggle at The Other Dating Game. Money was raised during the shows, of which there were two. 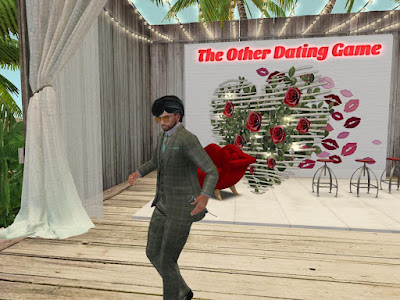 DJ FAR Dharma (fwdfwd Farslider) was the charming host of the show with assistance from the lovely fairgrounds host, Iseult Ní Urquhart (PrudenceAnton Resident) . The stage was set with a chair for the bachelor of the game and three stools for the lovely contestants vyeing to be his date. Of course he could not see them, This is not the first time the show was on and it was such a  success a repeat was requested. I was not able to make the first one, nor the first part of this two hour show but finally got to see the whole show at the second part. 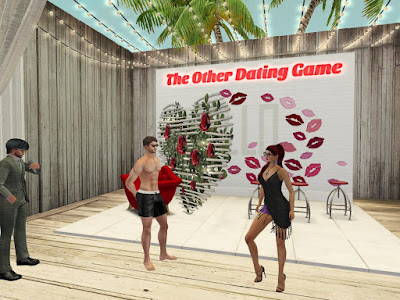 What a riot. Zildjian Clifton took his place on the red sofa and three lovelies arrived to sit on their stools and wait for the questions that would determine his choice. The audience had to get involved by providing their answers too as it progressed. Some of the comments were so distracting and funny it  is a wonder Zildjian could keep his mind on what he was doing and the poor contestants could survive with their own responses.

A sample of a question and answer.

“Zildjian Clifton: No. 2: If lindens were no object, what would you buy for yourself?”

Meli (MelisseLharithlyn Resident): A  year's worth of a full sim”

The show people tried hard to keep it more or less serious . I am sorry I did not think to collect some of the comments from  the audience but it was probably better that I didn’t.

The other contestants , Annie Panties (JadeEast Resident) and Gem Parker (Gem Oxygen)
waited patiently to face their questions and interference from the  watchers. 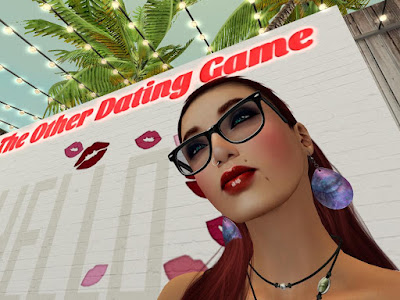 At the end Zildjian chose contestant number three, Gem Parker as his date. All those attending sent waves of applause to each of the show’s participants . I don’t know where or when the date will take place but will find out . I hope  the show will be on again it was amusing and raised some good funds for the Relay. North Crannock reported,

Gemma Cleanslate
Posted by Bixyl Shuftan at 6:00 AM No comments: 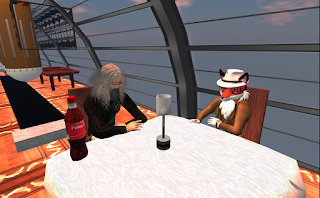 Recently I interviewed a musician whom recently returned to Second Life, Jon Bazar. He plays music in both real life and Second Life. We met at Club Cutlass, and sat down down for an interview.

To begin with Jon has been playing music most of his life, "I taught myself the guitar at age 9, (and) was in a band at age 15. ... ha ha ha ...  the others were in their 20's. We played local bars and clubs." The band would last for a few years before breaking up, "Then I have always been in a playing band ever since, even today. When asked how he found out about Second Life, Jon answered, "A friend mentioned it as a place where you can play live music to the world." As for how his first days went, "Well, not being a gamer, it was really different. But I took to it well. I loved listening to the live music and chatting people from all around the world." 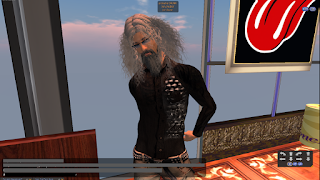 Other musicians were very helpful in helping me get set up to play myself." One musician in particular was helpful, "Avvy Barzane, a young musician from England. He has recently come back to SL also. A lot helped. But he really stuck with me until I got it, and hooked me up with my first SL shows." It was about six months until he got his first gig, "And it took a bit. But I got bigger and better shows."

When asked what music he usually played, Jon explained, "Mostly older classic rock, on an acoustic guitar. But a little bit of everything." I then asked Jon if any particular performance of his stood out. He thought for a moment, "There was a place called Guthries back in the day. Those were some pretty good shows. And I used to *dual* stream with Fireheart Braver, back in the early days of dual streaming. That was a *lot* of fun. Us being 1500 miles apart and making music was cool beans."

Of Jon's avatar, long gray hair with a beard, it's based on his real-life appearance. "That was the idea," he told me, then smiled, "I had help with that too." 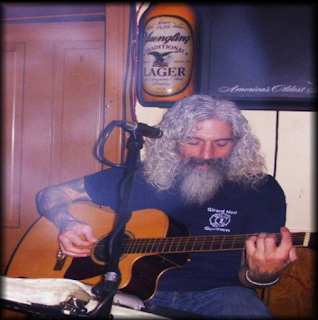 Jon would play music in Second Life for about five years, then events in real life forced him to halt his performances, "was away for about five years, and now back." Of his current band, "The band I am with now, we have been together for 18 years.So we are like family." I asked if they knew about Second Life and what he does here. Jon answered, "A bit. I tried to explain it. But I know they don't 'get it'." He smiled, "I explain that people in Germany listened to me play last night. They just kinda look. I explain. And they loose interest. Ha ha ha ha."

And what were Jon's long term plans now that he's back in Second Life? He answered he didn't really have any, "Nah. Just day to day. Kinda like real life," he smiled, "Enjoying the time I guess."

On a final note, it was the Sunweaver's community leader Rita Mariner whom suggested interview, the musician commenting, "Rita is one of my oldest SL friends. Well, I don't mean she is old. I mean I have known her a long time in Second Life, hee hee."