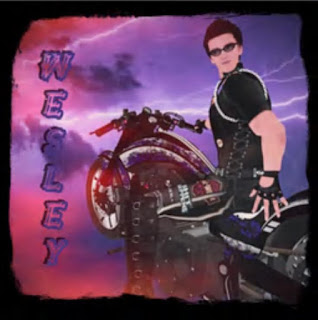 According to Wesley, there are a few steps to joining the Cobras MC.  The first step would be that the new person would become a "hangaround" which means that you join the rides for a while, and get to know the Cobras MC members a bit more.

The second step is that after "hanging around" with the Cobras MC, you are asked if you wanted to become a prospect.  If you accept, then your prospect period begins. Depending on how well you do it can take up to about a month or something like that.

The third step is that after your prospect period, they will vote for you at Church (weekly meeting at the Cobras MC).  If you get enough votes.  you are "patched in," which means you become a full member and get a vest for your avatar.

After becoming a full member, every ride you do counts to reach rides patch.  You will get them on your vest when you reach them.  Also you reach "year patches," so every year you are a member, you will get a new year patch on your vest.  Wesley had reached his five years patch recently, and also got his "1K" rides patch, that is 1000 rides.

I was wondering if Wesley is planning on staying with Cobras MC for a long time.  "Yes, of course," he answered, "I will stay a Cobras MC member for as long as possible.  That is my plan."

My next question is if Cobras MC has any fundraisers.  "No." Wesley told me, "But they sometimes participate in fundraisers and do rides and stuff for them.  after a few years I finally found an organization called EURORDIS that helps people with rare diseases and I hoped that they wanted to support me on this in Second Life, fundraising, I mean, but sadly that didn't turn out that well.  But I'm in contact with an organization called " Rare Diseases International" and I will have a video call with them in August. We will see how that goes."

As for plans, Wesley doesn't know what Cobras MC's plans are.  As for himself, "I guess keeping on riding on the tracks on Second Life," he told me with a grin.