Sunday March 6 had a few guests on Paisley Beebe’s “Tonight LIve” show. First was MenuBar Memorial, whom had an unusual kind of breedable pet to sell: a breedable pet rock! Singer Sonyajevette Charisma was on as the musician. 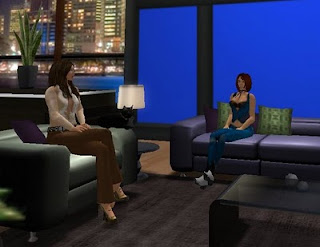 But the main guest was Azure Twine of Team GreenZone. Paisley introduced the subject as being the result of a “massive security hole,” which the product Redzone exploited, and the Greenzone HUD was created in response. Azure began by saying, “Greenzone’s a product, we’re not a militia group .... we don’t promote harassment or greeting. We were grown organically as a group of concerned citizens.”

“I was kinda drafted ... I was the one they chose to speak to you” She had been asked by the creator as her native language was English and his wasn’t, “Redzone scans you ... captures your IP address ... an invasion of your privacy.” Rezone, she explained, will ban all your alts without an appeal process. GreenZone was developed as a result. One of the team had been banned by a RedZone device, so wanted a device to tell her when she was in a Redzone area. She described Redzone some more, and the complaints of it being a community standards violation. As it worked by tracking IP addresses, it would report everyone at a Starbucks venue on Wifi.

One could keep oneself safe from Redzone by turning off both music and media streams. Azure explained she had been told Redzone used only the media stream, but it was best when traveling about to turn off both music and media, “all copybotters out there have media off by default.” Greenzone is a HuD, Azure explained, and not against the ToS. Paisley asked if Voice was vulnerable. Azure answered probably not, although she heard it could be. Greenzone has a 96 meter range

How many Redzone devices were out there? Azure stated zFire claimed 22K, which considering there were 32K sims on the Grid suggested a flawed method of counting, “the number’s much lower.” Of zFire’s claims that if Redzone was banned, another product would replace it, “there are several other systems that say they do what RedZone does, but without the one banned dying in a blaze of glory.” Azure stated Redzone had an animation that if someone banned, the avatar was set afire or caged, others “more professionally done.”

Paisley went on to say she had read some of the Redzone forums, and in a sense could understand the frustrations of some of the Redzone users, saying their argument was
“Linden Lab have allowed Second Life to get to a point of vigilantism because there are no effective ways of protecting oneself from griefing or stalking that people feel comfortable with.” Azure brought up the copybotting issue, agreeing Linden Lab did not take copybotting as seriously as most content creators want, “whom I’m one of.” While there was a process, “It requires knowing that you’ve been copybotted, which is unlikely as the Grid is so large.”

Paisley brought up the stalker potential, that products could be used to track someone on the Grid. Azure explained Redzone could do that as well. Paisley told that the person she had heard had a stalker never filed with Linden Lab as she believed it would just be a waste of time. Azure felt Linden Lab’s attitude was “until you are a victim, there hasn’t been a crime yet.”

How to tell if a Redzone on a sim was the new legal version or the old one? Azure explained there really was no way for someone else to know, “It’s up to Linden Lab to police that. ... It doesn’t actually look in the script.”

Of those Redzone users whom excused themselves, stating since Google tracked IPs, so could they, “Google won’t publicize my IP address, or keep it ... or turn it over to the police. ... there is no good way to link someone’s avatar... only Linden Labs can.”

Azure stated the privacy issue was reaching the point to places on the Grid were starting to advertise themselves as “Redzone Free.” She went on to say Linden Lab had to take this issue more seriously, “someone is going to suffer in real life, there are real life consequences to having your IP address (tracked).” Someone could potentially find himself fired, and with teens in Second Life, this added another level of problems.

Paisley wondered if this might hurt the music industry, with people turning media & music off to stay safe from Redzone and similar, “This is going to affect our entertainment in Second Life.”

Azure felt, “the Lindens need to acknowledge that there is an exploit, acknowledge that there is a hole, and that they do take it seriously and they will fix it.” The issue was not so much the IP addresses than how they were getting them. She concluded, “I sympathize with all the people who think they need to use RedZone ... but that does not justify you violating my privacy.”

As the show took place, there was something of a debate within the audience, albeit a mostly one sided one. There were a few people sympathetic to Redzone, one man in particular whom was very vocal. But most in the audience were clearly against it.

Paisley and Azure chatted for a few minutes after the show. It was felt this was “the Emerald decable all over again. Azure felt zFire’s stubbornness in trying to keep Redzone alive was him “trying to salvage a dying empire.” She did acknowledge it would probably be difficult for Linden Lab to fix the hole.

For more on the show, check the post on Paisley Beebe's Tonight Live site: Here.