The Mystery sim is usually a happy place, with it's romance theme and music events almost every day. But every year on September 11th, the staff take time to remember those who were lost that day with a  tribute event. Last year, DJ Bloodrose played a number of patriotic and moving songs. This year, a live singer was to perform: Chillee Hernandoz. 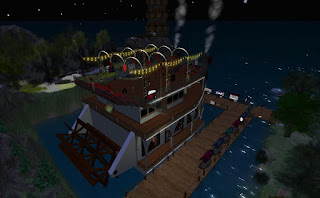 We will be holding a memorial vigil today from 12pm  on the  top deck of The Queen of Hearts riverboat , in commemoration of the events of 9/11/2001. If you would like to join us, in silence, or to share your story we welcome you. Chillee Hernandoz will sing live for us in the first part of the event followed by a time to reflect and remember.


Just before Noon, people began appearing at the ship, both staff and visitors. The crowd at first was a small one compared to the happier live music events at the riverboat club. But over time more people came. Staff provided candles to hold and special 9/11 memorial "titlers" which changed every few seconds to mention someone who fell that fateful day.

Chille sang heartfelt songs, such as "Start Crying Your Heart Out" and "You Are Not Alone." The music was not just for the audience, but also for those whom perished that day. At one point, Chillie had a message for the terrorists, saying their attack had backfired badly, "Don't you see what happened? Don't you see what you've done? You've united them like never before."

In the middle of the event, some prim cubes began appearing on deck and multiplying. A griefer had struck! Someone in the staff quickly got rid of the multiplying cubes. Then they appeared again, followed by everyone suddenly slammed to the edge of the sim. Undetered, the staff and audience made their way back to the riverboat. They were stopped briefly a distance away, then the staff finally got rid of the griever. Some of the people crashed during the incident, but logged back on and those outside the sim coming back. Chille expressed her disbelief at this act of sabotage at a memorial event, asking why would someone engage in such Philistine behavior, "If you can hear me … there must be a reason why you do that." 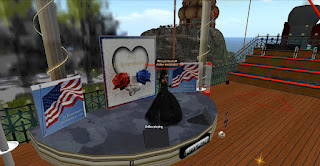 Chille continued singing. Finally wit the hour almost up, she announced to the audience she had two songs left. One was her "hardest song," named "I Believe."

Every now and then, soft as breath upon my skin
I feel you come back again and it's like
You haven?t been gone a moment from my side
Like the tears were never cried
Like the hands of time are holding you and me

And with all my heart I'm sure, we?re closer than we ever were
I don?t have to hear or see, I?ve got all the proof I need
There are more than angels watching over me
I believe, oh, I believe

Near the end of the song, Chille cried a little. After it was done came the last one, "God Bless the USA."

And I'm proud to be an American,
where at least I know I'm free.
And I wont forget the men who died,
who gave that right to me.

And I gladly stand up,
next to you and defend her still today.
‘Cause there ain't no doubt I love this land,
God bless the USA.

As Chillee was finishing up, manager Amythe announced, "After Chillee finishes we will hold a vigil here on the top deck with time to share memories and reflect on those who lost their lives. We will also take time to remember military and emergency workers who serve, have served and lost their lives in service." Chillee soon finished, humbly chatting, "Well, I know I didn't sound the greatest today, but I hope you all enjoyed it." Several people answered that they did. "Thank you so much," she answered, "It's hard to sing sad songs."

When it was time for stories, one lady visitor remarked, "I almost lost my cousin that day, he worked iside of the WTC, he was late that day. He may have actually saved a few lives, he called his office nad told his co workers to get out because the building was going to go, telling them to disobey the firefighters who told them to stay.  Me and my whole family wept, not knowing if he was alive or not because the phone lines were down. On my car, I had a custom decal on the back window that reads 'In Dedication to Fallen Officers.' I drive a retired police car and because of that day and that the motor came from a officers cruiser that died while doing his job I have it there." Later on, she would say, "I'm (crying) right now, because I'm just reliving that day in my head."

Another resident gave his account, "I was in central NJ that day. I got a phone call to turn on the TV. And when I did I was astonished to see video replays of the first plane hitting the World Trade Center. Moments later I was horrified to learn that it wasn't a replay it was live footage of the second plane hitting it. And when I went outside, I could smell and see smoke. Even though it wasn't raining and sunny, it was a thick cloud of smoke all over the sky. Just very sad and completely surreal...I was almost directly across from the World Trade Center."

"But I also remember all the people who banded together. All the firemen, police, doctors, nurses, and countless other people who it just came natural for them to lend a hand to anyone."

Amythe would give her own story, “I'm not American but I was indirectly involved with the events of 9/11. I was online playing a game when the news broke. One of the young boys who played sent me a frantic IM. I often played the game with him and his father. I knew him as ‘Hunter’ Hunter was 10 years old and he was terribly afraid.”

“His father was in the Pentagon and was not answering the phone. His mother and grandmother were panic-stricken and crying and could not talk to him. He was terrified. I sat and listened to him as he described to me what he could see on TV. Pictures of the plane strike on the Pentagon and the devastation. he told me what his family were saying - they had forgotten he was there. They could not reach his father at all and his mother was grief stricken. He felt alone and frightened and their words frightened him more. He kept saying ‘I don't know what to do . What do I do. How do I help my mother?’ "

“We talked for 3 hours while his family cried and screamed in the background as the horrors of the tragedy unfolded. His fears poured out of him as more and more about what had happened was discovered. One picture showed that the part of the Pentagon his father worked in had taken a direct hit. He was frantic though doing his best to be brave for his mother. After a few harrowing hours he said with great dignity, ‘Thank you for listening to me. You helped so much but I must go and comfort my mother now,’ and he left.”

“I sat and cried for many hours. My heart went out to the young boy who was facing now being the man of the family. Although I did not personally lose anyone on that tragic day I lived that day through the eyes of a frightened child. The word got around that I had stayed with the boy and listened. In the following days others who lost people came to me with their stories and I heard so many harrowing tales of family lost on the aircraft and in the buildings. Each story touched my heart and still does. I will never forget that day or the people I met the lives of whom it altered forever.”

Chille herself told everyone, "I too am not American, but I will never forget that day, I was at work in a meeting with the doctors. and like you we saw the live footage of the second plane. The whole room was dead silent. We were all in so much shock and then the crying started. I remember how it was and how we held each other and cried the tears for those who lost their lives. But one thing stood out more than anything. It was a world watching this tragedy, a whole world coming together in grief."

Eventually, everyone began going their seperate ways. Some would head on to other 9/11 events or the Sept 11 memorials. As in real life, it was a day to reflect.