Shockwave and the Sunweaver Movie Night

For a couple of years Shockwave Yareach has been treating the Sunweavers and any guests on their land to a movie night here in the land of Second Life. "Movies in SL? Never!" Well, actually it’s true. Shockwave every Sunday night at 6pm SL time, 9pm east coast time of the US, has picked a movie to show the Sunweavers. The Sunweavers being the furry group headed by Rita Mariner. I joined her group long ago and I never had a reason to drop them. 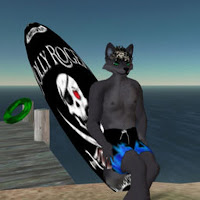 Long ago when I first learned about Shock’s movie night, the first movie I saw was the "Star Wars Christmas Special." I remembered a friend’s warning in real life to never watch it. Be warned though this movie is completely wretched I was only able to watch it with friends to make fun of it.  It also came complete with retro commercials. In Shock’s words it’s a neat time capsule, "Oh it's epically bad.  But it's so bad it's funny and with all the commercials, it is a great time capsule."
But don’t lose heart. Shockwave plays excellent movies as well as bad from new to old school. One time I mentioned I never saw the old animated movie “The Last Unicorn.” My friend Tantari Kim said it was a good movie that was a little scary for kids. Shockwave was nice enough to play that movie for me. I was surprised as it was like a bottle of old wine that aged well and was a joy to watch. 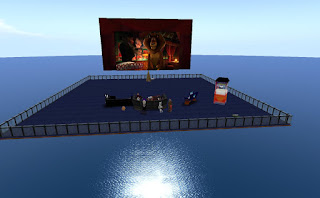 A couple other movies that come to mind was "UHF," the classic movie with Weird AL the oddball songwriter which makes parodies of popular songs. "Summer Wars" was an excellent Japanese animated film. It explored a near future where everyone had an avatar to explore the Internet, with someone’s avatar wrecking it. The animation was wonderful with amazing action. Shock also played “The Avengers” which just came out on DVD. I saw that in the theater recently and enjoyed watching it a second time.
Shockwave said the movie night for the Sunweavers was started by Jaxx Tardis. Sadly Jaxx was laid off in real life, so Shockwave took over. The pair still work together on the file conversions for every movie. I wished Jaxx good luck on finding a new job. 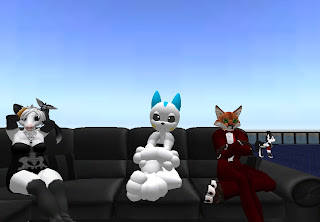 In addition to being the movie man for the Sunweavers or as Shockwave says “The Sunnies,” Shockwave also composes music parodies. Nydia Tungsen told me that he also wrote a funny song. Everyone might have heard the song “Grandma Got Run Over by a Reindeer.” Shock wrote a parody of it one Christmas season. All I can say was Grandma was drunk and regretted doing something with a reindeer.
Shockwave has played lots of movies almost every week for his fellow Sunnies. If you would like to check out a movie night ask Rita Mariner for an invite to her group the Sunweavers. Shockwave has started a trend as the Disney cartoon movie "Robin Hood” was played at the furry club Anthroxtacy. Shockwave also takes requests. I mentioned not seeing "The Last Unicorn" and he put it as the movie the following week. He generally plays sci-fi movies, animated movies, and anything that goes with the season. Shockwave announces in the group chat what movie is showing and he’s a friendly guy to boot.
Grease Coakes

Editor's Note: Middle picture from the showing of "Madagascar 3."
Posted by Bixyl Shuftan at 6:00 AM