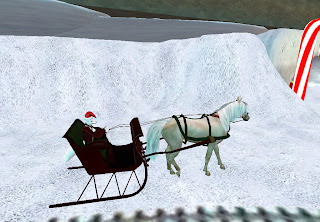 The Racer Islands I reported on last month had a great dinner party in formal attire to celebrate the Christmas season and the champs for their fall racing season. Following the instructions from the notice I found an ice rink around the large oval track. What was neat instead of just walking there I found a horse an open sleigh like the Christmas song “in a one horse open sleigh”. After a few minutes the scripted horse took me to an indoor ice rink with a few tables inside. Like the Bay City Christmas tree lighting you could skate around on the ice rink with ice skates with skating ao/s. However to skate I had to turn my male AO off. 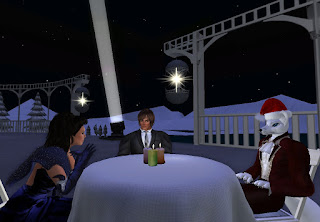 What’s great about Racers Island is the community itself. Walking to the party I was greeted right away by regulars like Nella and Doll. Eddie Mathieson himself the owner of the sim complimented me on the previous article I wrote about his sim. After some social chat over voice chat and emoteage from Doll Kabuki using emotes to say yes or lol as the official RI Mascot. Doll Kabuki also helps with the coding and scripting of the cars. After wards we sat down at the circle tables as Eddie walked onto stage and announced the winners of both the drift car and stock car races. As he announced each winner everyone emoted "applause" or "hoo!" like emotes. I sat at a table with David Wetherby and his lady friend Shelly who seemed to love the ears on my fox avatar. When I told her that I was putting this in the article she responded, “ohhhh, but I do.”
David Wetherby who was rookie of the year came in first place for the 2012 fall stock series followed by Doll Kabuki in second. Upshaw24 Resident and Jahbith Laville were both rookies for stock cars. One of the rookies of the year was Zeustorm for the Drift car series. He came in sixth place. He spoke French softly over voice chat. Biggs Braham won first place for the drift car fall series while Eddie Mathieson came in second. Another award went to Nella Boccara as manager of the year. 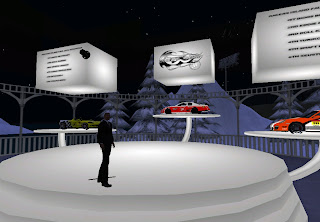 David said jokingly that he used Vaseline to make his car go faster to bounce against the walls like a pinball. However the truth was that he practiced 100 or so laps a day to get the twists and turns down packed. After the awards Eddie revealed new cars for the upcoming winter season scripted by Yuriko Nishi. The new season to play with the new cars is Jan 6th at 5:30 SL time for stock cars. The winter season for Drift cars starts Jan 10th also at 5:30pm. The new textures were prepared by Doll Kabuki and Scottie Easterman who do custom cars textures for the racers.
After Eddie announced all the awards and places of the fall season Dj Tazz started djing rock for the party. Just like real life, the party was filled with people talking over voice chat. People were arguing which was better Celsius or Fahrenheit and other silliness and random talk.
All in all Racers Island is a fun to hang out at. With a new season forthcoming and new cars it seems like an exciting time to visit and be around the sim. Even if you don’t want to participate in the races there’s still tracks to cruise around in with a freebie vehicle or your very own bike or car that you bought yourself. There’s also the demolition derby held every Saturday night at 6pm SL time if you’d rather smash and bash. Not only is Racers Island a great place to drive around in, the people around and involved in the sim are fun to hang around. Drive on by and check out the new season.
Grease Coakes
Posted by Bixyl Shuftan at 6:00 AM