My first awareness of Ub Yifu came during the 2009 Burning Life. We were still calling it Burning Life, and not Burn back then, and I still recall the sense of wonder I experienced upon encountering Ub’s Gulliver installation. “How did he do that?” was the question everyone asked upon seeing his larger than life Gulliver, tied to the playa. 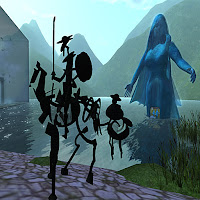 I was thrilled and surprised to find that Ub Yifu was doing a designer build right next to my team’s camp. For those who don’t know: Every year for Relay for Life most teams build a campsite, but some residents are invited to do a build on the annual theme (this year: 100 Years of Hope), and these are called Designer Sims.  As soon as I realized that Ub was our neighbor, I ran over and asked him for an interview. He could not have been more pleasant.

By the way, if you run into Ub Yifu, you will never forget him. Bryn Oh, well-known Second Life™ artist, described his avatar as her favorite. He is a recreation of the famous Picasso Don Quixote and Sancho Panza drawing, complete with both characters! He is a original and creative fellow, and I was happy he agreed to talk with us:

SL Newser: How did you find out about Second Life™? What has kept you here?

Ub Yifu: I first heard about Second Life™ in 2007 on French TV. They were saying that anybody could build anything in 3-D there, so I wanted to try[smiles]. And… guess what? It was true! So, I got addicted to building things and haven’t stopped for six years now—starting from the basic prim to mesh now. 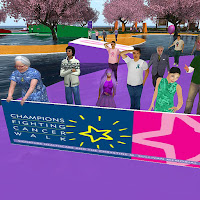 SL Newser: How did you come to make statues in Second Life?

Ub Yifu: I came here to create things, but since I was painting as a hobby in Real Life I started earning a few Lindens importing my Real Life painting into SL. Then, I decided to make the 2-D paintings in 3-D, and I started reproducing famous painting from Matiss , Picasso, Magritte, and DEGAS in 3-D. That lead me to reproduce real life sculptures

SL Newser: Tell me about your workflow. How do you go from an idea to a three dimensional Second Life™ object ? What tools do you use?

Ub Yifu: I usually start from pictures and use several 3-D software programs to do the shapes I want. Now meshes are changing the game, and open many windows to 3-D creation.

SL Newser: How did you arrive at your concept for the build you have made for Relay for Life? 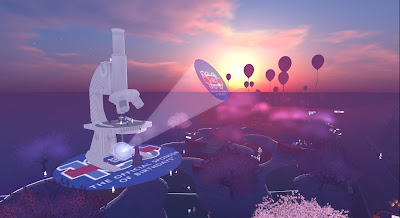 Ub Yifu: Well, I had some help! Ipunin Pera is very aware about the cancer fight with her own charity and she gave me a lot of good advice. The theme is 100 years of the fight against cancer, and I  in the present time sims,  so I tried to symbolize the research from all over the world with a giant microscope studying earth looking like an atom. Around this, the researchers are working hard and helping people. On the ground the people from all over the world gather to do the fight! (Note: You have to come and stand with Ub Yifu’s statues, and experience the feeling of being part of the fight against cancer.)

SL Newser: What would you like the rest of the world to know about Second Life™?

Ub Yifu: It’s really a place where you can make your dreams come true, especially for people who like to be creative.

SL Newser:  What other plans do you have for the future?

Ub Yifu: I’m working on new mesh statues all the time now, and the new thing on my sim is the exhibition of a new Flickr artist doing Second Life™ pictures every month. I found a great community of creative people there and I’m glad to share some space with them. During July 2013 come see Bamboo Barne’s pictures.

I could not agree with Ub any more. I went to the sim where he has his gallery, and ended up exploring and playing in his Gallery for over an hour.

Ub Yifu’s Relay for Life build is a colorful series of paths that lead to a giant research microscope. There are also rides to play on, and multitudes of settings for taking of pictures. As the sign in the playground  there reads: Imagine a world without cancer.

Where to find Ub Yifu’s work: 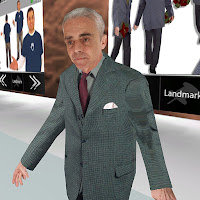 Ub Yifu also does custom work, and can recreate your avatar as a three dimensional sculpture.