SamanthaS Nightfire was a writer for the Newser in 2010. In early 2011, she hosted the Virtual Tonight show. More recently, she's gotten into a different field: wrestling. She is taking part in the start of a new wrestling group in Second Life, and recently invited me over to discuss the details. 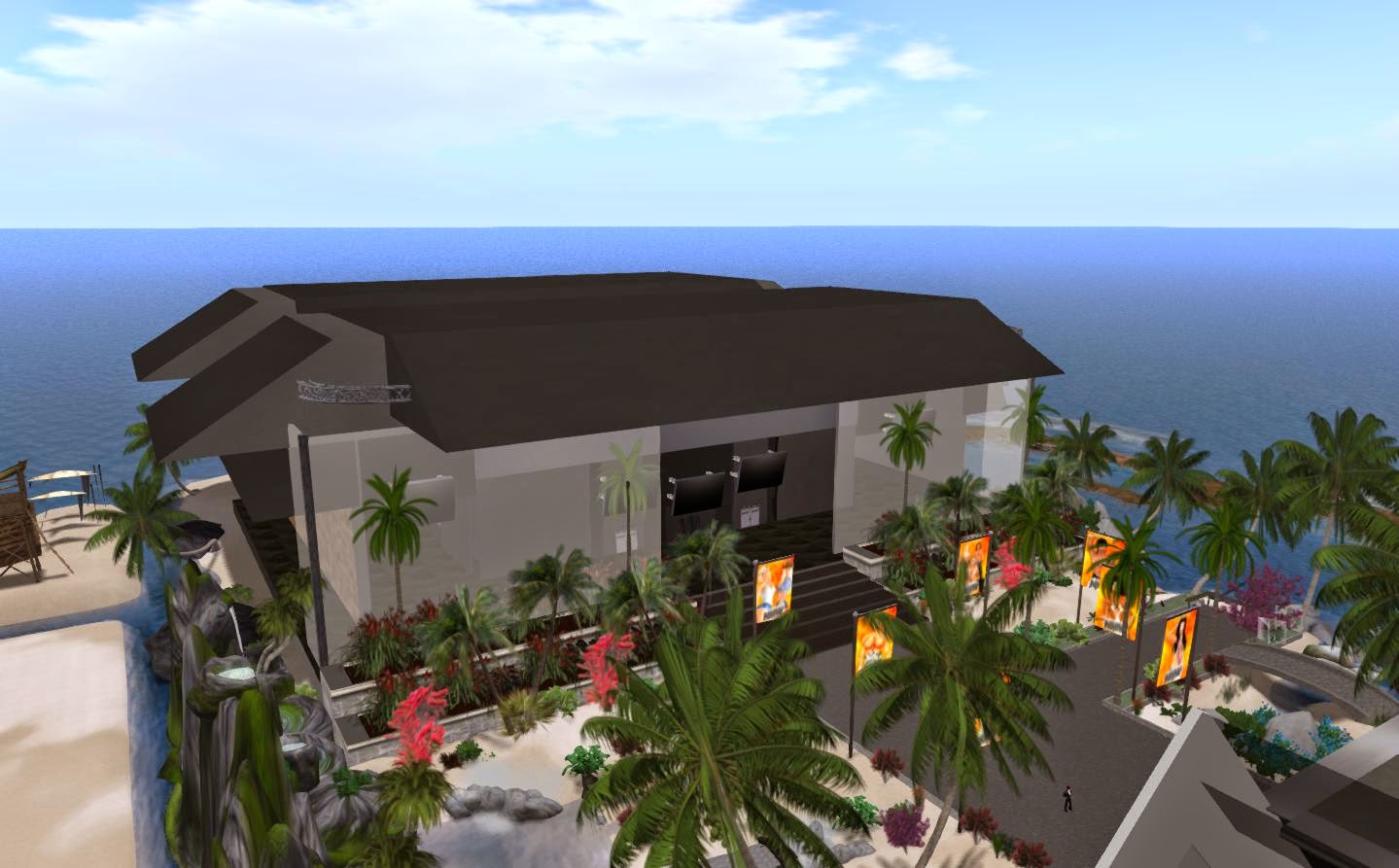 Wrestling isn't new to Samantha, at least as a fan. A few years ago, she invited me over to see a match between a couple women wrestlers. In a recent conversation when I asked how she'd been doing, she offered to show me, and send a teleport request for me to head to Unforgiven Island. "Good to see you," she told me. The land itself was sand with palm trees, with a large building in front of us, "I terraformed this sim, it's a partnership of a few freinds." She then told me,"Recall my show Virtual Tonight? Well, at one of my show interviews, I became good friends with Salvatore over there," she pointed to a man, Sam Luciano (Salvatorelucania) whom was resting from being Away From Keyboard at the moment, "from that show on we hit it off. He was one of the producers of another show." And his show was about wrestling, UWS Wrestling, which was produced by the same network that did hers, Virtual World Network, "He invited me then to join them as a promoter and their marketer." And so she did, and things went well. 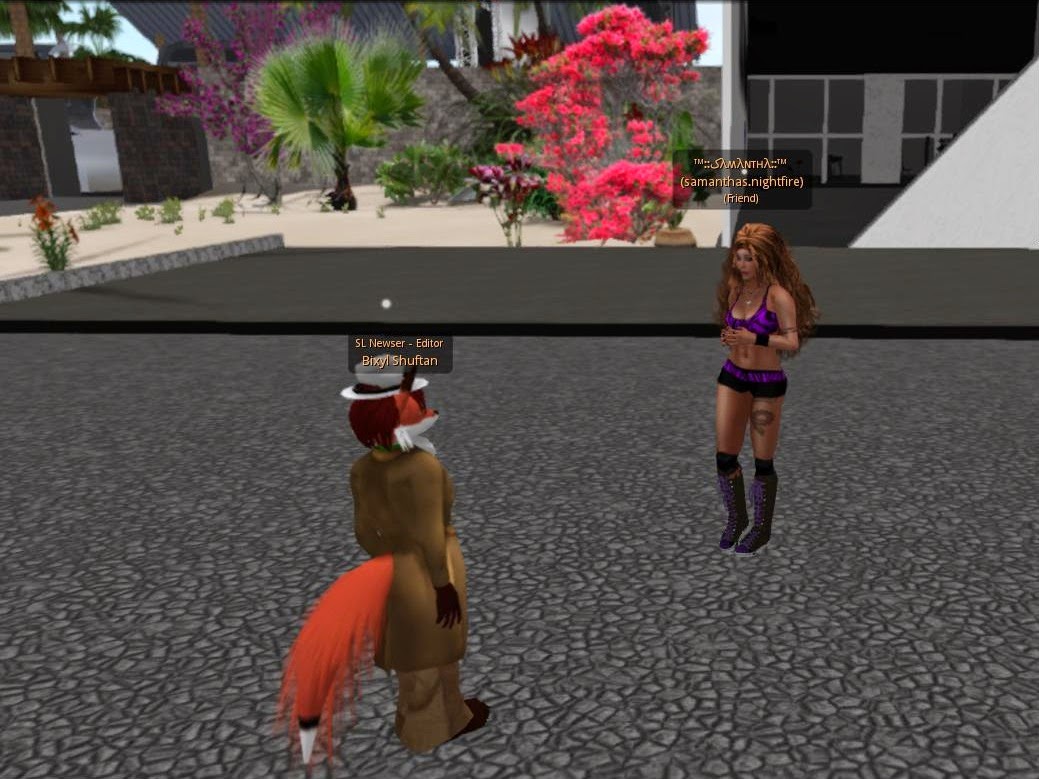 "Anyways, we've come a long way together and the end result is many partnerships with him. currently, I am in training to become a wrestler for (a) new wrestling federation called New Millennium Wrestling (NMW). ... We are so new that we haven't had a show yet." She wasn't just going to promote the show, but also be one of the participants, "wrestling is very exciting."

She then showed me around a little. At the entrance to the building was a kiosk with applications for new wrestlers. One could enter straight into the main building where the wrestling ring and the seating around it was, or take a teleport door to the upper seating looking over the ring.

It was about then that Sam Luciano joined us. Talking to us in voice, he had come up with the idea for New Millennium between two and three years ago. As of now, one show a week is being planned, most likely for Fridays from 4 to 6PM SL time. Whom else was on the team? David Hawk Actor was the organization's president and de-facto owner while Sam himself was the general manager. There were not many others on the team, "I believe in having a small staff ... I'd rather go through one or two guys than ten or eleven." 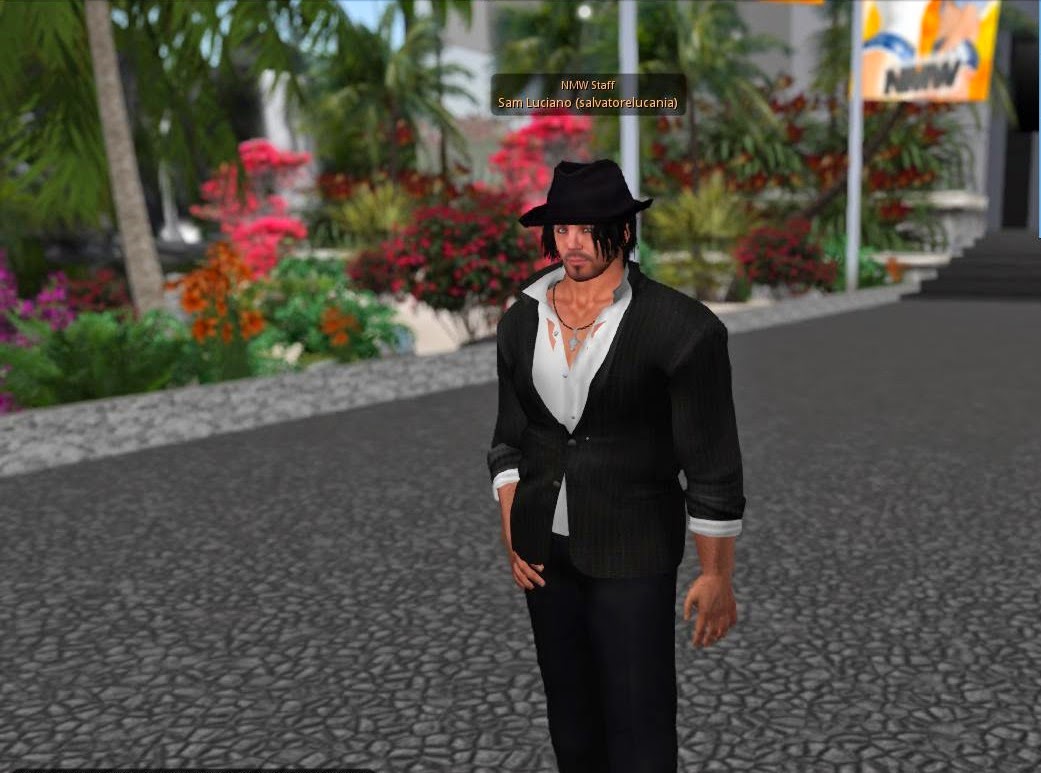 "We are inviting the general public to become wrestlers," They told me. What were they looking for in applicants? Sammantha answered, "trainable, willing and able, no drama except for while in a match. ... They must also be willing to be directed, as we have goals of filming." How long did it take to train an applicant? Sam answered it depended on the trainee's experience, "they can pretty much learn in two or three weeks, if they practice a few days a week. It's been done in about a week." The ratio of male and female applicants was somewhat close to even, a couple more men than women. Did female wrestlers tend to be more vicious than the males? Sam answered, "It depends how you look at it, ... different styles. Some in the past have had some especially vicious matches, others just wrestle." Of the applicants, Samantha was the only one who came in without any prior experience.

They mentioned the wrestlers in the group performed through the use of a HUD. There was another group that did so through use of poseballs, but they didn't consider them professional. During our conversation, I asked half-seriously if anything like real-life pro wrestler "Jake the Snake's" boa constrictor could be made. Samantha told me it actually wouldn't be too hard to make, "Props are easy to get. Many wrestlers are also (content) creators, animations, moves and props as well as rings, arenas etc. Almost anything can be made." Phara Akula and Stuart Warf stood out as builders of wrestling content. "Then there (are) the championship belts," Samantha told me, "those are beautiful, they are so intricate ... Derek Zane is the creator." 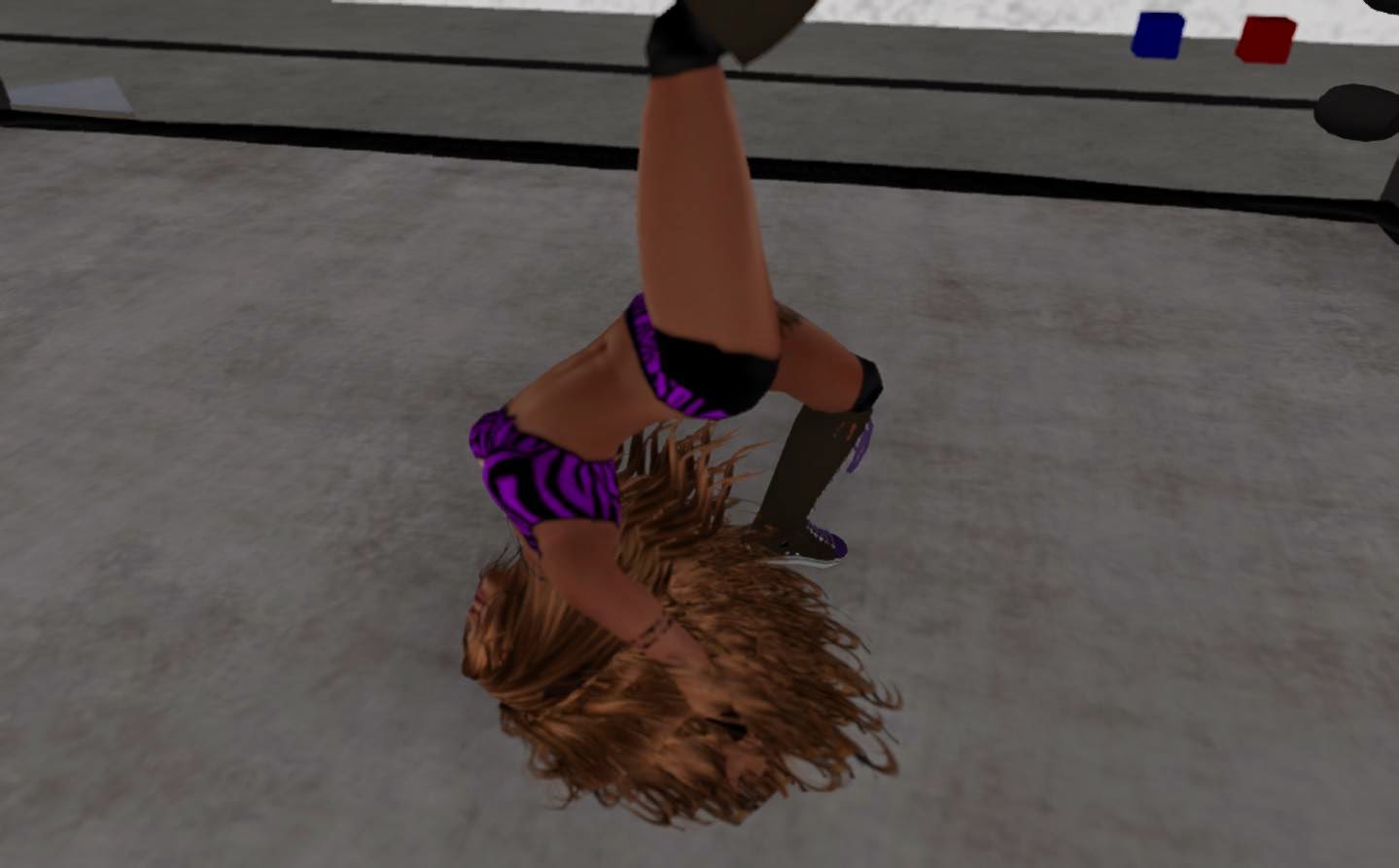 Samantha showed me the training center, which had four separate rings. There was also some exercise equipment. Getting in one of the rings, Samantha demonstrated a few moves. Besides the animations, there were gestures, "we have to make fans believe in the pain, when we get hit, we have to make it believable." Despite her skill, she did glitch at one point, "I have a lot to learn...mostly what moves make sense for what. And there are many. Also martial arts moves are included it if fits with a character, even gymnastics. ... Having confidence is most important with the moves. I wish I was good but so not ready yet."

"My character will be what i am familiar with, my Hawaiian heritage, also my martial arts," Samantha told me, "I will use Hawaiiana with my character." I asked about martial arts and Hawaii. She told me, "Well, it's really popular here. Krav Maga is also catching on fast." She told me this martial art is a bit more practical and less art than most popular styles, "very vicious."

Besides her wrestling gig, Samantha was writing a book in real life, "fiction, I got the idea in a dream."

It was soon time for Samantha and I to part, and we went our separate ways.

Stay tuned for announcements about New Millennium's Grand Opening and it's first event. No doubt Samantha will be continuing to have an impact in Second Life, and not just on opposing wrestlers in the ring.