The majority of Second Life residents look back upon their Rezzday to celebrate their virtual experiences. Myself, I tend to look back on what might be called the start of my career here as a journalist.

When I first logged on in Dec 2006, it was just after I'd gotten high speed Internet and Second Life was one of two places my online friends had been urging me to check out, the other being "World of Warcraft." But when the girl who talked me into coming here was distracted by new responsibilities, I ended up spending more time with my other friends whom were free to show me around Azeroth. So my experiences here were few and spotty until Summer 2007 when it was suggested I check out the builds in the Relay, and my interests were kindled once again. I came across Luskwood, began finding other friends here, ditching the starter ringtail for a Luskwood Red Fox avatar, and starting to explore. 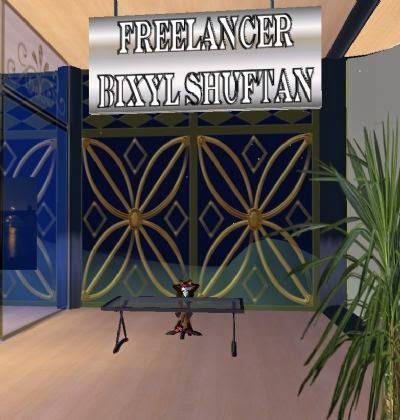 Curious to know more, I began looking for blogs and newsletters about Second Life. Among the more interesting ones was "Second Life Newspaper," owned by JamesT Juno and edited by Dana Vanmoer. While perhaps not as flashy as some of the more tabloidish webpages about the Grid, I found it more informative about what one could see and do in Second Life. After some time reading it, there was an announcement for reader submissions, either articles or interesting pictures. so I sent in a few, thinking at least it would get my name noticed. It did as James and Dana soon asked me over for a job interview!

And so ended what I considered my beginning period in Second Life, and the start of my virtual career here as a journalist of the Grid. With my first payment, I got a fedora hat and overcoat for a classic reporter's outfit. That also gave me the nickname "Fox News," which got chuckles from both fans and critics alike of the real life news network. I would go searching across the Grid for news. But would also occasionally report on interesting goings-on among my friends and hangouts, my first of the latter being the STA sim (Student Travel Association). 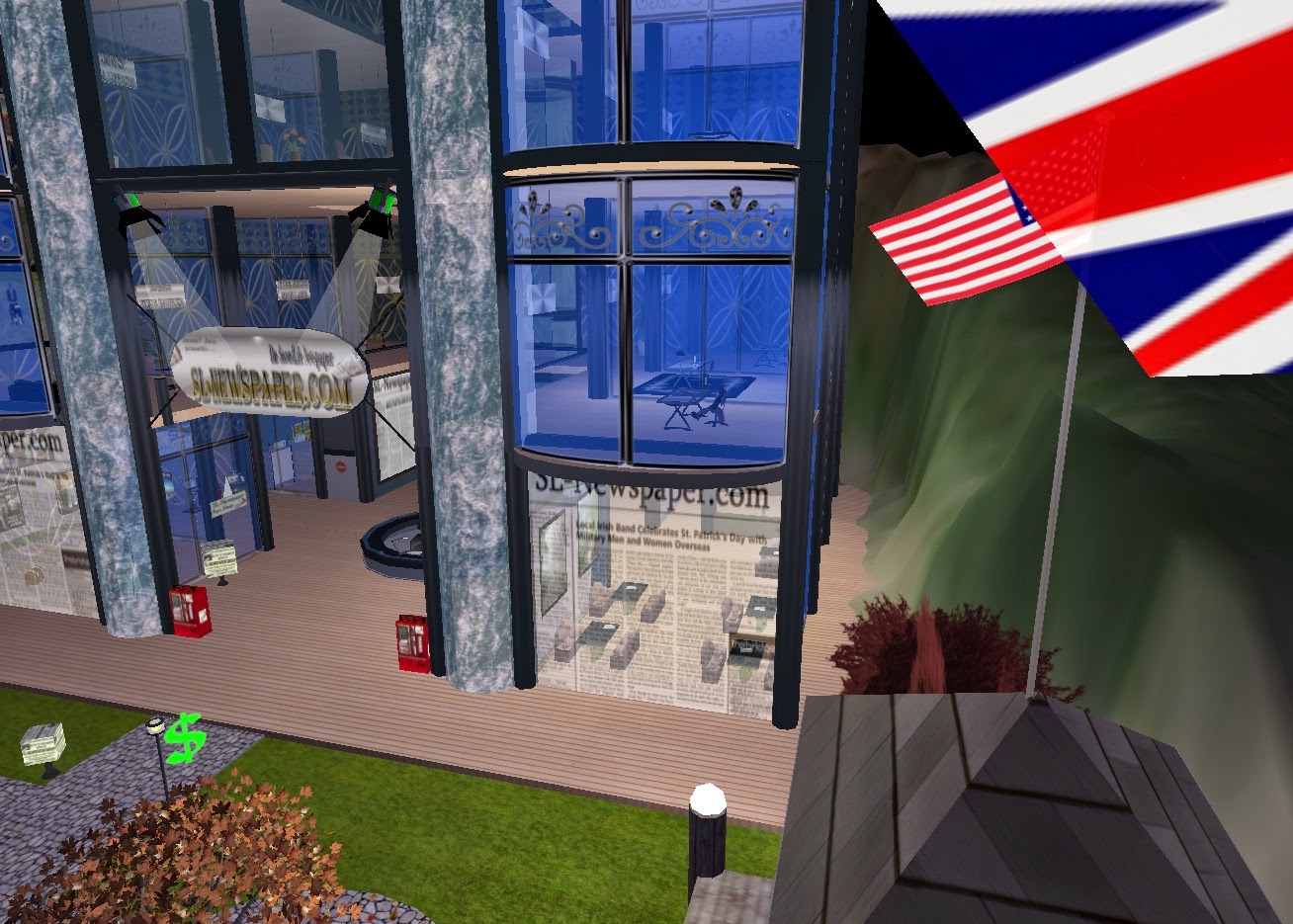 I wrote about all kinds of things about Second Life, it's People, Places, and events, from popular places and it's noted personalities, to out of the way places and residents whom had made something great and had yet to recieve recognition. I would write about various holidays, and a community or place deciding to celebrate an event or milestone. There was always something to write about. And of course there were the cartoons. I had a knack for finding humor in all kinds of scenes. I was part of an accomplished team of writers that covered the Grid. And eventually, my efforts were recognized by being made "Office Manager," which meant updating the paper when Dana couldn't.

Sadly my first hangout after Luskwood, the STA, would soon fold. And over the next few months many of my first group of friends would loose heart and drop off the Grid as well. Over time, I would be invited to be a part of other places, the Fortunas Club and Fortunas Estates, Woodlin and the Star Tails Club, Foxworth and the Blue Parrot Club. Sadly these would all eventually fade, with nothing left behind but memories and whatever screenshots I took. It wasn't until I became a part of the Sunweavers and Angels that finally something outside the paper I joined up with endured.

But by this time, Second Life Newspaper was in trouble. Real-life events with both James and Dana were demanding their time, and eventually they would no longer be able to run the newsletter. In Spring 2010, the staff was told ahead of time the paper would be shutting down in June. We were shocked. For many of us, the paper had been a part of our SL experience to the point we couldn't imagine it without. But what could be done? What could be done was for me to step forward, and start a new paper for the team. 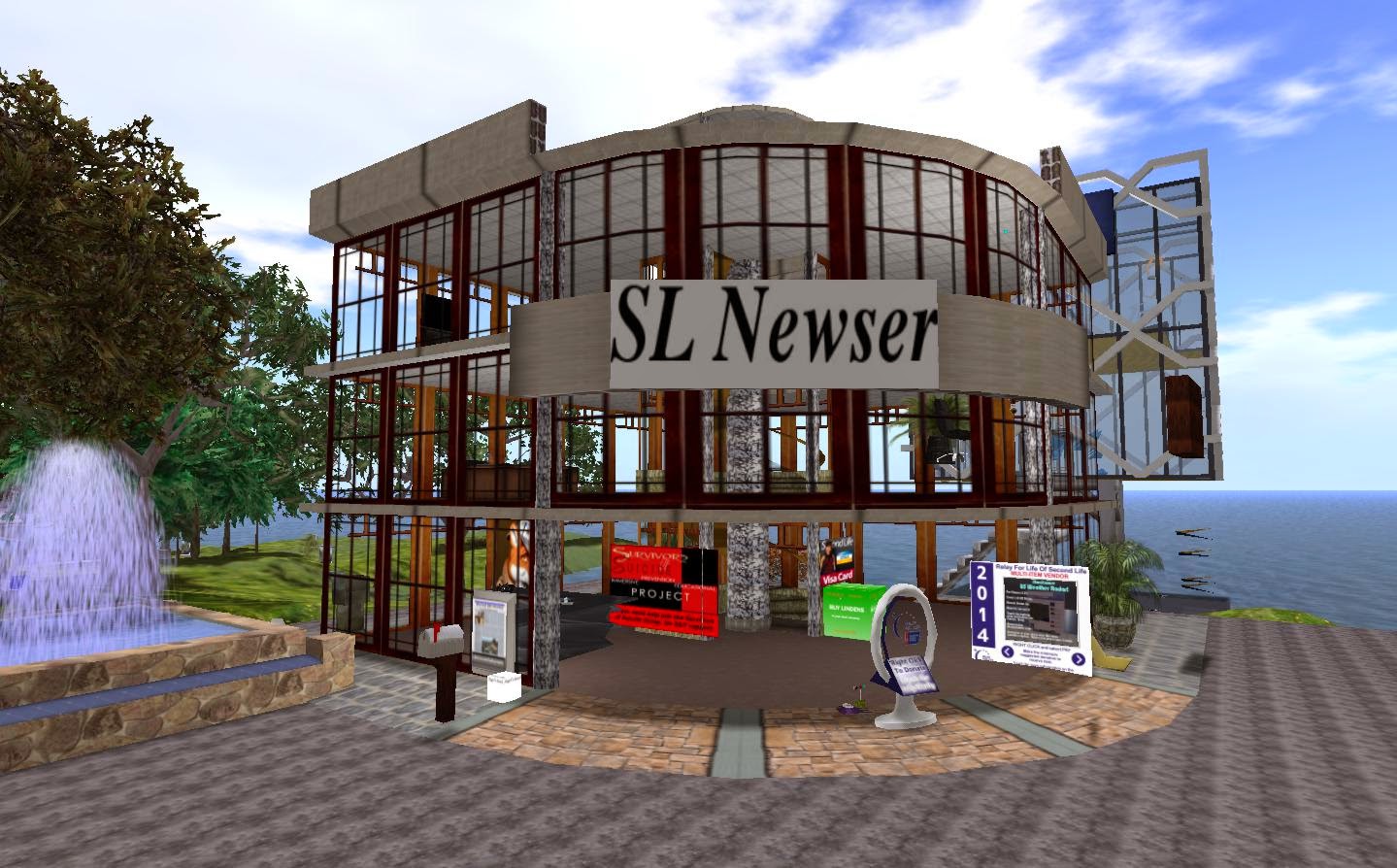 And so my role changed from being just one of the reporters to the Editor, and Second Life Newser was born with most of the remaining SLN team under it. The Sunweavers/Angels right away offered a place for us, and we soon had an inworld location: the SL Newser Office building. Once again, we were covering the People, Places, and Events across Second Life, but with one whom they once knew as a coworker now calling the shots. I would run the paper with my experience under James and Dana as a guide, notably the paper's style. Probably the biggest difference would be no separate "Adult" section. Such articles could be edited to the point they were workplace safe.

Second Life has changed much in the time I've been around. I came in about the time it was the most popular and it was mentioned in the mainstream media. Within a few years though, it was no longer new, and the public's attention had moved on to things it could easier understand such as "Facebook." Many areas have come and gone. The media has changed as well. Treet.tv used to do live programing across the Grid on SL TV sets. Today, live programing is a rarity, reserved for a few events such as the Relay for Life. Shows like "Tonight Live" and "The 1st Question" that went on for years have also folded as they people there felt it was time to "move on." 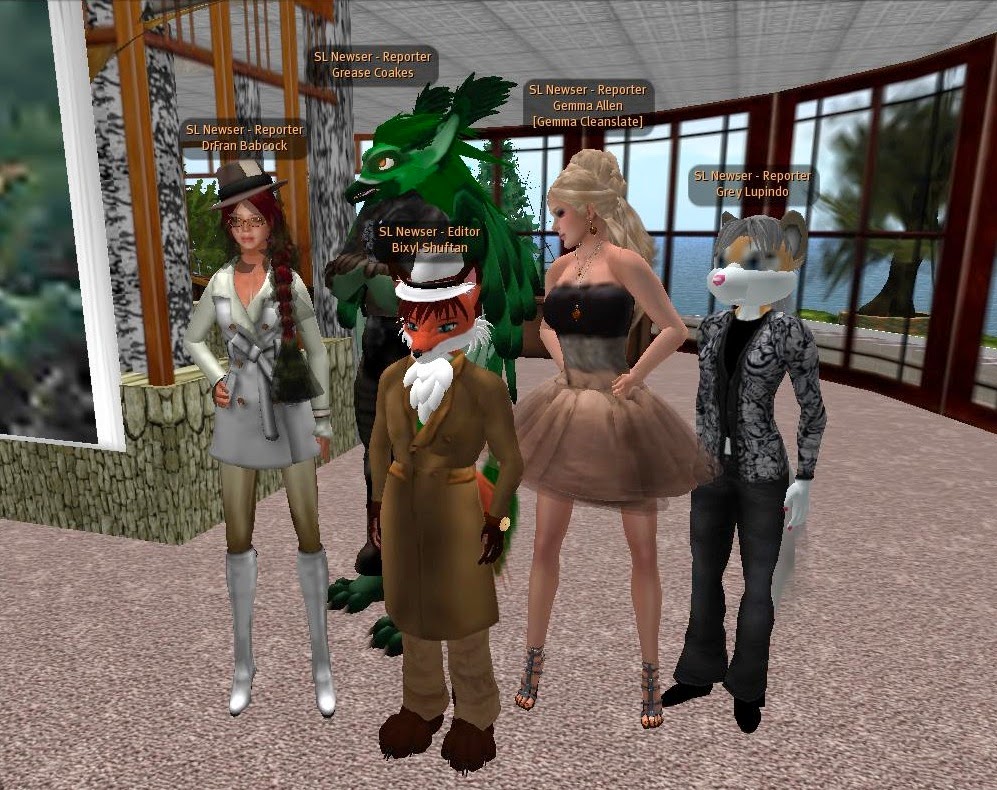 But while some things have been lost over time, there have also been gains. New people have come to the Grid, and have made their own contributions. New places and new builds have sprung up, giving existing residents new places to see and explore. There's always something new, one just needs to know where to look.

Then there's "The Lab." When I came on, some of the staff interacted more or less freely with the residents. But over time this changed as Linden Lab became more distant, and seemed to drift from the residents. It didn't help that they invested in projects that just didn't work over time, such as sims separate from the Grid aimed at businessmen to hold virtual meetings when they could just get a couple video cameras for a teleconference. Over time, longtime residents have had a love/hate relationship with the Lab, groaning at it's blunders and policies that made no sense except to the more conspiracy minded, but praising it for fixing the bugs such as the infamous "all attachments up the butt" glitch from when I was new. Since it's current CEO took charge several months ago, things seem to be going better, though old-time residents don't easily forget past mistakes.

For me personally, there also have been losses and gains. Old friends have faded off the Grid when some event in real life demands their full attention or cuts off their ability to come here. This includes the Newser staff, of which we've had to say goodbye to some talented hands. But new ones have come in to bring in their talents. My adopted home of the Sunweaver/Angels has seen some changes, sims coming then going as residents moved in then left due to real life. Clubs have come and gone, some more than once. When Nydia Tungsten was handed the longtime running Club Zero Gravity, she kept it going for four years until finances forced it to close. But Perri Prinz still had her classic rock club, now called "The Vinyl," which the locals have kept going even when it's owner couldn't show up for a few days. 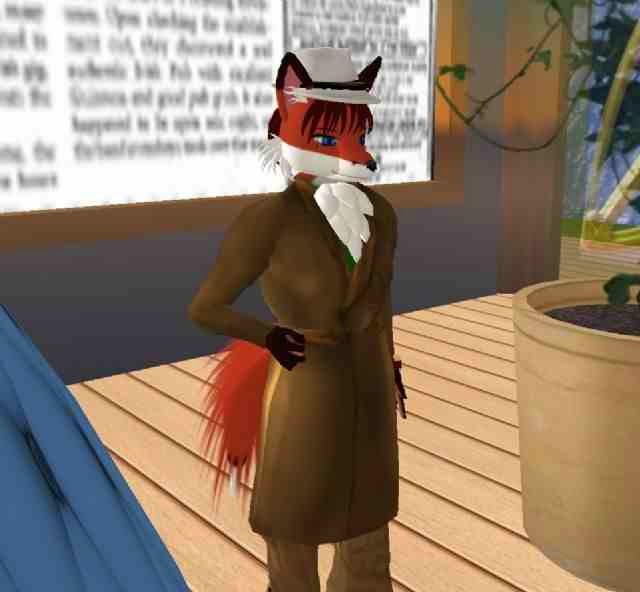 So what's ahead? For Second Life the big question is the upcoming virtual world by Linden Lab, which so far they have yet to name. What will it be like and will longtime residents still be able to enjoy the Grid we've known for so long? The Lab promises "We'll make it so good, you'll want to leave your stuff behind and go there." Longtime residents, with memories of past Linden blunders, are skeptical. While some wonder if the Lab will "turn out the lights" in Second Life to force the residents here, that's unlikely as the Lab would be making a gamble it could easily lose. Others see a tightly controlled place with lots of flashy graphics but limited options for creative building. It may be that the new Grid becomes the place for new residents and those who want a safe predictable world, while Second Life becomes the place for the experienced and creative, the virtual world to go to once those from the new one go through their "newbie phase."

Personally, seven years is a long time. Long enough to see a friend's baby grow to a child in public school. Long enough to see one US President spend the twilight of his term, transition to another, and see him entering the twilight of his years in office. I became a virtual journalist having just recently turned 40, with college and my early adulthood years still fresh in my mind. Now, I'm being reminded by real life friends 50 isn't far away, on my way to becoming an old man.

The kid who grew up playing Atari video games now spends time in middle age behind a computer screen writing stories about places he once could only imagine.