At my home, on Sunweaver Bay, I often have house guests and teach them to build things and become good members of the community. Two of these guests were involved in Second Life wrestling. Back in high school, I was very good in that sport, but don't have much interest now. In thinking of new adventure to experience and write about, I thought wrestling might be interesting, so looked for places to see it. There are many listed, but the one that caught my eye was FWF, the Furry Wrestling Federation.

I TPed to the sim to have a look around. The first thing I see there is a sign, announcing that matches are held every Friday, at 1pm SLT. I scheduled myself to go see it, in action, the very next Friday. The night before, I went to the sim, to see if I could figure out how they worked things at the arena.  While nosing about, back stage, I noticed an av was approaching, on my radar, so I went to introduce myself and see if he knew anything about FWF. It turns out, his name is Tim Vanes and he is the usual announcer, at the wrestling matches. Learning that I was a Newser Reporter, he was happy to explain it and answer any of my questions. 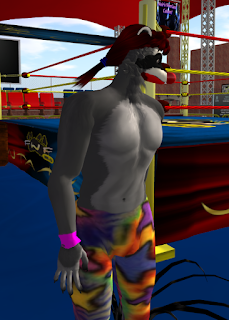 Tim explained, FWF has been around about three years. The owner and one of the wrestling stars is Rocco Racclown. He also pointed out that the wrestlers each developed as characters, good guys and bad guys, like in TV professional wrestling. The westling moves are done by each having a HUD which has all the animations required. Wrestlers go through a training period, to learn to co-ordinate moves and develop their own characters. Naturally, for any given match, the combatants must work with a script, to make coordinated animations, but I promised Tim I would not reveal if the winner was known in advance.

In addition to furry wrestling, they were also connected to GCW, Global Championship West, which features European style human wrestlers, from different countries. The head of GCW is Josh Poffo-Yoshie55 and we'll get back to him in a bit. GCW will begin a regular schedule of Wednesdays at 3pm SLT, beginning November 25th. Both GCW and FWF are always hiring and looking for both men and women wrestlers. They both want more sponsors to get on board.


You can watch FWF matches at the arena and they also can be seen on SL TV. They also do roadshows at other sims. Matches are typically one to one and a half hours and have 3 matches, sometimes as many as 5, with the last match being for the title. I asked Tim if there was special seating for the press and he indicated a place near the TV camera. I thanked him for all his help and promised to see him at the next match. 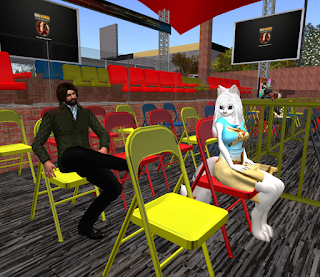 On Friday, I took my seat, before the show began and looked around to see how many were in the audience. There were only a handfull, so I knew there wouldn't be any lag to deal with. To my delight, I noticed the tag, on the guy sitting behind me, was non other than Josh Poffo, the head of GCW. Learning that I was preparing an article about wrestling, for the Newser and that GCW would also be mentioned, he was happy to answer my questions, between matches.


One of the things I questioned is, if one wanted to hire on, what expense was involved, regarding clothing and HUDs. The cost is very low and for employees, practically nil. Naturally, the next question was, "Do they get paid for each match and how much". turns out, unless they get into "lucky" positions, they aren't paid, though some promoters do pay one or two hundred in "kick-backs". Probably based on how many sponsors the venue has. Josh said, they are not in it for the money, it's a love of being in the show.

At 1pm, the show begins with fireworks on stage and video playing on big screen TVs, around the arena (make sure you have Media and Voice turned on). A man, wearing a referee shirt, gets up from the announcers table and enters the ring, Using Voice, he tells us that the regular announcer was called away on business in real life, so he would be today's announcer and Ref.

The first match was Vidiot vs/ Alleycat. To my surprise, Alleycat was played by Brad, who had been my house guest and he was wearing the trunks that I had custom made for his character. My very first match and I already had somebody to cheer for. The arena gives free gesture collections, so I was able to cheer, when Alleycat won. 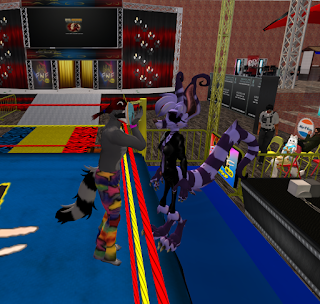 The second match was Cam vs/ Fritz. Since I didn't know either of them, my attention turned to their technique. Because they each use a HUD and those are not synchronized and the players are likely a great distance apart in real life, the action had some uncomfortable pauses. Understanding this, the show was still very entertaining.

Last, we have the title match, Rocco Racclown vs/ Crowley the Bat. This is better coordinated, but I notice the Ref stops announcing and his tag says he's AFK. While the Ref is out of action, Rocco leaves Crowley laying on the floor and walks to the ropes. A mangy looking character, called Sandy Bytch, sneaks in, from backstage and throws a pie in Rocco's face. Blinded by pie in the eye, Rocco stumbles around the ring, Crowley gets up and knocks him down, just as the Ref comes back on and does a 3 count. Crowley wins the match.


I found this all very entertaining. It matters little if you are into this kind of show. It is always a pleasure to watch a team work together to produce any show in real life and all the better, given the nature of technical limitations, in a virtual world, to see them pull it off in Second Life. I recommend this adventure to my readers and feel it is also a good place for sponsors to get more recognition of their products and services.