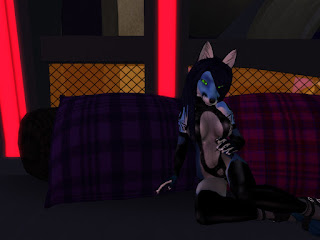 A short while ago Tantari Kim the blue vixen well known for being in Second Life over a decade has decided to give DJing a try. DJs have been around for a long time in Linden land being entertainment in clubs for earning linden, sharing their music or perhaps DJing for charity. Lots of pixelated avatars DJ for various reasons. I caught up with the blue vixen herself at her favorite hotspot Shadowquine Maltz's "The Ark" which is a popular hang out for furries. It's certainly well known for being far from G-rated.

I asked her was there an event or person who inspired her to DJ. She had this to say.

Tantari Kim: "Well, I listened to a lot of My Little Pony fanmixes, and I made a mix for myself.  I really wanted to show it off, so I did a one-time show at Cutlass."

Tantari Kim: "The Sunweavers did like the MLP set, but that was it (with what I had).  I had to fight to get airtime and I wasn't invited back.  So... I didn't become a DJ then.  It was Bix that made me a DJ."

Bixyl Shuftan (our editor), who helps manage the Happy Vixen, a club on the Sunweaver/Angel Estates, asked Tantari to DJ yet again. Tantari had a "Vixens of Science set," but she had to scramble to it put together. Tantari said Bixyl's club was low pressure, so she could make mistakes as she was starting out. When I was starting out as a DJ I had a simlar start. 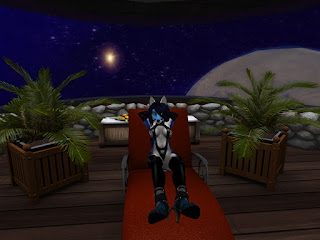 By the sound of it, in a way, Bixyl Shuftan inspried and kept pushing Tantari to become a DJ. I asked Tantari what kind of music she plays. One of her themes was the Vixens of Science set for herself. But she's not a one trick fox. She's capable of playing other musical themes for herself.

Tantari Kim: "I flipping love science!  I love robots and sci-fi and technology and computers and all that stuff.  So SCIENCE was a natural set for me. I get my themes from all sorts of things, but they have to be something I care about, something that inspires me."

Tantari said she likes playing music which pleases her furry ears. She had to this to say about her music selection, and about sharing her music with her friends and dancers.

Tantari Kim: "All of my sets have a very strong theme. It's a DJ's job to play the music you never knew you always loved. (smile)" 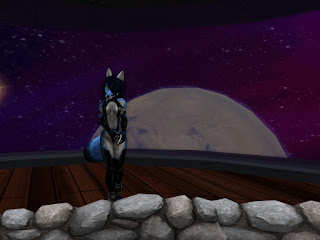 Tantari Kim: "My sets start with: 'This is a Journey into Sound with DJ Tantari.'  That's my goal: to take you somewhere.  Make you feel something.  Sometimes even tell a story. It's not enough to be a good song.  It has to fit the feel and message of the set.  Otherwise I don't play it."

I agreed with Tantari that DJ sets have to stay within a certain theme or else they will sound horrible. Making a DJ set is hard work. She was saying she spent between 6 to 9 hours making a DJ set making sure all the songs fit together like a jigsaw puzzle.

Tantari Kim: "Please come check out my sets.  Come with me on a Journey Into Sound."

Tantari wishes to share her music so much that she now DJs for three diffrent clubs around Second Life. She DJs for Rita Mariner and Jenni Greenfield's Club Cutlass, the Happy Vixen and of course the Ark where I interviewed her at. Also, Tantari has her own DJ group to join. If you want in on her DJ fan group go on her profile and join for free DJ Tantari Kim's Sound Journeys. You might expect this if you came to her sound journeys. And here's a good idea of what she plays from the fox's muzzle herself.

Tantari Kim: "I mostly play electronic dance music and rock, but I'll play anything as long as it's good and it fits my set.  Some rap.  A tiny bit of country.  Some classical.  A lot of movie and TV themes.  Whatever it takes."

As Bixyl pushed her into djing, the Second Life Newser had it's five year anniversary. So she made up some "facts" about Bixyl Shuftan such as.

Tantari Kim: "TRUE FACT: 'What Does the Fox Say' was written about Bixyl Shuftan."

Tantari Kim: "TRUE FACT: Bixyl Shuftan once interviewed a Magic 8 Ball... and got it to confess to a murder."

Tantari Kim: "Tell them 'Please come check out my sets.  Come with me on a Journey Into Sound.' "

She has to update her website for her DJ times, but she told me Saturday night at 6pm SLT and 9am SLT Sundays at The Ark here http://maps.secondlife.com/secondlife/Quarabia/187/127/501

What to hear a fresh and new talent here in Second Life? Look no further than one of it's oldest and bluest's avatars. Ms. Tantari Kim.