Nydia Tungsten on the "Anti-Christmas Party" 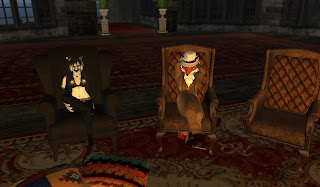 Nydia Tungsten is a vixen of many talents, video producer, sim manager, estate owner, and club owner. But before all those, she made a name for herself as DJ "Naughty Nydia," with a list of tunes from mild to wild. This Thursday, Nydia Tungsten will be DJing for her "Anti-Christmas" Party. Earlier this week, she asked to have a few words with the Newser to address some concerns she was hearing about the event. So I met up with her at her home at Mouse Hold Manor.

"Some accusations have come up that I feel need to be put to rest," Nydia explained. I asked what was wrong, and she continued, "Some say my Anti-Christmas DJ set that I do every year is because I hate Christmas and what it stands for, (that) I hate God and everything to do with Him and/or her or whatever they believe. That simply is NOT true. I respect what everyone believes as long as they don't try and force it on others. And as for Christmas, I LOVE IT, it is the one time of the year most people around the world think of others more than themselves. I have no problem with what any one believes."

"What my set does is simply lighten the mood, since corporations have been slamming us with ads since before Halloween. I love Christmas but HATE the commercialization event it has become. Let's face it ....it is BAD. Most of the world celebrates Christmas, and they sit back and laugh at the U.S. because of the riots shopping has become, 'Black Friday is when all the idiots go out and knock little kids over for a ferkin rice cooker. People like myself just want to scream in frustration over the stupid few. My 'naughty' songs are just a way to release that, not take anything away from anyones beliefs.

"If your beliefs are easily offended by others poking fun at it all in good humor, please don't come. But don't say I hate Christmas or what people believe. There is a statement in my profile that I really believe, 'Religion is like a penis. It's fine if you have one; it's fine if you're proud of it, but don't go waving it about in public. And for God's sake, don't try to shove it down children's throats.' I was religious at one time, and I loved the jokes those brave enough to tell me would share with me." 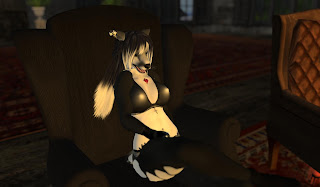 I asked, "How do you think this misunderstanding got started?" Nydia answered, "The name I gave it I think. I call it my 'Anti-Christmas Special.' Bad idea on my part I guess. But it isn't anti-Christmas, just anti-sickening sweet ads on the TV and radio that start in October. It is all in good fun and I don't bash on anyones beliefs. The songs on the other hand... well thats another story. You know I love filk, all kinds, and I pull out all the stops for this time of the year. You know most of them yourself (Bixyl). would you say any of them bash on religion?" To her question, I answered "No" as I had never known her to do so. "They are downright raunchy," she went on, "but all in good fun."

She continued, "When I started this, there were no other shows like it in Second Life. I was kinda proud of that, the idea I was the first, for at least four years now I have been doing this. A few days ago I found out there is a club hosting it's own version of it. I am thrilled. So please, before you judge, come see for yourself. That is my invitation from me to you."

I told her, "A few of them I've heard on public radio during working hours, 'Twelve Pains of Christmas,' 'Grandma Got Run Over by a Reindeer.' and one or two others. I recall one of the parodies was done by a Second Life resident, our own Shockwave Yareach." Nydia responded, "Yes, my favorite to be honest, 'Grandma got knocked up by a reindeer.' some are just... well... one of the mid-range songs I play is 'Frosty the Pervert.' And some just... well... you will have to hear to believe." "Sounds like a few would make even a sailor blush," I commented. "I even found a few more for this years event," Nydia informed.


She went on, "To be honest, my first year doing this, I just called it 'A Filky Christmas.' Well, a few who like my DJ style showed up not knowing that filk equals parodies, and left soon after. This set isn't for everyone, and I try and make sure everyone KNOWS this isn't a 'touching, heart warming Christmas special.' these songs get down right NASTY! But they're funny and I like them. And if at anytime you don't feel this event for you, please leave, I am not saying that to be a bitch. I am saying it because I won't be offended if my friends pull out because it is too much for them or they don't agree with it, I understand, truly I do, and it will not hurt my feelings at all. I want those attending, to enjoy themselves."

"BUT.... If you come and start to spot religious views that you feel we need to observe because your 'Offended' or it isn't 'PC,' prepare to be mocked. We all have our own beliefs, I won't force mine on you and ask that I am treated the same. We are all here to enjoy ourselves. If we want to be told how we are all going to burn in hell, we can go to church. I personally believe religious views should only be shared if asked."

I asked where and when the event would be. Nydia told me, "I will be doing it this Thursday at "The Primal Passion Club" from 4 to 6PM. Sadly, this will be one of it's last events. I have learned this from my SL daughter Rayven. She really did a great job setting it up. I was hoping this club would do better. I love the build and style of it."

"So please come and enjoy a twisted Christmas with us. ... I think I may go back to (calling it) that, just to keep misunderstandings like this from happening."

Nydia and I would chat a little longer, and eventually head our separate ways for the day.

So for Thursday December 17, be sure to head to Castle Primal Passions at 4PM SL time to enjoy the "Anti-Christmas" Xmas parodies event by DJ "Naughty Nydia" Tungsten.