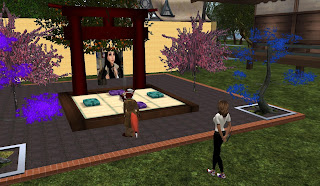 A few days ago, I was contacted by Vickie Maidstone. She told me she had something to show me. I accepted her teleport request, and after a moment for they grey shapes to take form and color, I saw what looked like a shrine in front of me.

"This is a memorial shrine for Riko Kamachi," Vickie told me, "she passed away last year a year ago this month. It was a shock to the relay community. She was a member of Team Strange Journeys and a very sweet person to be with, I met her in the Dublin sims a few years back. Always out going, a kind word to all she met. ... She fought her battle and was tough to the end. But sadly we lost her before relay started last year."

I asked if it was know she was ill. "Yes," Vickie told me, "We gotten updates from her team and we kept her in our thoughts and prayers. To me, it was personal, to know somebody like her, gone but not forgotten." I asked what she was best known for outside being a Relayer for Strange Journeys. "I don't really remember much but she was always a party goer, she always knew how to make times together fun and she was very well respected no matter where she was. ... she was very much into Hogwarts according to what Cuddly Waffle and others told me. The last I spoke with Riko was in April 2014. She may have been in after that but I'm not sure." 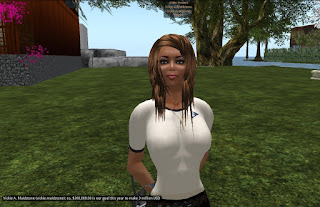 She directed my attention back to the shrine, "But today, I had been working on this and it all came together and I made this for her team, and told them this is a gift of love from me to them. It will serve as a reminder of WHY we relay. ... honestly I cried, because it meant so much to me. ... Some reason, I did this this morning and it all came together in a way I didn't expect."

beginning yet to be," Vickie continued, "This year into 2017 I am making it a mission to talk more about what as a survivor it means to me, I will been relaying 10 years in 2017. So this is special. When I even first joined Second Life, the average time was 2.5 - 3 years, think I lasted a bit longer. If it wasn't for Relay, I (would have) been long gone before now, but I have a mission yet to finish. So I (have) been around." 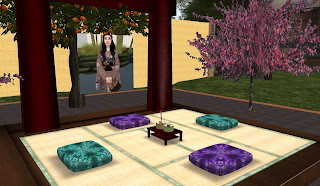 When I expressed my opinion that the Relay teams would have plenty in store for the season, Vickie responded, "Yes we will. Everybody is getting fired up and its gonna be a year for sure. ... I'm trying very hard to stay upbeat and positive, I know that last weekend was a bit rough in a number of areas we had concerns with. So, I'm just gonna stay positive and go like crazy to do my part and raise what my team can. I think the most important thing is being positive and knowing we're giving our all. So, $300,000.00 is our goal this year to make 3 million USD. ... We're gonna do it."

Vickie drew my attention back to the shrine, "So anyway, I thought I share a little something with your readership. ... it's a labor of love ... As a foot note, I will present this to Team Strange Journeys. ... I will be talking with them soon."