If you’ve seen some of the standup comedy scene in Second Life, chances are you’ve seen and heard a certain blonde female avatar with a male voice behind it: Lauren Weyland. She appears on the weekly Lauren Live Comedy Show, as well as other performances. Recently, I sat down with her at the location of her show in the Cookie sim, and asked her a few questions about her Second Life and career.

Bixyl Shuftan: So, how did you first find out about Second Life? 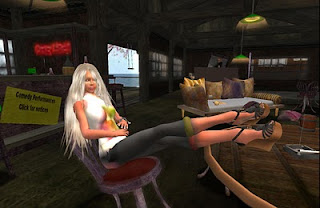 Lauren Weyland: Back in Sept 2006 I saw something about Sony in here, so I decided to take a look. I created an avatar, but didn't come in very far. In Dec 2006, I saw IBM was in here and I came in then. Approx. Dec 15th, I was logged on and in, and have been ever since.

Bixyl Shuftan: How did things go in your first days here?

Lauren Weyland: Well .... anyhow, I met some friends at Hobo and wandered around, got pregnant, had a kid. And then the guy who owns this and another sim (pre voice) said, there should be improv in SL. So we met in team speak, Thinkerer Melville, Geo Meek, and me. And I caught them camming up my skirt, and Think said I should do comedy.

And so I have for nearly 4 years. I did the first show ever done in SL voice. Much of my work is about SL. Some of my shows are on treet.tv. Also my web page http://laurenweyland.com with links there. Oops! Updating my bio there too.

Bixyl Shuftan: Well, I can't get around this question, how did your friends react to hearing a male voice when you went up?

Lauren Weyland: Well, that was interesting. Think said as long as I remain in character, it would be, like ... No one thinks of Mickey Mouse as a male falsetto voice, so everyone just hears me as a strong woman.

Lauren then handed me a notecard, “That’s a bit updated, my bio. Still missing much, but such is life.”

Lauren Weyland: Yeah, joke. You should listen to my skits on "Hair Removal," The Stance and Pregnant on Treet.TV.

Bixyl Shuftan: (chuckles) I'm sure people will look for those after the interview.

Lauren Weyland: There's not much more to say other then I'm a poor girl trying to make enough Lindens to support my daughter Lula. Some people get a bit upset when they hear me. Most laugh. I remember once when I was doing a show, this guy said to his girlfriend, “I wish that guy would shut up so I can hear the comedian.”

Bixyl Shuftan: (chuckle) And ever since, that line became a reoccurring joke I take it?

Lauren Weyland: Oh, I joke around. Sometimes I say how some guy was hitting on me and I just said, (in voice) "Hi Big Boy" and he shuts up

Lauren Weyland: But I love being Lauren, and the people who have found a laugh in SL. My show is where audience has their voices on. So we are all talking, rowdy, noisy etc. Nothing else like it. Musicians turn off voice, plays turn off voice. Here people come, relax, laugh, talk. 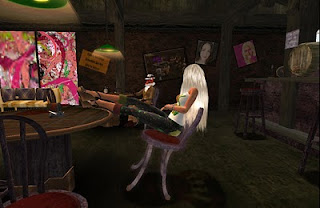 Bixyl Shuftan: Yes, I've heard a couple comments, seeing the voice and avatar as part of the comic act.

Lauren Weyland: Yes, I think of lag in SL like having menstrual cramps.

Bixyl Shuftan: What time can people see you during the week?

Lauren Weyland: Tuesday With Lauren 5pm, and usually after we have a music gig at 6pm ... other than that are booked shows.

Bixyl Shuftan: I see you're also in a number of benefits.

Lauren Weyland: i've done many of them, yes. Also just finished a voice over for an original play in Gor.

Bixyl Shuftan: A play in Gor?

Lauren Weyland: And another play, I did male voices for that. Finally I'm in something big. A group of writers, producers, etc have gotten together and created a new show called “Be My Guest” with TerryLynn Melody as the host. I'm the hairdresser in the opening of each episode in the green room. They are doing mixed media. SL and real life, musicians are show in both, sound engineers etc., and I'm the comedy. They are official with Rezzed TV.

Bixyl Shuftan: How has the show gone so far?

Lauren Weyland: Fantastic. I'm just this first 5 minute opening scene. Phaylen Fairchild is one of the writers and she help direct me in my part. It will be out in March, first the plot, then nine more episode. And the hope to make the web love the show, since it won't be SL centric. Also Chantal Harvey is involved, Flimsey Freenote.

Lauren Weyland: Oh yes, a large group involved. I don't know all the stuff but Flimsey has the promo done. You should contact her. Musicians include erryLynn Melody, Hazideon Zarco, Phil Johnson, Frogg and Jaycatt. ...I've also performed live at last two SLCC in SanFrancisco and Boston. ... Anyhow, I enjoy my life here, and in first life

Bixyl Shuftan: Do any of your first life friends know what you do here?

Lauren Weyland: Everyone knows what I do here, my kids etc. If you try to hide your life it sneaks up and scares you. No one knows everything about anyone.

When guys make fun of my voice, I just tell them, “If I looked like this in firstlife you'd just tell me to be quiet.” 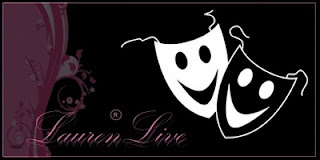 Bixyl Shuftan: (chuckle) Do you have any advice for those interested in getting into standup comedy, or interested in hosting a standup event.

Following the interview, Lauren took me to the set of “Be My Guest,” where Flimsey Freenote had just finished some filming. “ ‘Be My Guest’ is a half hour variety show,” Flimsey told me, “A celebration of music, comedy, and artistry from a virtual world that spans multiple realities. It brings together the best of independent music, comedy, dance, and filmmaking. Using virtual worlds for collaboration and performance, the show also weaves in live events and performance in a variety of brick and mortar communities.”

Lauren can be seen on Second Life at "Lauren's Place" on Cookie Island, (129, 177, 21), Tuesdays at 5PM, “a lively, open comedic conversation. No tipping. Just fun and laughter.” Her shows can also be seen on Treet.TV, as well as a once a month live broadcast.