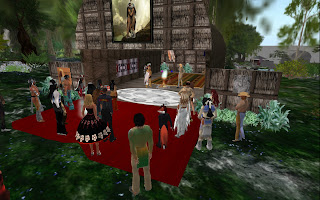 People hold virtual weddings in Second Life almost every day. Each one is special in its own right. But on Saturday the 12th, two residents had a ceremony that was definitely an uncommon theme on the Grid. The notecards they sent their friends explained it, “You are invited to the Cherokee wedding ceremony of Pint Hoyes and Kram2593 Footman on Saturday, February the 12th at 10 SLT. Native dress is appreciated, but not required.”

The wedding took place at the Spirit Nations sim inside a lodge. The sim itself played American Indian tribal music. The ceremony was conducted by Redtail Magic, recognizable by his long headdress of feathers. Quite a number had been invited, so Redtail asked everyone to get in the lodge or just outside it. Most everyone wore some kind of American Indian wear. Me, I wasn’t sure how well a simple freebie outfit I picked up at a cowboy roleplay sim would work, so I just came in a tuxedo. Perhaps I was worried about nothing, as no one complained about anyone’s wear, “Everyone looks so nice, by the way.” 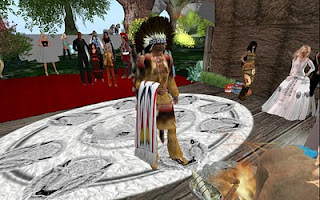 It was soon time for the wedding to start, Redtail asking, “Let me know when you are ready to go, Kram.” “Okay, where am I going? ... Just kidding, ready!” Retail then told everyone the ceremony would be done entirely in text, then began, “Aho, Aho. Welcome to the Cherokee Wedding of Pint Hoyes and Kram2593 Footman. I ask all who are gathered here to offer peace and loving kindness to this special couple as they share this path. May the longtime sun shine upon you both, the sweet light within you guide you on your way, and may a good wind be your road.”

“I will now come forward and escort the Groom into the council house.” Redtail then brought Kram into the building, followed by Pint, “Now I come to escort the Bride into the council house.” With the couple both inside, “The couple meet at the center near the sacred fire. The sacred fire is the gift of light, knowledge, heat, the bedrock of civilization. The Basket carriers come into the council house and stand beside the wedding couple. ... The Groom’s brother stands beside the Groom. He holds the gifts of venison and a blanket. Food and a warm bed for the bride - symbols of his ability to support her. The Bride’s mother stands beside the Bride. She holds the gifts of corn and a tanned skin. Food and clothing for her Warrior Husband to be.” 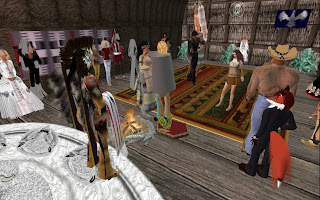 Pint and Kram stood together under a blanket, which was blue (but to my camera appeared gray from lag), and Redtail continued, “The Bride and Groom wear blue blankets over their shoulders a traditional symbol of their Old Ways - the single life. ... Sacred Fire, Fire of inspirations, Fire of transformation. Oh Sacred fire, burn within these two blessed loved ones. May their lives together be as long and eternal as your flame. Tunkasila, Great Grandfather, we thank you for the gift of this day. Pilamaya yelo. Ah'Ho!” Pint, Kram, and several in the crowd responded “Aho” in turn.

Redtail went on, “Now the Bride gives the Groom a red and black belt that she has made. ... The groom accepts and puts on the belt, accepting the union. The belt replaces the wedding ring in modern society.” “Thank you, Pint,” Kram told her, “I will wear this belt proudly.”

Following the vows, Redtail told everyone, “The bride and groom share a corn drink from a double sided vessel. This symbolises sharing the fruits of their labors - crushed dried corn and water. They drink East, West, North and South declaring their marriage to all the Earth. Then passes the vessel to the Chief. I hold this vessel up toward Father Sky, down to Mother Earth, and toward the couple. I ask the spirits of Heaven and Earth to bless this union. I ask them to guide the bride and groom. They are the ‘center’ of the union, and must constantly reflect on their inner thoughts to make the marriage work. The vessel is passed back to the couple, then thrown down to the ground and broken to seal the wedding vows. The broken fragments will be buried, and returned to Mother Earth.” Someone whispered this part of the ceremony seemed a bit Jewish. He was answered by someone else in the audience, “some Cherokee tribes have adopted a few Hebrew traditions.”

Redtail continued, “We honor all you created as they pledge their hearts and lives together,” not paying attention to Kram tickling Pint behind the blanket, “We honor mother-earth and ask for their marriage to be abundant and grow stronger through the seasons. We honor fire and ask that this union be warm and glowing with love in their hearts. We honor wind and ask they sail though life safe and calm as in our Father's arms. We honor water to clean and soothe their relationship that it may never thirst for love. With all the forces of the universe you created, we pray for harmony and true happiness as they forever grow young together.”

“It is done. Ah'Ho!” And with Redtail concluding the ceremony, several did some “yip-yip-yip” emotes, as well as others saying, “ah’ho” in turn. People began congratulating the couple, wishing them well.

Following the ceremony, there was a reception at Club Shiraz, with Rae Delicioso as the live entertainment.

Pint Hoyes is a club hostess in Second Life, working at the Queen of Hearts riverboat club at Mystery.