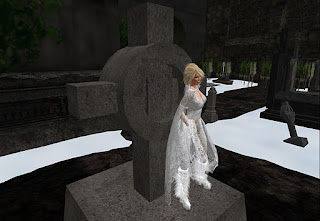 Midnight veils the small town cemetery in the free-form dark role play community of Crossroads. It is the year 1871. Within the gated Gothic cemetery stands an angel upon the platform of a cross, she is a bright illumination in a city haunted by a curse. She is known as Ravenal Ashby.

A traveler regarded as an outsider, I tread cautiously on the snow-covered grounds, surrounded by Princess Guiniverre Despres and numerous Crossroads residents. The Princess is dressed in a winter gown as black as night. Her ebony hair lies freely upon her shoulders. She is nothing less than beautiful, but there is a protective nature about her that suggests, rather than implies, that she is to be feared. She stands in front of me blocking my path, but it is not a confrontation she seeks. Openly she speaks to me about the town.

"The town was founded years ago by my grandfather, a baron, who brought in others to build it," explains Guiniverre. "A shipping business began, then wineries were added and the people appeared and it became a busy little town.” We stand alone, but we do trade with others."

She stated that there is both a countryside and mountainous terrain and that the town was founded some forty years ago (four years in SL).

"I think we have an equal mix of businessmen to artist. A mixed bag of personalities for sure, but everyone seems to add a flavor to the town. All together we are one delicious drink, so to speak,” she voiced with a grin.

Asked if everyone contributes equally, Guiniverre replied, that they don't. There are the overachievers. However, she felt that the town bum is just as important as he or she adds her personality to the mix. No one wants everyone to be the same.

"Our personalities should be as unique as our fingerprints," she tells me. "God knows if there was another me. The town can barely stand the one," she jokes, adding that her family adores her as well as the angel beside her.

It is ironic, yet natural here, that an angel is devoted to this town, but it is for a reason.

"We protect the town laws, Miss. That is our job here," Ravenal informs me. "Our mission is to bring light in a town cast in darkness.

Though I am told the darkness is because of the towering mountains that surround the town, Ravenal suggests otherwise. 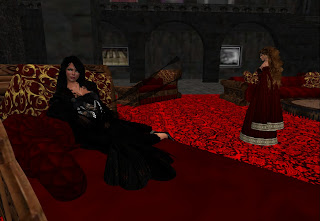 "Or perhaps it is the curse put on the town because of your grandfather," Ravenal claims. "There is a curse on the town. Demons were involved, which is the reason I am here."

They then choose to speak out of character. Ravenal owns Crossroads, but her sister, Guiniverre co-owns a number of other sims with her. Guiniverre built Crossroads so they are pretty much in a partnership. She does 95% of the sim building.

"We offer the world of darkness role play. We offer VTM role play, Vampires of the Masquerade," Ravenal explains. "We also offer various races of role play such as demons, angels, vampires, fae, steampunk, neko and even a few draconic types." 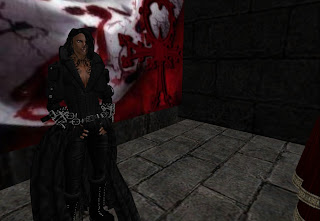 On the character roster are 40-50 role players on the sim any given evening. They allow those who abide by the rules, have a concept and a desire to role play with them. There is a justice system in play that works often, but fights do occasionally break out from time to time. What's interesting is that they have a role play university for those just learning how it's done. They use the CCS hud, which is based on time spent in character. There is soul hunting with the demons.

"The CCS hud allows for an actual bite, but our VTM vampires do more role play biting then CCS biting," said Ravenal. "We have a very strict no “Out of Character” policy while in the IC zone. And, yes, you can live where you play!"

Be aware that this is a dark role play community, which means you can be killed. It might take awhile to be resurrected, but you do rez back to life. You are given the opportunity to tell them the degree of dark participation that you can handle comfortably. Also, VTM means that the characters do not openly state they are vampires and other paranormal beings. They take on normal lives which veil their true form. That's the premise of their existence.

If you feel like experimenting, give it a try. For more information, log on to http://www.crossroadsroleplay.com/.
Posted by Bixyl Shuftan at 6:00 AM