Dusk Griswold and Her Puppet Fun


It’s doubtful that anyone who has a TV has not seen Sesame Street. I as a child remember seeing Big Bird and the other various puppets. It was magical. As a kid, they seemed real. As a kid, we had no idea these were puppets and not real beings or people. Later on growing up we figured it out. 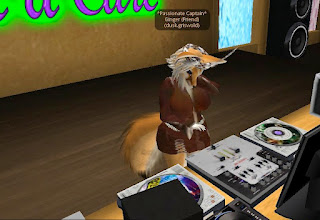 I recently talked to Dusk Griswold, another Sunweaver (the last article I wrote was about Nydia Tungsen) about her and her puppetry. According to Dusk, she says it’s a dying art. I’m not so sure. Puppets are still used today in shows for children. The movie “Team America World Police” came to mind too, but I can talk about that later. Also recently there was the real life movie “The Muppets” that came out last year.

Growing up, Dusk watched Sesame Street and The Muppet Show, and was always fascinated by the puppets, and knew one day she wanted to perform them. More recently, she discovered a show from Canada Ccalled The Longhouse Tales. While she said the writing was not that great, the puppets were nicely done, and the look of one inspired the design of her puppet, Vixie.

Dusk seems very lucky too. She has admitted in real life to meeting one of the puppeteers named Terry Angus. As a puppeteer, he worked on various muppet projects. One thing Terry did work on in particular was the show "Fraggle Rock." I remember that show with Muppets living in a cave. Dusk says he is a talented puppeteer and craftsman. In fact, her puppet named Vixie was created by the same guy: Terry Angus. When Dusk showed me pictures of Vixie the puppet, I said it’s a huge puppet and very well detailed. Dusk Griswold answered, "Should be they were built by a former Muppet performer."

Amazingly Dusk also met a Pixar employee and has a very good drawing of Vixie by him when Dusk was describing Vixie, "One drawing was done by a Pixar artist." Pixar is the same company who made the "Toy Story" movies and other animated moives. In fact I remember seeing the first Toy Story in a movie theatre as a teen. Dusk showed me a video of Vixie performing live. Well Dusk was puppeteering, and Vixie seemed alive above the table. Vixie looked almost alive by Dusk’s deft hand motions at a furry convention. It was a funny show with humor that you might see from a Muppet show. Dusk wanted Vixie the mad scientist to create a nuclear power coffee maker, commenting, "More like a nuclear powered coffeemaker." I chuckled, "That's one way to get hot coffee."

Dusk has also met other people from the Muppets in real life, "I have met Karen Prell, Mike Quinn, David Barclay, and Terry Angus." Sounds like the real life Dusk has gotten around meeting lots of neat people. She has met some interesting people. I commented the only famous person I met was Charles Feelgood, a real life house DJ from my area.

Ironically I mentioned the R-rated movie “Team America World Police” which features puppets which are designed to look like real people. The same people who created "South Park" made this movie poking fun at adventure/action movies with their twisted sense of humor. Dusk said she hasn’t seen it. I recommend it to anyone who likes South Park, or anything to do with puppets.

Dusk thinks Muppets/puppets are a dying art. Maybe it’s not amazingly popular like video games or the Second Life we all inhabit, but it still has some life to it in the real world.