Om Sunday January 6, Relay for Life member Bain Finch held an event for friend and fellow Relayer Aryon Dagger. Aryon's computer had broken and she couldn't afford a new one, just as she was facing surgery for cancer followed by weeks of recovery. So Bain talked to a few other friends, and they set up a DJ music event high over the Lemonia sim. Bain wanted to keep things somewhat quiet at first, wanting the event to be a surprise. But on the day of the benefit, it was out and clear in the open. 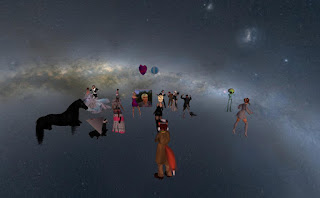 The event began at 10AM SL time with Vic Mornington DJing. I dropped in shortly after 11 with Bcreative Wild playing the music. Later on, Madonna Daehlie and Nuala Maracas would DJ at 12 and 1PM respectively. The place was on the inside of a sphere with the appearance of partying in the middle of space. Among the others there were Avariel Falcon in his dark unicorn avatar, Panza Eilde, Saffia Widdershins, and more. One was in a green alien avatar. Arnold (Gager) of Steelhead wraped himself up in a Christmas box, getting some chuckles, "Arnold, I don't know why, but I want to open you (laughter)." "You know cats and boxes."

During the event, the people sent words of encouragement to Aryon, which Bain relayed to her, "Hey Aryon. Go ahead and eat all the good stuff that I can't eat. You need your strength to get well, so we can all meet up in Florida." "We all love you, Aryon, and we're all with you!" "Aryon, we are all with you in this fight, till we all emerge victorious over the evil C, biggest Huggs." 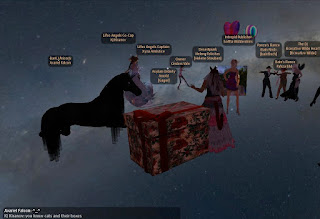 The words truly touched Aryon's heart, "I cannot begin to tell you all what this means to me. I asked (Bcreative) to play this song for you all because you DO open my eyes when I cannot see through the tears, you DO give me breath after you have taken it away with the strength and love you share not only with me but all those on the dark journey. Bain and Panza, you have listened to my rants and raves, my laughter and tears and I cannot thank you enough. To everyone who has offered support and hugs and donated ... I WILL not give up ... I fight for you ALL. Thank you and I love you all SO much." these words were followed by the song, "Thank you for loving me."

Yours truly had to leave early, but I did get a message from Bain Finch later, "DONE!! (We) raised enough for Aryon and I'm at loss for words on how to thank every one." A few days later, Bain announced that the surgery had been a success and the cancer appeared not to have spread. Aryon was on her road to recovery, which would take several weeks. And thanks to Bain, she would stay in touch with her friends.