Ask DrFran: It’s All About Perception


Dear DrFran: I don’t think it’s the lack of face-to-face First Life contact that caused the problem I am about to share with you. I think it was a difference in worldview. I just closed out a chapter in my Second Life that causes me a lot of emotional pain. I wonder over and over how I could have so missed the mark.

My guy and I didn’t meet and start the usual whirlwind SL relationship of: 1) hello; 2) let’s have sex; 3) let’s be a couple; 4) that’s enough; 5) good-bye. We were united over an interest in building and creating, and that’s what brought us together. He IMed me one day to discuss something he noted in my profile while we were both in the audience of the old Show and Tell. The more we talked, the more we found that we had similar interests in travel, culture and were both fanatical lovers of the wonder that is Second Life. We chatted pretty regularly for almost eight months before we actually spent any time together. I invited him over to my land to see a build I was working on. Thus began almost three years of just about daily contact, hours and hours of time logged building together, creating a sim, and talking, talking, talking. In the entire time I was with him, I was not ever bored or looking for topics to discuss. We were both interested in many things and interested in each other’s interests. I learned a lot from him, and I believe he learned a lot from me.

The only fly in the ointment was the way we fought, which we did with increasing frequency as time went on. Our fights usually started with me getting angry at him because he didn’t log in until I had waited many hours, or he was critical of the things I was building. I guess that’s not such unusual stuff, but as time went on it seemed that our differences were irreconcilable. When I got angry, he would just get angry back, and we descended into yelling back and forth without any common ground. No matter how many times I told him that I got angry because I cared, he just refused to accept this and move an inch in making peace. He brought up ex-girlfriends in SL all the time, despite the fact that I told him, assertively and calmly that this behavior upset me. I asked him not to do this, and he did. Eventually, we just could not come to any reasonable compromise with each other. From my standpoint, every attempt I made to tell him that I cared was met with a list of all the things I had done wrong. Despite my feelings for him, which persist to today, it had to end. I feel like a junkie without my drug. I went from knowing there was someone to talk to, to having a hole in the fabric of my Second Life. 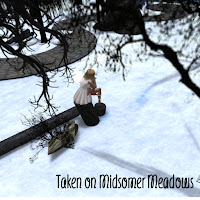 I wish there had been some way to let him know that I really cared for him—his intelligence, humor, building and scripting skills, and just how zany he could be. However, this is done. I know I will eventually get over this, but what could I have done differently.

Lonely on the Mainland.


Dear Lonely: I am sorry for the pain you are feeling now. There is probably no worse pain than that of a lost relationship. You have asked what you could do differently, so I will not comment on your significant other’s behavior. Besides, you said you two see things differently, thus I don’t know how accurate your descriptions of his behavior might be.

I can say some things to you. Yes, I know you are hurt. Yes, I know that you cared about this guy. Yes, you had a real and long relationship with him, and unlike many others DrFran believes it’s all real here. You can run, but you can’t hide from who you are.

That said, a lot of the things that you did were designed to push him away. (NOTE: In the interest of protecting the anonymity of this avatar, I removed some details about events that occurred, but my answer reflects some of this additional information) Nobody likes folks who are demanding and needy. I understand that you cared about him, but responding to his lack of logging in with anger could only serve to alienate and anger him. I am not blaming you; I am trying to help you see what he might have perceived. If you really cared about him, the best thing would have been to ignore his attempts at angering you by mentioning ex-girlfriends. Each time you got enraged, you pushed him further away.

People are so imperfect, me, you, your ex. When we care about someone we learn to make peace with what we see as their faults and shortcomings, or we decide not to accept and leave.

Lonely, if you are lucky enough to enter another relationship see if you can: Live and Let Live a little. You sound like a caring person, and I hope you can learn to lay back a bit, and let people be who they are. Meanwhile, I hope you have other friends and interests to engage your time. If not, ask yourself why you invested so much in just one person. You used the word “addict,” and I hope that you care for people rather than get addicted to them. Hugs and best wishes. DrFran

If you have a question for DrFran Babcock, please send her a notecard, or you can email at: DrFranBabcock@mac.com

DISCLAIMER: Ask DrFran is not meant to reflect a professional mental health opinion, nor necessarily the opinions of SL Newser. The primary purpose of this column is entertainment and journalism.

ADDENDUM: A reader contacted me following the Weighty Issues column of last week with some very good, different, and perspective changing views on overweight, health, and society’s thoughts about obesity. The reader used facts, research and logic to dispute my opinion that obesity presents health problems. If anyone reading this is interested in receiving the scholarly information on this topic, please email me at the above address.
Posted by Bixyl Shuftan at 6:00 AM