Ask DrFran: "A Buddy Comes Out"

In real life, I’m a bit afraid of gays, or "homer-sexuals" as my Dad called them. He considered them bad news as men in general had only one thing on their mind, and gays were different only in they'd be after your behind instead of bragging to you about how much they got. A friendship with one, he told me, was impossible. And he felt that if any were dumb enough to show themselves back in the farm community he grew up in, the expression "he needed killin’" might be brought to bear.

Coming to Second Life™, I found a few, but not many, at least among the men. There have been a few in their profile who called themselves "bisexual," but not many male homosexuals. Maybe in SL's Libertarian "mind your own business" attitude, most keep quiet about it, but I can only guess. But some haven't. Some kept to themselves. Others acted like my Old Man warned me they would, being pests and flirting with any guy who was unlucky enough to draw their attention.

For most of the time, I didn't think too much about the subject, being occupied with going about in Second Life™ and making friends. Among my first friends was "Kay" (not his real SL name) a short, furry guy who liked music and would occasionally play at music events at a favorite hangout of mine. We would also talk with other friends about computer games and goings on in SL and first life, as well as places we’d seen. We'd also do some activities together, such as a weekly tour group in SL. He could be a little sad at times, saying he had trouble finding someone in real life, but I thought nothing of it.

Then after over a year, Kay told me he had a bit of news. He admitted he was gay. He told me he had dated girls in first life, but just couldn't feel an attraction. This bit of news was stunning. I thought I had known him, and it turned out I hadn’t.

I didn't feel afraid of him—between his small size and his passive, well-mannered attitude. But what did make me worry was when Kay told us who he was in a relationship with. The guy, who was not really gay but bisexual, was known to be a troublemaker, harassing a lady friend of ours in first life. I reminded him of that, saying this guy had been bad news. But he persisted, showing up with him at his side. So I acted friendly, hoping my buddy was right in that he changed. 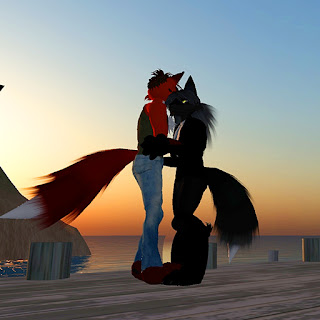 As it turned out, the troublemaker hadn’t changed. Some time later, I heard from a mutual friend they had broken up. It was a few days later when Kay finally logged back on. I met up with him, and my buddy was in tears. He had found his partner in bed with another guy, basically laughing off their relationship. He had not only given his heart and found it thrown back at him, but in exposing his biggest secret, many ‘friends’ had stopped talking to him. He felt more depressed than ever.

It was at this point I did something I thought I’d never do. I gave the guy a hug—first time on SL I had ever done so to another male.

Kay remained on Second Life™ a little longer, but eventually he stopped coming on a regular basis. He would pop in once in a while to say hello, but he had more or less moved on.

I’m not wondering what makes a guy gay. Whatever happened, he didn't ask for it. But what I do wonder is what made him “come out?” There are many stories of guys who have done so, only to be shunned by friends and family alike. Surely he would have known. Why couldn't he have just kept quiet about it?

Thank you so much for your thoughtful letter and question. It is a testament to your maturity that you did not go on to embrace unquestioningly the beliefs of your father, as so many people have over time. You have had the ability to see things for yourself, and to take people as you meet them, without prejudice (note: prejudice means to pre-judge, and you didn’t).

Kay is not an unusual case. I have met many gay men and lesbians in my days on the grid. Second Life™ can provide a hiding place for people who have secrets. My own belief is that no matter where you go; there you are. No amount of running and hiding can allow a person to hide from themselves. The pain of not being truly who one believes themself to be is often unbearable for people. I believe that is what was behind Kay’s need to “come out.” Kay was unable to be who he was, and that dishonesty hurts people. I don’t know if you have ever had to appear in a human avatar in Second Life™, but if you did you might know what I am talking about. I believe you said you are a furry, and that is your identity here on the Grid. So, imagine having to act “human” here, and interact with friends and lovers as a human, when every cell in your body tells you that you are a fur. Most people could not do that for any length of time.

I am sure that Kay was well aware of the stigma of being homosexual. Despite all of the growth we residents have made and show, many folks still fear “homer-sexuals” Kay took a risk that he had to take.

On a more psychological note: It has been my experience that gays and lesbians prefer to have their affections returned. A homosexual who pursues a straight person is probably dealing with emotional difficulties. It’s no different than the woman or man who always seems to find the one person who will not or cannot return their love. Generally, without some insight they are unable to change this behavior, and will go on looking for love in all the wrong places for the rest of their life.

Kay made a bad choice in a partner; something you and his other friends warned him about, but without success. Is this any different than a straight relationship? I think not. People will love the wrong people, but mostly they will pursue people whom they think will like them. Poor Kay will heal, but his experience in Second Life™ may have soured him for future attempts at being gay here. Not because he is gay, but because he had a bad experience.

Your hug was an expression of true caring and compassion. I applaud you for the bravery it must have taken. Think for a moment…Kay didn’t pursue you romantically, so he must have seen you for what you are: his friend. Maybe he will make another try in Second Life™. We know there is no way to say, but I am glad that he has your for a friend should he try to stick his snout in again.

Thanks for your heartfelt letter.

Obligatory disclaimer: The column Ask DrFran is the work of DrFran Babcock, and may not reflect the views of SL Newser as a whole. Please direct any correspondence to DrFran Babcock. I look forward to hearing from you.
Posted by Bixyl Shuftan at 6:00 AM