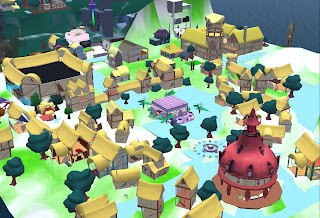 A few years ago, the 80s girls' cartoon "My Little Pony" was brought back in to production with a new style and storyline, and soon developed a cult following. It wasn't long before the "Pony" fandom was reflected in Second Life with the creation of an avatar based on the cartoon equines. Called a "Brony" after the slang term for "My Little Pony" or "MLP" fans, the avatars quickly became a hit, helped by the fact they were given away for free. And it wasn't long before a community of ponies came about, soon followed by a couple sims. Despite a setback that would have demolished some communities, the Ponies bounced back with a new sim, BronyTown. Within months, the community had expanded to several thriving sims with no real sign of trouble.

Since Xymber's articles on the recovery, I hadn't heard much about the sims, and an Internet search didn't reveal much. My partner Jasmine had been to the Pony sims a few times, and recently invited me over to take a look to see things for myself. So we both headed over. With "My Little Pony" being aimed at girls, although it's 21st Century versions have appealed more to teenagers and young women, I had never seen a single episode. So Jasmine had to explain a few things to me.

The place itself was built and textured in a style that looked light-hearted and cartoony. But the colors tended to be bright, with some pastel shades, making the place resemble the setting of the cartoon. It resembled a fantasy village somewhat, with the yellow roofs having the shape of thatched straw ones. The streets were not grey or black, but had a light blue color. 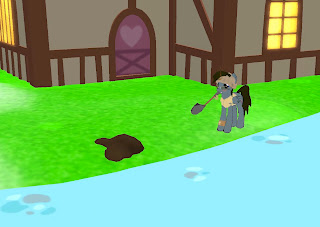 The pony sims were about to have an event, the "Winter Wrap-Up," somewhat based on a "My Little Pony" episode where the characters have a spring festival. And Jasmine had been working on one of the prizes to give out: a pair of sunglasses, "Winter's done, Spring's springing. Sun's com'in out, Sun's in your eyes. What'ya do? Reach for your sunshades." The event was partially to bring the locals "together to recreate an episode of My Little Pony," but it was also a chance for visitors to drop by, "you get to meet everyone, make friends, see the town in it's entirety."

Showing me around in her own pony avatar, she was wearing a brown jacket over the front. It was for one of the event's teams, "The brown outfit is for the Critter team, green is the Planter team, and the blue is the Weather team." She also showed me a shovel and hoe, "the shovel is for anyone, used to remove snowpiles. The hoe is for anyone to 'garden.' No additional thing for the weather team. Using the hoe or the shovel to do a 'thing' gives you one sunshine. You gather those for these here prizes." 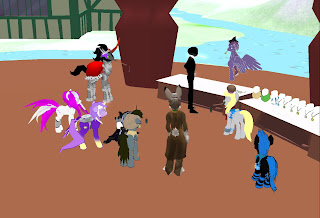 Going up to one group at the town center, most everyone was in a pony avatar, except for one whom was a vaguely human-shaped figure all black except for a shiny yellow circle for a face. He was called Lamp. He explained they were still setting things up for the festival, "we're trying to make this a 'moneyless' event. … People can earn prizes using points, so they can get some really cool stuff without spending a cent." Linden donations were perfectly fine, "but it's not about profit, it's more about bringing the community closer and having fun." Nearby were collections of shovels and hoes, which anyone could take one from. 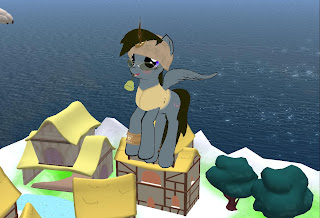 One of the ponies commented, "I had fun last night busting clouds (chuckles)." I asked about that, and the local answered, "Yup to clear the shies and let the sun shine in and melt the white snow." Jasmine told me, "Well up here there is clouds that rezz. All you do is fly into them to pop them. It gives you 1 sunshine." Someone suggested some clouds might be worth more. She and one of the others briefly went up in the sky to demonstrate. For the hoes, there were dirt mounds around the place, "supposedly you 'plant' something, and you get sunshine points."

At the town center, here was a sunshine counter which when touched told locals how many points they had, "Your sunshine burns brightly at 578." This point system was around long enough for others to joke at. One pony lying down had a fake tag over her head, "10,000 Sunshine." The occasional chuckle from others was a sign no one was buying it. 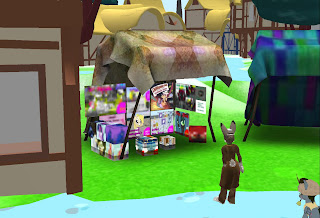 Looking further, there were a number of stores and some market areas with stalls. Due to the nature of the place, everything had a G-rated limit. Of the goods, Jasmine commented, "Some these things I look and scratch my head. Other things are pretty good stuffs." There was also a place where movies were shown, the "Trot-in Theater."

The ponies certainly had a whimsical nature. It didn't take much to get them joking around, and it was often spontaneous, "Oh my God! MUFFINS!!" "Sugary Goodness!" Looking around the place, other groups of locals also broke out in spontaneous whimsy, running around and doing some "flip" gesture or something, or cracking jokes. There was also a "Doctor Hooves" going about in a "Tardis." Jasmine commented of those making themselves part of the community, "You get to play. This whole place I've noticed brings out the kids in everyone."

There was one thing about the community that Jasmine didn't like, one that all groups in Second Life shared. Although she was wearing the avatar to help get in the spirit of the festival, there were a few locals whom wouldn't talk to her unless she was wearing it. While everyone important here would happily talk to visitors, she felt that was a reminder that no matter where you go, there are always some reluctant to speak with others unlike them.

But still, there was no shortage of friendly folk here, in this whimsical, happy place. If you're looking for a place to explore that's different, by all means give BronyTown a look. There are also several other pony sims. East Trotsdale, West Trotsdale, Trotsdale Heights, Everfree Forest, and the castle sim of Canterlot.