Have you ever heard of "The Visible Woman?" In the 1960s and 1970s, these model kits were available for either adults or older kids interested in anatomy. When assembled, they represented a body with transparent skin, allowing one to see the bones and organs inside. I was reminded of these models when I ran into a certain resident in Second Life, Beckye Burnstein. 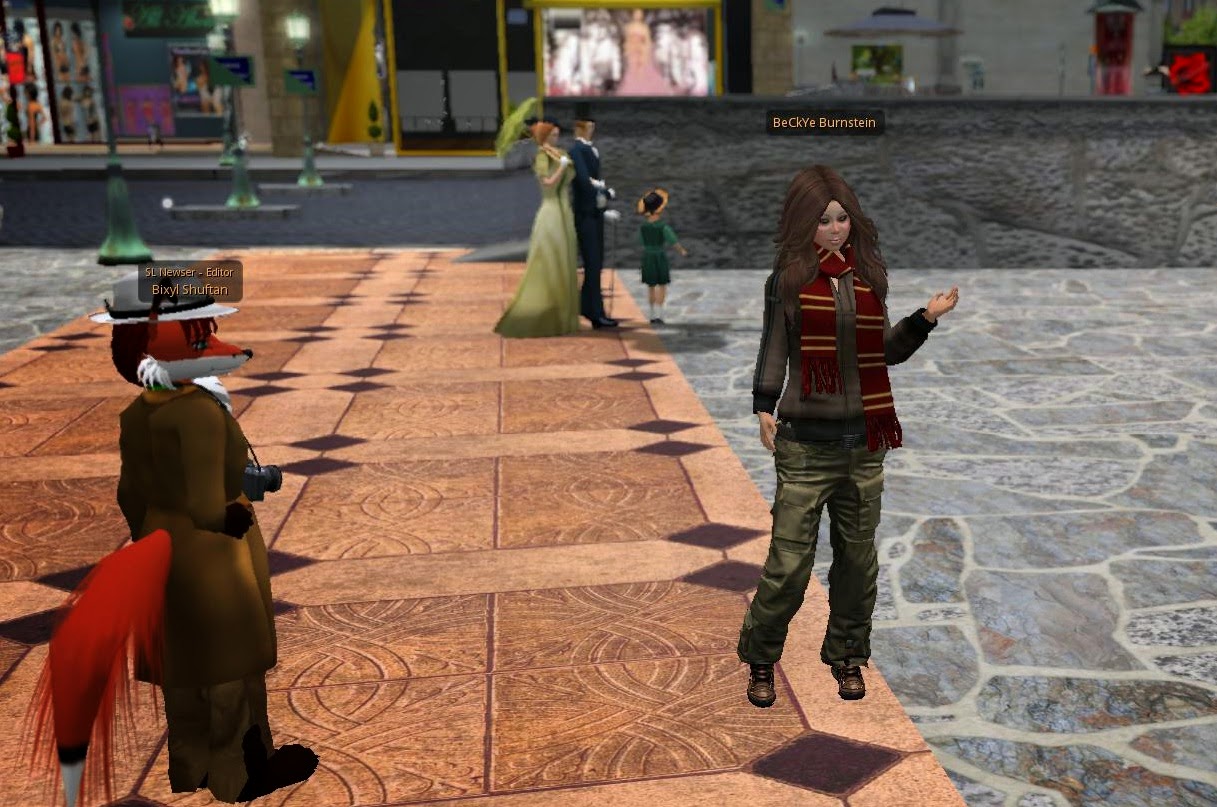 I ran into Beckey at the Paris 1900 sims. We chatted for a bit, then after a comment about the interesting things people can create in Second Life, she asked, "Wanna see something interesting?" She then began removing items of clothing, but instead of bare skin, what was revealed was a combination of bones, muscle tissue, and organs, "I have (a) full skeleton and most organs attached under my skin. I removed (my) mesh shirt so you can see. ... Last part I found was mesh boobs. I applied a flex/muscle texture to it. Thought you might like to see it. I would love the whole world to see it, but it's kinda hidden. *giggle* When people cam in too close and get their cam inside, I always get some IMs. *giggle*"

Beckye went on, "I started collecting organs about two years ago, adding stuff when I find it. The uterus was a great find. I started to add muscles to the bones too.....takes a while to adjust everything perfect." She told me she had gotten her start at a roleplay sim, Nor, "I  was a machina/cyborg, trying to become human. I got a skeleton and a brain, then a heart." She had been inspired by the movie "Bicentenial Man," and much like the movie's robot hero, her character was eventually considered human. She eventually left the roleplay, but kept on collecting organs. 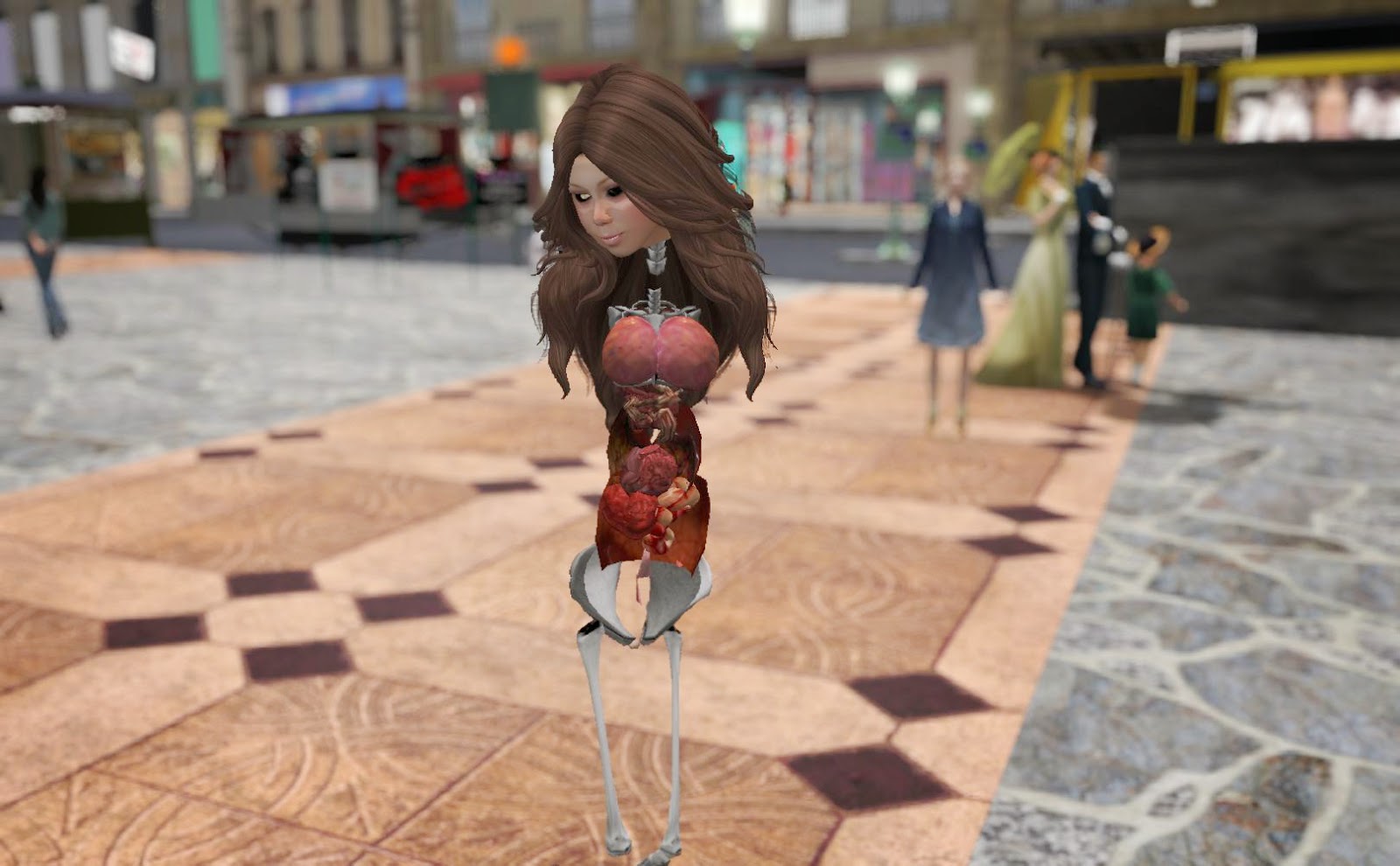 The organs themselves are worn all the time. But the arm bone and muscle visuals are not usually on as the skeletal hands are a bit large. She had yet to adjust their size down to normal, "Since I started Second Life five years ago, I always try to improve my avatar, make it look as realistic as can be, inside and out. As I like to say, "I logged in one day and felt empty inside.' Ha ha ha." When her see-through appearance is fully on, "no skin at all except for my face. If you cam under my hair, you ll see the skull. Camm deeper...you ll see a brain."

"Building this avatar made me learn some about anatomy. It's really fun to do. She also described some interesting incidents with the avatar, "One time, I was visitng Detroit Sims roleplay, as an observer. I was just walking around, minding my own, being a good observer. And one of the sims admin went totally out of character, stopped the RP and pointed out to everyone that I had organs and skeleton," Becky laughed, "was funny."

"Another time," Beckye described, "I was in a court trial in Nor, as a witness. During my time on the stand, I had to go pee, real bad. I couldn't hold it any longer, and I began to start peeing right there, in the court room. That was the highlight of the evening (laughter). ... Little thing called a 'Tinkler,' makes you need to pee once in a while. Adds to the whole bio thing." I chuckled, "Did it come with a bottle?" She answered, "No, but I can add a script to put inside drinks that would accelerate the pee cycle, and have it rezz a nice pee puddle. Also has some Restrained Life Viewer functions, but I don't use them." 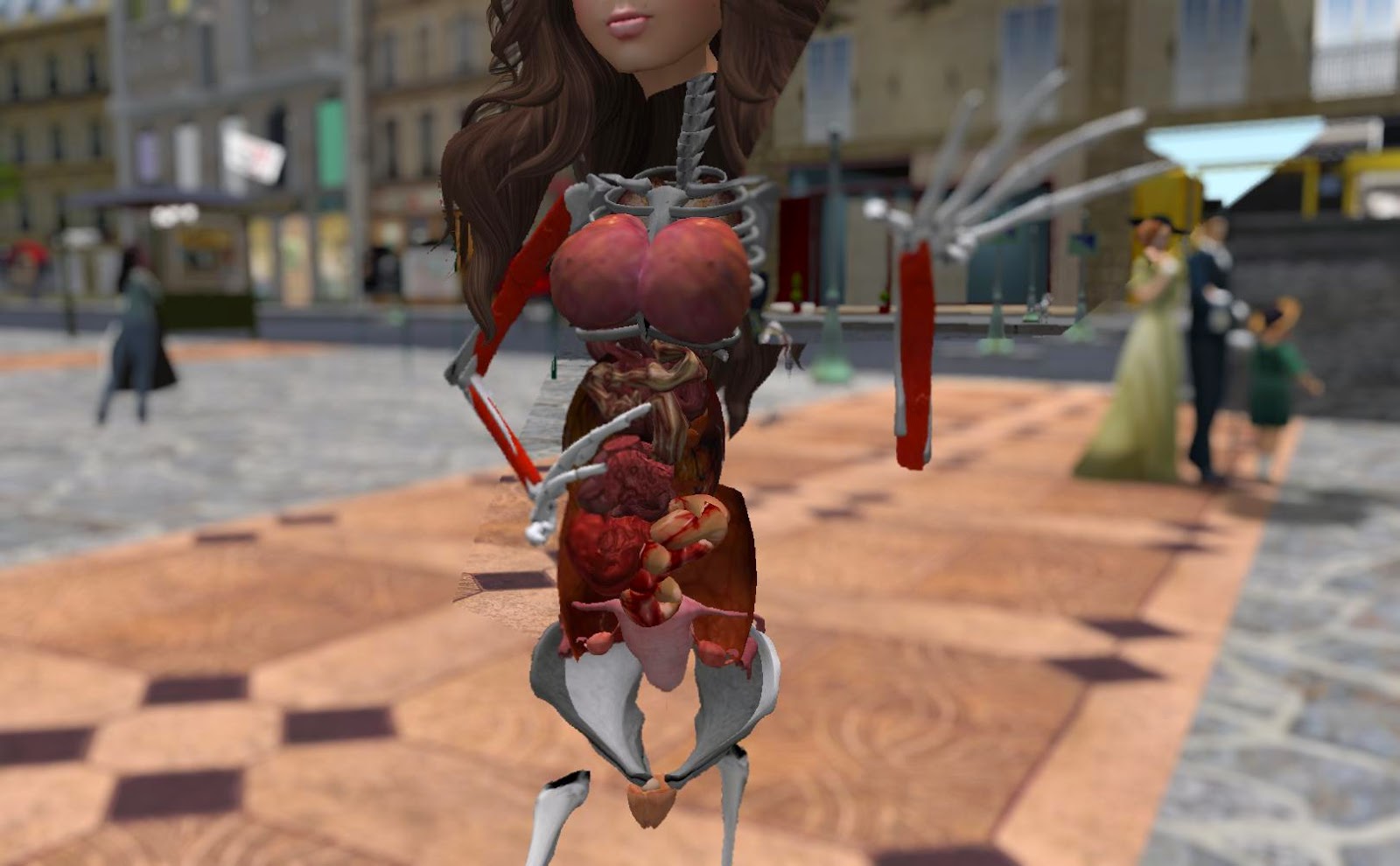 Beckye commented, "I have thought of making a HUD that would include all body functions, with animations, and organs react to all this. Can go from healthy/sick, bone fracture, realistic pregnancy,endless possibilities." She also thought of scripted hair that grew every day, "with a HUD to make a haircut, so you have to wait for long hair, etc. You could have a neglected look. Next think, I'm leading to build hair, and my partner will figure out scripts to make my folly come to life, before 2016 hopefully."

I asked Beckye what did her partner think or her body building. "At first, he didn't get it (laughter). I had to explain it to him, and he told me I was crazy. After explaining it again, he told me, 'there might be a way.' So, he'll have to figure that one out. Hee-hee. I know how scripts work, but I can't write them. Sometimes I find the logic of 'how to,' and he writes the codes. It's a blessing to have a scriptor as a friend. Most builders I know can't write complex scripts. All scriptors I know, they can't build prims (laughter). This is how we met, through building."

Becky says she might pause her building efforts to see what SL 2.0 has in store in regards to avatars with bodily functions, "I hope this is where they are going."

Besides her body building, Beckye is also into Second Life aviation, flying planes such as her personal 737 within Second Life.