If you're familiar with the Content Creator controversy that hit Second Life from 2013 to 2014, you've heard of Kylie Sabra who organized the United Content Creators of Second Life, the group that tried negotiating and talking to Linden Lab. This feat resulted in Second Life Newser choosing her as "Person of the Year: Runner-Up." But that's just one of a list of her accomplishments. From being the manager and set designer of the Rose Theater galleries to a clothing designer, she's made her mark across a number of fields on the Grid. Recently I had a chance to interview her. So we set a time and met at the Theater.

Bixyl Shuftan: "To begin with, how did you find out about Second Life?" 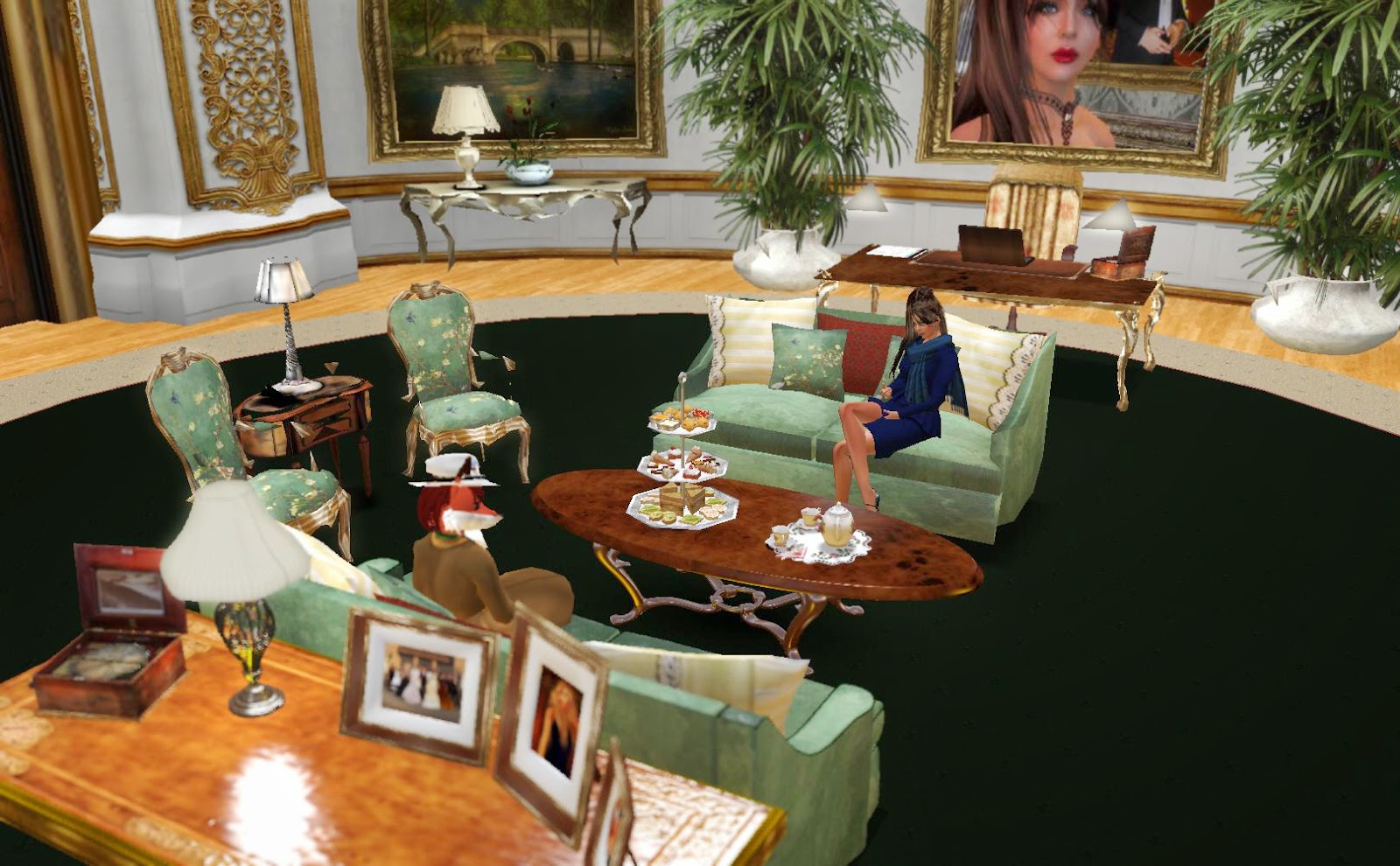 Kylie Sabra Angel (kylie.sabra): My husband saw me playing "Farmville," and rolled his eyes. "If you're going to'play', 'play' something cool." (laughter) He'd been on a couple of years before, but it did not set with him. That was five years ago this past October."

Bixyl Shuftan: "How were your first experiences here?"

Kylie Sabra Angel (kylie.sabra): "One day a man I met created a bird right before my eyes and it flew away. I was mesmerized and began building immediately. I built my first art gallery within 60 days and filled it with my work and began promoting. So it has always been creative. Don't get me wrong. Like most, I ventured first into the club scene, but it's just not me."

Bixyl Shuftan: *nods* "Your first art gallery? How did that one go?"

Kylie Sabra Angel (kylie.sabra): "It was awesome. It was a stepping stone. I drifted into roleplaying for about a year then. I'm a writer and roleplay was just a natural, but still the creative side won out. I leased a homestead and became enamored with creating incredible landscapes out of a postage stamp of sand. So my then second gallery was quite a undertaking on a quarter sim, and I began having guests artists and developing a reputation."

Bixyl Shuftan: "Sounds like you were quite busy. I take it the effort had very good results."

Kylie Sabra Angel (kylie.sabra): "It did. The gallery was well received. I'd met Kaya in 2010 when I was writing for Radar Magazine. He and the Rose were my first assignment and that was the first page in a long and ongoing saga."

Bixyl Shuftan: "Sounds interesting. How would you describe what happened next, for the readers?" 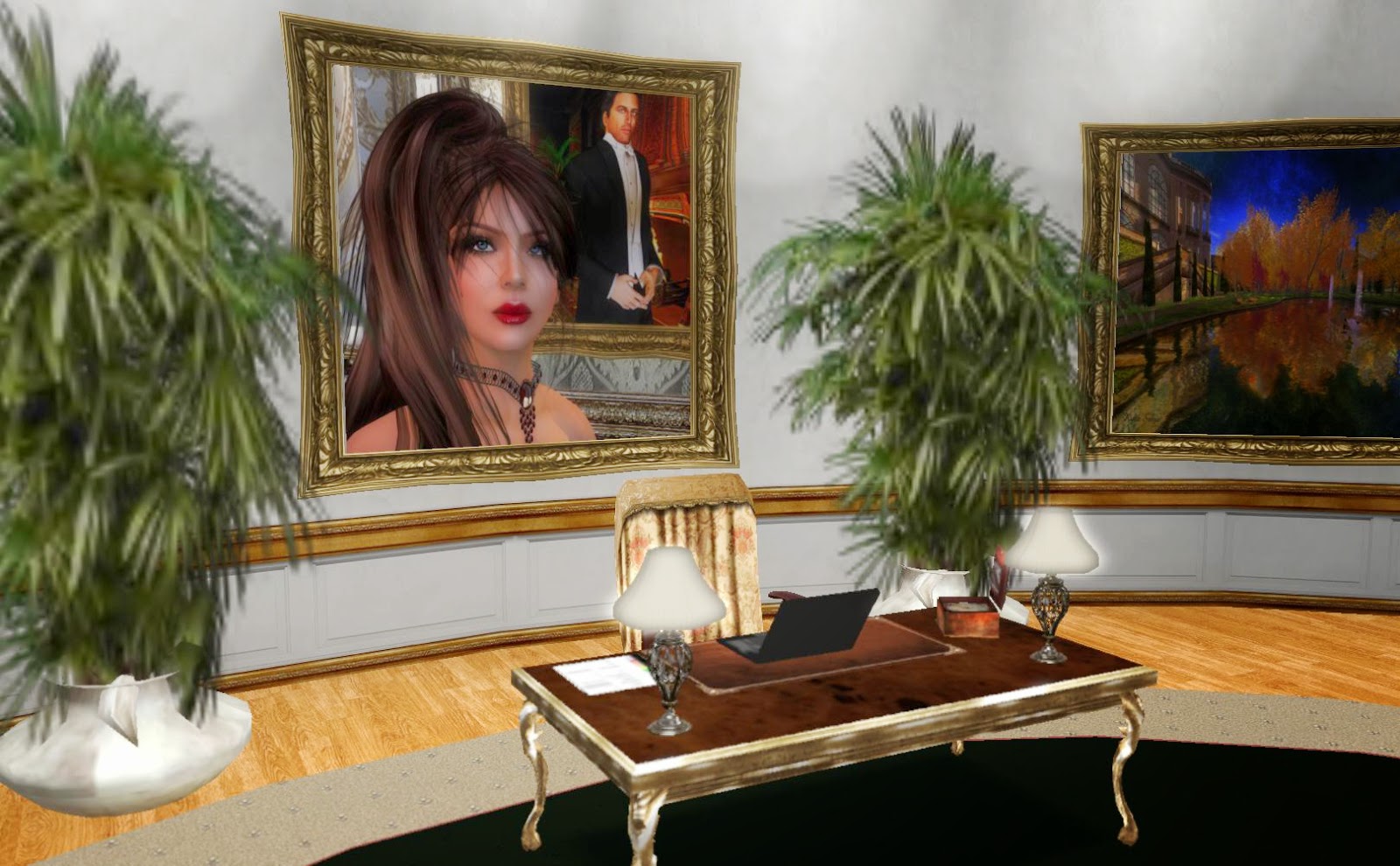 Kylie Sabra Angel (kylie.sabra): "I remained in roleplaying and worked on my gallery, but over the following year, met with Kaya on and off again. This place haunted me. In February 2011, he was giving me a tour of the then galleries. There were four at the time. He'd had a curator, but had not seen her for several months. Her picture still remained on the wall over her desk. Without even imagining it to be possible. I asked him if I could curate. (laughter) I can rather imagine him shrugging his shoulders as he said simply. 'Sure.' Soon four galleries became ten and with the new build they became and entity unto themselves-no longer an afterthought. He designed the layout that allowed them to flow and be together. I pillage it on occasion--as now with Molly Bloom's exhibition, but the lobby is hands off. (laughter) THAT is pure Kaya."

Bixyl Shuftan: *grins a bit at your chuckle* "Sounds like some interesting times, in a good way, continued to happen."

Kylie Sabra Angel (kylie.sabra): "They do. *points to the picture over my desk* "He's the perfect big brother. He has my back, looks over my shoulder, but never tries to control or smother. I have a great deal of respect for him."

Kylie Sabra Angel (kylie.sabra): "Did you want to spend some time talking about what's ahead?"

Bixyl Shuftan: Sure, "I was going to ask about some of the Rose Theater and Galleries best events and displays, in your opinion." 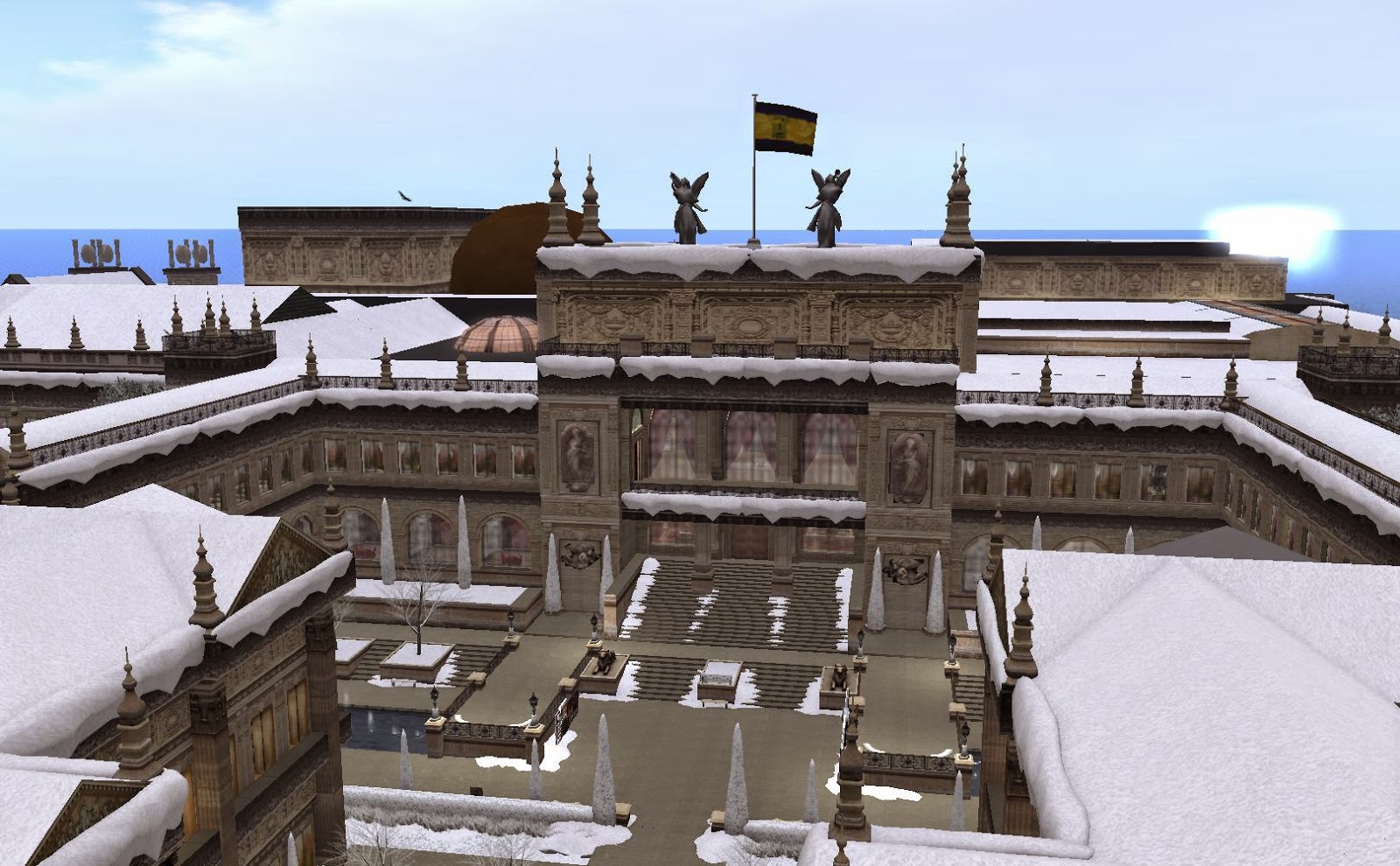 Kylie Sabra Angel (kylie.sabra): "As you know. the galleries are my babies, so I can best speak to them. I've had the pleasure of curating and building some incredible shows and not to shun any of our wonderful artists--there have been nearly 500 separate exhibitions over the past 4 years--but there are three that really stick out in my mind. The first one being TheaDee (now simply Thea), the second was 'Ride the Rose' for Gem Priez (sp), and the 3rd and current, is Molly Bloom's transfiguration of 2D art to 3D-characters literally stepping out of the art. All were beautiful, creative or simply fascinating."

Bixyl Shuftan: "500 separate exhibitions, that is a lot."

Kylie Sabra Angel (kylie.sabra): "It is a lot of exhibitions and there are times I wonder how I will make the next one unique, but then I get the artist's work and it just falls together."

Bixyl Shuftan: "So a natural talent for making it all work out?"

Kylie Sabra Angel (kylie.sabra) blushes. "I'm not what it is or where it comes from. I think it's just my passion."

Bixyl Shuftan: And besides the gallery, you're also known for your efforts in regards to the "Terms of Service" controversy that haunted Second Life for a number of months. How did you yourself find out about it, and what gave you the idea for the UCCSL?" 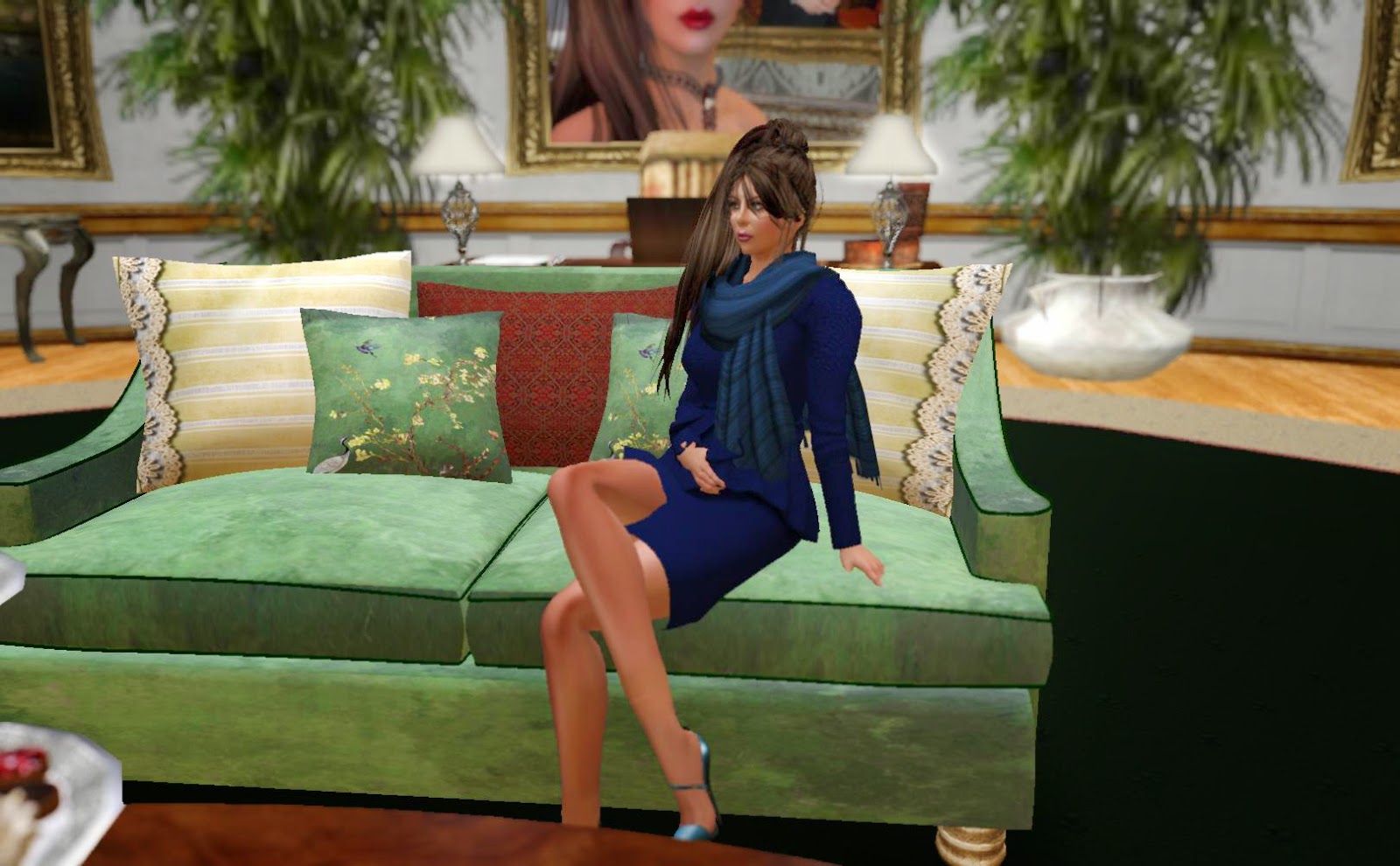 Kylie Sabra Angel (kylie.sabra): "Yes. I am so delighted that Ebbe came on board as CEO. I believe that Second Life will thrive under him. That was a tough and sometimes dark road on my path through Second Life, but I'm glad I traveled it and even more glad that it is over. I am now no longer affiliated in any way with the UCCSL group. I'm not in sync with the new management and felt it best to step down. As to how I found out, it was through Toysoldier Thor and Ernie Farstrider. We coordinated and I emceed (sp) one of the first public meetings and that was the dawn of the UCCSL. Later, the Rose Theatre was host to a folllow up meeting in which we featured a legal panel. The group helped to pull people together and bring focus to the key elements of the issue.

"There were many in SL that worked to bring this issue to life and they did so eloquently, I think UCCSL just quantified the people affected by the issue; it's members including some of the top-earning creators in Second Life."

Bixyl Shuftan: "It seemed that despite your efforts, Linden Lab's responses were few and far between, before Ebbe Linden's coming in as CEO. Did you have any further opinion as to why?"

Kylie Sabra Angel (kylie.sabra): Honestly? I felt the then CEO simply had no interest for the concerns of Second Life's citizen creators. It seemed he had an agenda and it did not include us. Seemed to me he was cutting off his nose to spite his face, tossing the baby with the bathwater and any number of such colloquialisms. It seemed they were more focused on trying to shut us up--making promises that were never delivered upon--than they were in resolving the problem.

"However, one of the issues I faced with the group was that I never once believed that griefing or gratuitous Linden bashing was the answer to problem and indeed was probably more deterrent and divisive than anything else.

Bixyl Shuftan: "After stepping down from leading the UCCSL, what have you been doing?"

Kylie Sabra Angel (kylie.sabra)'s face brightens. "I've taken my creative demon in a new direction. I'm designing fashion under the label 'Sabra Style.' The line pulls its inspiration from the lifestyle we live here at the Rose--one of refined elegance and beauty. I strive to create supremely wearable clothing, whether it be for the office, cocktails at an elegant club, ballgowns for those special events. I don't limit myself to those though. I also seek to create elegant casual clothing--the kind of clothes that set a woman a part. With one look a man knows he has met a woman who is confident in herself and her beauty--that she is intelligent, thoughtful, intriguing. I've always dressed this way in Second Life and one of the comments that I've often received is that, 'Kylie, you are clearly different. You know who you are with nothing to prove. It's refreshing. Or as my daddy would say--less eloquently--'If you give away the milk, who's going to buy the cow.' Sorry I grew up in Texas. (laughter)"

Bixyl Shuftan chuckles, "No problem, How has the clothing line been doing so far?"

Kylie Sabra Angel (kylie.sabra): "I'm doing very well. This is my first year and I was nominated for three Avi Choice Fashion Awards--Best New Designer, Best Formal Wear and Best Casual Wear. I was blown away." 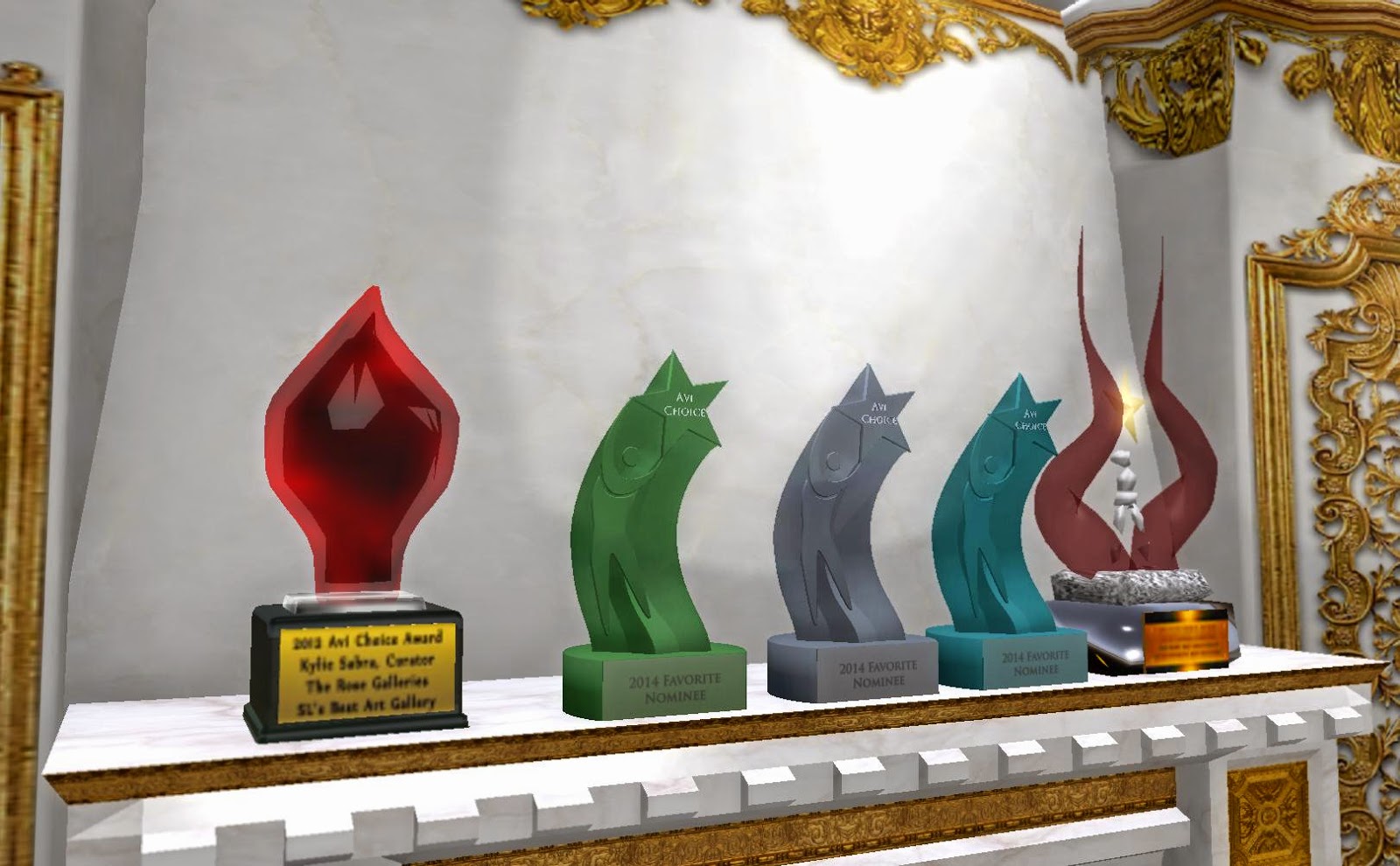 Bixyl Shuftan: "Oh yes, I see the awards on the shelf."

Kylie Sabra Angel (kylie.sabra): "I have a devoted and growing clientele. I'm a happy lady and look forward to growing more this year.

"I do have a surprise. I'm taking on something new this year, which will keep me far from all things political. (laughter) I'm going to start singing. The only reason I've not done it sooner is that I'm scared to freaking death. (laughter)"

Bixyl Shuftan: "Singing, that should be interesting." *grin*

Kylie Sabra Angel (kylie.sabra): "Well I promise I won't hit the stage until I'm ready. My partner in crime, Lisa Valentino, QAs my clothing and me! (laughter) She believes in the adage, 'Friends don't let friends sing badly.'"

Bixyl Shuftan chuckles "So what are your plans for this year, and beyond?"

Kylie Sabra Angel (kylie.sabra): "As far as beyond. . . I have the galleries, my clothing line and now singing . . . I can't think beyond all of that, but I'm always open to new adventures."

Bixyl Shuftan: "Sounds like you have quite a bit planned for the future, was there anything else you wanted to add?"

Kylie Sabra Angel (kylie.sabra) sets her tea down on the table, "I do. And I'm so sorry, but I need to rush to a family luncheon. We are hosting a lunch for our residents today. Thank you so very much."
[
Bixyl Shuftan: "welcome, and good luck."