Well friends, after 55 days of producing a video about the Sunweaver Community, here I am getting back to writing. Is it any wonder, why my first topic is communities?

I chanced to spot a destination called Free Spirit Farms, Hippy/Boho Community and my eyes lit up. Back in '69, I lived in a real one, called Drop City, Colorado. If anybody were qualified to compare the virtual versus real experience. this reporter could reply to Jimi Hendrix, "Yes, I AM EXPERIENCED". Learning of my latest adventure, Bixyl informed of some individuals that claimed to...err...have access to...had a connection to a virtual pill, said to be like a psychotropic "trip" experience. Since, as Bix said, sex, drugs and rock and roll was before his time, perhaps this old white rabbit could research it deeper, We'll include that experiment, later in the article.

The photo, to the left, is of Drop City, at the time I lived there. As we head to Free Spirit Farms, the kid in the back seat of my mind asks, "what can I expect to find there" to which the driver responds, "expect nothing in advance and you will find everything." We know, in advance, that it will not look the same as places we have seen, but a trained mind can see corresponding similarities and differences. Our inner art critic will study the sim as the collective form of the imaginations of the inhabitants.

The landing point of the sim is a large open building, which also serves for gatherings with DJs. There are signs to click for rules, info and joining the group. Large doors open in every direction. All the views look great, so we head towards the center of the sim, to establish a central landmark, from which other points can be referenced. Oddly enough, not far from the middle of the sims "ground zero", we found a drum circle. 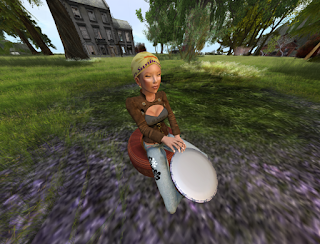 We know about drum circles and the benefits of using them. When you join one of these circles, even if just to clap hands and tap your toes, you, automatically receive several joyful benefits. The individuals are now members of a greater, synthetic life form, with synergistic energy and power, greater than the sum of their individual powers. Oneness is like having a backstage pass, that shows the doorman, "I'm with the Band". From decades in the music biz, we can guaranty, EVERYBODY likes getting a backstage pass. Next, because we all play to the same beat, our individual bodies begin to synchronize. As the drumbeats impact our solar plexus, we all share the same feelings and emotions. Within minutes, all the heartbeats become synchronized and beat as one. With a little more practice, even the minds begin to link up. A telepathic connection turns the circle into a living being, which has the power to be a conductor of it's individual members, turning a simple beat into a complex, orchestrated song.

OK, enough science, but does this have anything to do with the sim residents being "real hippies?"  Looking back, the vast majority of hippies did not join the movement for their own scientific, mental reasons. They were drawn in by a handful of thinkers, writers, poets and musicians. That small group was like a drum circle, that continues to grow, even into the virtual world. If there's a drum circle, in the middle of the island where you live, yeah, YOU MIGHT BE A HIPPY. Another advantage to sitting at the circle, we could see, on radar, near-by blips approaching. We met and befriended several people, learned about the community and even heard of their experiences in real-life hippy communes. 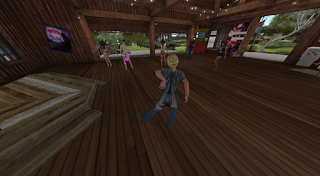 As a new group member, Sha gets a notice that a DJ is playing and gets there in time to meet some more locals and the DJ, Feather Fride. Feather sent a private IM and at one point, wrote a poem, dedicated to Sha's unique eyes. If you have ever zoomed in on Sha, when in human form, you know she does, in fact, have very unique eyes. We thanked him for the compliment. He asked forgiveness for being so intrusive with his cam, to which we replied, no prob, it shows you have the "seeker" quality.

On this visit, we were also checking out details of a rent house that became available. We found it a bit small and expensive for this old hippy's spare change budget, but members can also set home to the sim and there is a campground. Hippies don't mind if you change clothes outside.

Before becoming a member, there was a corner of the sim, with a barrier. As a member, we were now allowed in. This area is a hill, with a path winding to the top. From the objects (props) around the top, we see this is meant to be a spiritual place. 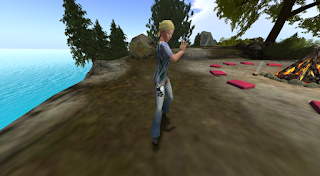 Near the top, there is a small devotional shrine and cushions. Top center, there is a large bondfire, surrounded by enough cushions for a large group meditation. Near by, up to 10 can practice Tai Chi, in sync. We found several other gathering spots on the sim. The ruins of an old building has a stage and seating, for music and theater performances. At the central pond, there is a dock, with lots of seats, where you can sit on the dock, so they say, watching time slip away.
There is some hierarchy within the membership, with a Ma and Pa at the top. This is a good form of government, for people that call themselves a family. Our visits have been peaceful filled with residents, who like the hippies of yore, doing their job to usher in the Aquarian Age of peace and enlightenment.

A psychotropic "trip" experience
The Editor, Bixyl, gave us two names to search and talk to, regarding a wearable object, called "Nip", which would cause your perceptions to be altered in the way that psychotropic substances effect them.  In our reckless youth, we called this "experimenting". As a veteran Lab Rat, I contacted one, whom I'll call here, Silver. We explained that our interest was not in it's use as an entertaining, fun buzz, but rather, we wanted to see if there was any usable science. In real-life, a chemical can have an effect on your thinking and lifestyle choices. The question is, can virtual world experiences have a lasting effect on your brain, especially since they arrive by the same nerve passages as real-life experiences follow? Picture this; a doctor tests you and, instead of pills, he gives you the URL of a product on the Marketplace. It is a healing ball, that you put in your SL home. Set the ball, using the doctors instructions and spend 15 minutes each day, as it fills your senses in delightful ways.
I asked Silver where a snoopy Newser Reporter could get a "Nip", to test...for science. My luck, he just gave me a free one. Said, if I needed more, he had a "connection".  To give this item a fair trial, it stayed on ice, until an optimum time and place were found.
In a real life "trip", all of the senses become amplified, including extra-sensory ones you didn't know you had. In the virtual world, we will be using only two of our senses, sight and sound. The experience will vary with users, but two will be felt by all. Everything seen and heard has a pronounced after image or echo. Motions are followed by comet tails and sounds have reverb. Everything seen, regardless of what it's made of, looks fluid and is breathing. Our personal favorite, we notice that pixels are not squares and every texture displays it's own tile geometry.
Now, late at night, on my home turf, we wear the Nip. 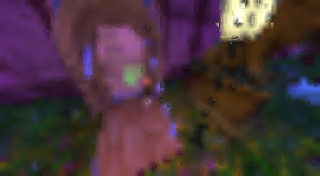 The device was kind enough to inform us, in chat, the trip only lasts 28 minutes. As pro lighting techs, we found the light show very enjoyable. An additional effect broke the screen into squares of shifting size. Instead of enhanced visions, Sha was so blind, she fell off the roof and stayed on the front porch for the rest of the trip. We were pleased to see, when the trip was over, all the lights returned to normal and control returned.
Pass or fail? Fails first, squares gotta go, replace with strobe light trails. It only used sight effects. Is there a way to add some echo or reverb to the sound?  On the plus side, I got to have fun and adventure with a toy that very few others will get to play with. I also see it as an art media, with potential developments and possible therapeutic uses. To it's creator, I say, good start. I would be happy to beta test any future upgrades.
Old hippies never die. They just go up in smoke.
"Sha"

Editor's note: the Second Life Newser does not condone or encourage the use of drugs for other than medical reasons.
Posted by Bixyl Shuftan at 6:00 AM