Last weekend was the Relaystock, one of the more popular of the events in the middle of the Relay for Life season. Although organized by the Relay Rockers, they opened the event to multiple teams where some make thousands of Linden dollars more. I recently talked to the woman who organized the event: Arizona Ballinger-Whiplash (Arizona Ballinger). Although sometimes overshadowed by her noted partner, Trader Whiplash, Arizona can and has gotten much done in her own right. 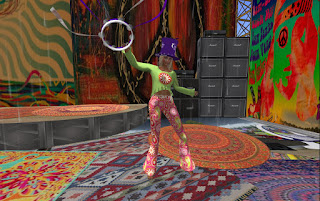 Asking her how she found out about Second Life, her answer was, "Wow...that was a long time ago.   I happened to see an article in old online publication about virtual worlds, I forget the name of the publication now, but they mentioned Second Life.  I thought I would give it a try."

I then asked Arizona how her first days inworld went. She answered, "Probably like most (laughter). Stumbling around, walking into walls. One shoe on, one off, hair drawn down in my face (cause there was no attached hair then) and thinking I was the best looking avatar!  I shudder at that thought now  .. ha ha!

And how did she find out about the Relay for Life? Her answer was, "I found out about Relay when I wandered into LEGENDS Classic Rock club one day and met Trader.   The Relay Rockers were holding a dance event I think it was.  I have been on the Rockers since and have not looked back. That was ten years ago."

How had the Relay Rockers team and the Relay as a whole changed over the past ten years? Arizona answered, "Both have grown a lot.  Each year Relay has something new and exciting.  Each year there is more news about research findings.   It is so great to know what we do makes a difference."

Arizona had to take a short break to care of something, but was soon back. After I asked when she started helping to plan events for her team, she told me, "I started helping with event planning for the Rockers right away, and I was team captain  in 2008 and 2009, and again this year 2017." Was it a difficult job? Arizona answered, "You know, (laughter), it really isn't.   We work as a well oiled machine.  Our five or six coremembers know what it takes and how to do it. They are dedicated, efficient, and so amazing.  You ask and they say 'Yes.'  They come up with their own events and run with it.  Always something new each year.. When we go to new communities to bring Relay to them, we help them organize, but they run the event. They know their people the best.  And the next year they are more self sufficient in organizing the event for the team." 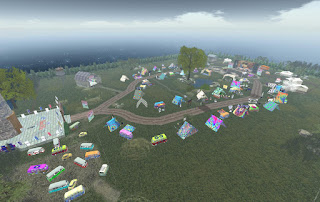 With this weekend's event being the Relaystock, I asked Arizona how it began.  She answered, "It started in 2014.  The Relay Rockers were still doing their CelebrateRemember Fight Back (CRFB) Top DJ Competition. The previous year we had held our finals at Halfway There event.  In 2014, the Halfway There event was a bit different and we wanted to do the CRFB Finals in a large team atmosphere.   We tossed around ideas and RelayStock was born.  Although the CRFB DJ Competition is no longer active, RelayStock continues to grow each year. We wanted to find a way to thank teams for all their support of Relay Rocker events, so we kept RelayStock going and are now finishing the 4th year."

I then asked her this being a Woodstock tribute, were there baby boomers looking back with fond memories and some younger people getting something of a music history lesson?" Arizona's answer was "Oh most definitely....and some enjoying the tunes they grew up listening to because their parents played it all the time (laughter)." 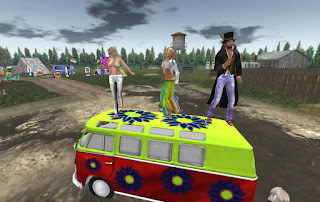 My next question concerned the clothes the avatars were wearing. Was there a difference between older and younger residents? She told me, "I think the older residents go more for the authentic bo-ho style that wasprevalent at Woodstock, where as younger residents wear the tye-dye.  But everyone has their own style to bring to RelayStock and it all works."

And what did she think stood out of any particular outfits, or impromptu events, at any of the Relaystocks? Airzona had to think on that, "Oh gosh... that is a tough one.  I think Santa dancing in the mud in 2015 was pretty funny.  As always Fuzz and 'The Hair' taking part. Cars and bikes going around before it opens is exciting, always some funthings happening.  I love the opening and am sad at the closing. Otter (Rowena Dubrovna) mud dancing is good for a laugh. He sinks to his little otter waist (laughter)."

After the Relaystock, there was still weeks until the Relay Walk. What events was she looking forward to in the time in between? Her answer was,  "For the Relay Rockers, we have a big Bid Me Bald May 17 with BioBreeds creator, Ozzie Drucker, he does one every year for us. Coming in June we have our HardCore For The Cure at various heavy metal and alternative music clubs, and we have the Twisted Hunts Summer Faire running for the month in support of the Rockers.   The Home and Garden Expo is one event I look forward to every year as well as the Medieval Faire by Unmasking A Cure, and the Inspired Dreamwalkers have a fun grid wide event Destination Hunt coming up that sounds like a lot of fun!   There are many on the Event Boards that I look forward to attending as well." 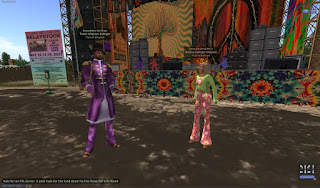 Getting close to the end, I asked what she foresaw for the future of the Relay for Life in Second Life? Would there will be a Relay for Life in Sansar? Arizona told me, "I think the Relay in Second Life is still going strong and will be around for a few years yet to come.   With Sansar, I can't really answer that.  It is very different than Second Life. Sansar's focus is  on the Creator and the virtual spaces are self contained. But I am sure if the American Cancer Society sees it as a viable platform, then they will have a presence in there."

Arizona, and her partner Trader, will continue to be a force in the Relay for Life for quite some time.