Interview with Trader Whiplash At The RelayStock

Trader Whiplash-Ballinger and I met at the Relaystock.  There was an event happening so we went to the back.  I also got a chance to meet with Arizona Ballinger-Whiplash, Trader's partner. 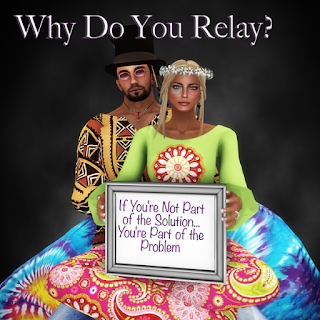 My first question was how Trader got involved with the Relay. He answered, "I am a survivor.. In 2005 I was in Second Life and heard about a new charity event forming in world.  Relay For Life.   Nuala Maracas, this years RFL Event Chair, Alliez Mysterio and I decided we wanted to take part in it.  We formed a small team and fundraised at our club, La Vie En Rose in Rue dAlliez." said Trader.

My second question. one which made Trader laugh, was where the idea of "Bid Me Bald" come from. "I have leukemia," he answered, "In 2007 I went through six months of chemotherapy to treat it.  I would spend my nights here in Second Life with Nuala, Arizona and a group of friends.  Two of them, the late Catt Gable and Madelyn Majestic, said they would go bald if I lost my hair.  I said 'Wait, before you do that let's find a way to make it an event.' We tossed the idea around and came up with the idea of asking volunteers to sacrifice their hair in return for donations.   We decided $20 a day - L$5000 was a good amount.  We started it in the 2008 Season as a team event.  This is the 10th Anniversary of the event."

I asked him how he describes the T-1 Radio and his DJ style. He thought about his answer a little, "Let me start.  When I first came to Second Life, the music scene was primarily Electro Club music.  Everywhere you went.  I was given an opportunity to DJ on Radio dAlliez and decided to do Classic Rock as a fresh sound here. I love music. I grew up when 60s music was brand new.  I play guitar and studied music when I was younger.  I like to blend my sets.  Many DJs just play music.  From a hard rocking acid group, to a ballad, to a slow blues song, to pop.  There is no cohesiveness, no transitions or segues.  I like to find songs that segue from one to the other, even if the tempo or style changes. I want it smooth. If a song ends with a piano in  I look for the next song to compliment it.  Maybe fade in in a complimentary key or similar beat."

"He is a fantastic DJ." said Arizona with a smile. 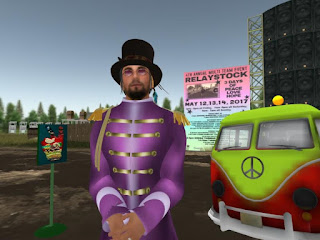 Trader hates it when the DJ drops them off a cliff between songs.  He spends an hour or more queing songs as he builds a set list.  Trader also like to share facts about the music or artist, saying, "I want T1 to be like a terrestrial station.  I grew up with the legendary DJs from WMCA, WABC ad WNEW-FM and i want our station to live up to that legacy."

Trader has many favorite moments.  But he can remember the anticipation of Relay weekend.  "Every year is special," said Trader, "watching the community get so excited.  My highlights though, I guess 2014 when we relayed in Alliez's memory and took Purple Level, again in 2014 seeing us raise $415,000."

Trader remembers the closing ceremony in 2013 when they broke convio as they passed 2 million dollars. "Of course being inducted into the Relay hall of honor with Nuala and T1Radio was a humbling moment I will never forget," said Trader, "And of course walking the track during the Survivor Lap with Nuala and Arizona."

I asked Trader about the challenges. "We all face challenges.  Teams big and small are faced with challenges. How do we move to the next level? How do we avoid fatiguing our donors?  Trying to keep our teammates and community from burning out.  But its no different than the challenges we all face in life.  As a survivor the challenge of living with leukemia taught me a lot about facing challenges." said Trader. "But when it gets tough I have Nuala, I have Arizona and I have the Relay comnmunity to lean on."

On that note, I took a picture of Trader in the front of RelayStock.  I have a feeling that I have a lot to learn when it comes to Relay.