Back to Normal: A Look Back At The "Bid Me Human" and "Platinum Challenge" 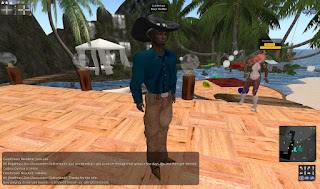 On Monday June 19 started a period of a little more than two weeks when I wasn't quite myself. For the latest round of "Bid Me" events of my community's Relay for Life team, the Sunbeamers, I had volunteered for a "Bid Me Human." Although I had changed briefly to a human avatar for short periods of time over the years, I hadn't volunteered to be one for a "Bid Me" event since the days of the Passionate Redheads in May 2011. The result of that was me being stuck in the look for a month. This time, the Sunbeamer chief ruled it was for two weeks, although it would turn out to be nine days, with a catch. 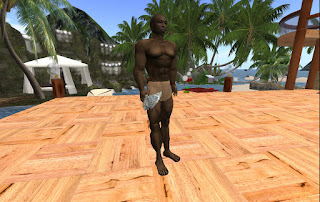 Besides the shorter time involved, it didn't affect me so much this time as the slightly awkward feeling I had at the clubs at the start of last time. I was still being asked to dance. I was still able to dress in theme much of the time, such for the "Video Game" party in which I went as a "Rust" player (picture to the left). And the reaction I got from others, furry and human alike, was mostly positive. There were a couple exceptions. One was one girl who felt, "That avatar is not you." The other was an incident when a friend invited me over to a country music club whose attendance was all human except possibly a couple neko avatars. Someone there, seeing my avatar's black appearance, made some remark about an "interracial sim."

Considering in real life, my appearance is white, I once had a black boss, and one church in the area has it's sign in both English and Korean, if that was some kind of joke, I missed the point entirely. I only spent a short time in the place before events called me elsewhere, so I didn't see any immediate response. I was later told by the person who invited me that the guy who made the remark had been told by the club owner not to do that again if he wanted to be able to keep coming over.

Then on Sunday June 25 came another development, the Sunbeamers reaching Platinum Rank in their fundraiseing total. Earlier, the team's chances of hitting the next level after Gold were iffy, so I had told team leader Rita Mariner, and others, that if the team made Platinum, I'd go female for a week. That got a chuckle of of Rita, and made it part of her next announcement to the group.

Males going about as girls in Second Life can be a touchy subject, especially with occasional stories of "catfishing." So I almost never changed to one, or rather deliberately as the jokes about glitches and "ruthing" go, and never went about in public as one, doing so only rarely  to show a girl in private what a certain avatar would look like, or a couple certain pictures for articles. I even wrote about the subject once in response to Becky Shamen's article , saying the "dos" and "don'ts" about it could be a little complicated with gray areas that appear different hues to different people. But an enormous amount of money going to charity from it, to me that seemed like a good enough reason. 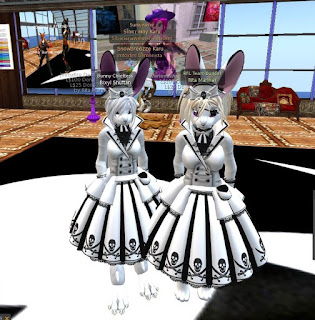 I had thought the Sunnies had a fair chance of reaching the goal, so an idea came to me: go as Rita's double. I saw this as a playful poke in the ribs, though as some who prefer furry avatars take their unique appearance seriously and react badly to perceived "copying," I talked to a few people first to make sure Rita wouldn't freak. It turned out planning ahead was a good idea as Cynthia Farshore and Shockwave Yareach's steampunk land and air racing event was the most successful event the Sunbeamers ever had. So yours truly had to own up, Rita saying she was expecting to see my new look at the Cutlass party Wednesday June 28. So I got a white kani female, found a white hairpiece for it (ironically the style was also called a "Rita"), found a couple smaller bunny feet that resembled the catlike ones Rita had, though mine had bigger claws. As for the dress, fortunately finding that wasn't hard as Rita had once told me and others during a party what brand it was. One friend helped by giving me a title in her group, "Bunny Chieftess." So on Wednesday night, I dropped in and while everyone else was still rezzing, and presumably I was to them, I walked right up to Rita. After the usual "Hey Bixyl," there was silence followed by "whoah" and laughter. Rita was among those laughing, telling me I did a great job, "Good going Bixyl, you got me," and we both posed for a picture for a group announcement for the community. 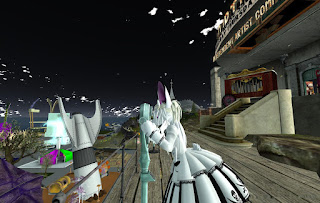 So after that, the reaction was almost entirely positive. One friend pretended to be upset I wasn't trying to do a tribute to her appearance. As she was busty, I joked that I'd get a backache just looking at my avatar (contrary to the opinion of some, not all males go ga-ga at the sight of large breasts, and some can find sympathy for the back pain and other challenges of well-endowed women). But another reason was I wasn't as good a designer and fashionista as she was. Someone thought I could have done a slightly more realistic job on the feet, but considering I was trying to get as close to Rita's look as possible it was pretty good. To those who don't know Rita, she has something of an act of being an aggressive alpha doe bunny with an attraction for other girls' "booty," though she's always careful only to tease those she knows. I'd occasionally imitate her in chat as a joke, which got a few chuckles. Going about at events outside the Sunweaver and Angel areas, there were a few "Ms. Shuftan" comments, but no one gave me a hard time. At the Second Life Birthday, almost no one spoke a word about it. 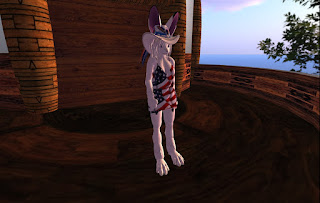 Someone did joke that I'd be enjoying the "look from behind." In short, I didn't get the same feeling from looking at the avie as other female avatars, maybe because it was supposed to be "me." I had wondered a little if some guys would make a pass at me, but that never happened. What did happen was there were several girls who suggested I could stay in that form, probably as a joke ... probably. I did still end up getting dances from a few girls. I guess they knew this was all in the name of fun. And I was openly saying this was no big deal, "I can go without peeing standing up for a week." For the Independence Day party at the Happy Vixen, I even got her a dress from a Relay shopping event for a one time use. The following day would be the last for the "Rita clone," at least for a long, long time. 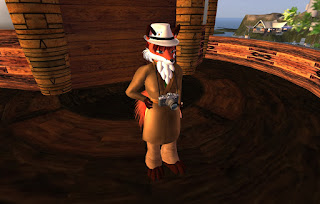 So now, back to my normal foxy self. Though I would still occasionally change looks, such as the skunkboy for the "Black and White" event at Cutlass a couple days later, I was sticking with being furry and male. But already, I have people asking what will I do for next Relay season when the Sunnies hit Platinum again. In short, I don't know yet. But there's a year to think about it. And in any event, it was, different, going about in the other form. But I won't be doing it again, at least not without another enormous amount of money going to charity.