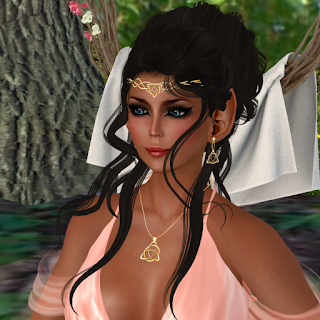 Gem Sunkiller and I met at the Relay for Life sims making up the track for this year's Relay Weekend.  My first question was about Gem being a part of the Relay. "Oh...that is a very long story," she answered, "I'll try to condense it.  In 2011 I lost my mother to metastatic colon cancer.  I found myself on the RFL track that Relay weekend in the wee hours of the morning.  The Event Chair at the time, MamaP Beerbaum walked with me for a bit, she both comforted and invited me to be a part of Relay For Life." said Gem.  "Jumped in with both feet in 2012, forming Team Shadow with SL Family and Friends."

Gem had been the captain of Team Shadow and had served in a variety of positions on the committee.  Gem helped with Outreach this year. She chuckled, "You might call me an unofficial cheerleader for Relay in SL." Her Relay team, Team Shadow, has around 30 people from a variety of communities on second Life.  They have recently added several new members.

When I asked Gem what her hope and goal are, she has this to say.  "My hope for Team Shadow, beyond the prayer that we are not needed next year because a cure has been found, I hope we Relay the right way, for the right reasons.  It's our desire to help other Relayers reach their goals.  As far as goals. Relay Goal is to finish the fight."

The biggest event of the year for Team Shadow varied year to year.  This year, they hosted a 12 hour "Country for a Cure" event that featured DJ's from five teams.  It was successful beyond their expectation, raising over 140,000 Linden dollars.  They hope to replicate that success for Making Strides and again next Relay season. "Outreach is one of my favorite things." said Gem.

Deafllegacy
Posted by Bixyl Shuftan at 6:00 AM