Resident from Puerto Rico Back Online Two Months After Hurricane

This year's hurricane season was a destructive one. Hurricane Harvey would affect a number of residents when it slammed into Texas and Louisiana in late August. But this would not be the only hurricane to wreck havoc on Americans. On September 20, Hurricane Maria slammed into the territory of Puerto Rico, which had already suffered damage from Hurricane Irma a couple weeks earlier. The result was devastating. Officially, the number of people who were killed by the storm is 55, although there are suggestions the death toll was much higher. For the power grid, which was already in bad shape, the storm was the finishing blow. Practically the entire island lost power, with estimates that some parts could be without electricity for as long as six months. When it turned out that a company contracted to rebuild the power grid had only two full-time workers, the move to cancel it added to delays. 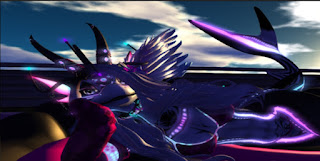 For Second Life resident Serenity Stahlwalkur (AyameAkemiSakura Resident), the disaster was personal as she herself lives in Puerto Rico. Seeing she was online after weeks, I contacted her, and she and I talked about what had happened, "My home flooded ... over 5 feet of water. I was asleep when it was filling, 3 feet, almost drowned. ... Ihad to sleep in a high chair 'till (the) water drained at 5 AM. That was when the National Guard came." Once she could get back to her house, "me and Mom cleaned the place and salvaged what we could." She blamed the flooding on city government, "was the mayor's fault that the sections were flooded. He didn't clean the gutters or the channels before the storm. ... for the water to flow down to the sea. It deviated to the urban area, taking bridges and a few homes and cars with it ... plus the storm surge pushing salt water. ... They had to open the dam's doors and it flooded the 5th, 6th, and 7th sections."

"Overall, been bad here. ... broken trees, fences, houses, collapsed power lines, power poles on the (ground) broken. ... Mentally I'm still stressed out, had a few accidents. ... I cracked and fractured both of my ankles cleaning the devastated back yard. ... Plus one of my pups was run over by a car. She survived, but badly injured." When I asked how many stores and businesses remained open, Serenity answered, "None, the stores were damaged and flooded, between 6 and 7 feet of water." She and her neighbors had gotten supplies at "the National Emergency Center, and the Army convoys came to give water and food." The first stores and businesses nearby would open "a few weeks after. Power came back the 20th of November," with Internet shortly afterwards, and running water about a month ago. But power, and her Internet connection, are still less than reliable. More needs to be done "to stable the communications and net," as well as more cleaning up.

Serenity stated it was about a month before she had gotten more or less used to life without the Internet, "though as for power, I was going nuts. The dark nights were too depressing." Of how the storms, damage, and long outage will change things for the long term, she felt, "This hurricane changed everyone, some for the good, some for the bad." Some would leave the island and move to the mainland United States. Of her plans in Second Life now that she's back, "Well, my plan is go back to my old life (here) and start over, a new chapter."