DJ Geerkil And The "Dragon Crew" 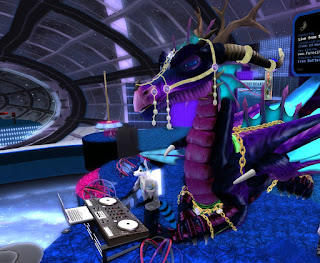 One of the more unique acts of the Happy Vixen beach club and Club Zero Gravity is DJ Geerkil and his "Dragon Crew." While there are plenty of DJs across Second Life, Geerkil Ziskey is unique that his avatar is that of a dragon. More recently, he's become the most visible part of what's known as the "Dragon Crew, which also includes his "co DJ" JB Raccoon, and often LS Raccoon, whom is often a hostess for her two friends.

DJ Geerkil, who pronounces the name "Gurrkel," first came to Second Life in May 2006, and has been DJing in Second Life for quite some time. For years, like most other DJs Geerkil just played music, explaining that when working alone he doesn't have much to say. Then in Spring of this year, JB Raccoon and LS Racoon first came to Second Life, April and May respectively. They are real-life friends of Geerkil, and had found out about the virtual world through him. At the time, Geerkil was working with someone named Dirty Dawg. "They did the Saturday show together and I would join them in Discord (a text and voice chat service)," JB told me, "but stay silent when they went on the air, until I got caught not knowing we were on the air (laughter)."

But sometime around late July or early August, Dirty Dawg left due to an issue. "JB was the only one who would chat with me (on Discord)," Geerkil stated, saying he talked JB into joining him on the air during his show. And the two of them just clicked, or as Geerkil put it, "the BS just started to spring out." On occasion, someone else would join in, "but JB was the one who kept showing up." Geerkil calls JB the brains behind the show, and credits him for the reason the show is what it's become, though gives credit to Dirty Dawg for helping out at the start. 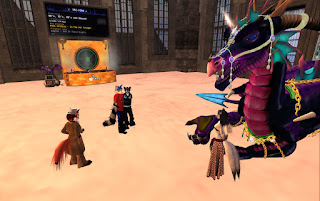 Geerkil, JB, and LS invited me to listen in on their chatter through a program called "Teamspeak." Of his being a DJ, the dragon remarked, "Music is my life. ... Music can change the mood, enrich the soul." Geerkil doesn't really sing, though on occasion will end up singing to his music. He says he was fond of the "Monkeys" when young, saying of one of the band, "He was good looking as a young man, but he got old and turned slam ugly, like me." He says he has about two terrabytes of music in his computer.

Most of the time, Geerkyl is in his large Seawolf dragon avatar, although on uncommon occasions will be in an anthro dragon form or other avie. Because of his size, when DJing at the Happy Vixen, he does so from just outside the wooden deck, laying on the sand. He calls Club Zero Gravity his favorite location as he can sit behind the DJ stand. "I had the impression ... designed with Seawolf dragons in mind," he stated, saying it "popped my bubble" when that wasn't exactly the case. 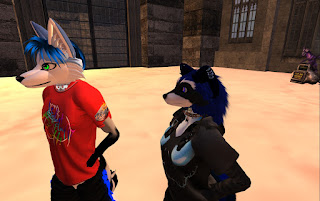 JB Raccoon as his name suggests does have an anthro raccoon avatar. But he also appears in an avatar that looks more anthro husky with a raccoon's tail. LS describes it, and hers, as half raccoon, half wolf. He told me one reason for his online persona is that he once gave out what he called his home location on a Google map that led to a tree. LS Raccoon, described as a "taker of food," does not usually say much during the show, but instead as a club hostess she gives group announcements of the Dragon Crew's events in club groups and group chats, and greets people as they enter. When not at events, she is often playing games with friends, or just chatting with them.  She hosts for Geerkil and JB at Club Zero Gravity. At their Tuesday set at the Happy Vixen, the task of hosting is left to Kitacella whom had the job first. Geerkil feels she does a great job, and is happy with her performance. 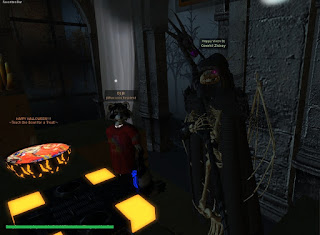 The name of the team the Newser uses for the purpose of this article, "The Dragon Team," comes from Nydia Tungsten, the owner of the Happy Vixen. Geerkil and JB refer to it as "The Epic Failure Show," the dragon describing it as, "Those idiots get on the air, and they do the stupidest BS." He openly described his sense of humor as "warped," and in the banter between he and JB, the dragon describes the raccoon/husky as his "seat cushion." There's sometimes a few poop jokes by the dragon in the between the songs banter, Geerkil saying he can't pin down why he finds them funny, he just does. When saying he sometimes trains DJs, "It's something I do, do. ... Did I just say doo-doo?" We went on to say in younger days, he would have his kids do "poo patrol" in his backyard, "and now I have to do it myself." 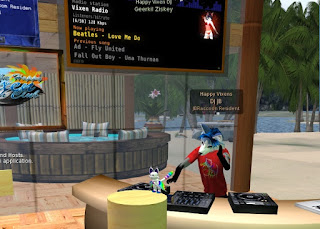 There's also a few jokes about women and sex, Geerkil admitting it can sound like "barefoot and pregnant" to those with sensitive temperaments, "probably why I don't have a girlfriend." In one of the few times he changed from his dragon avatar, he had on something tiny and cute that could fit in someone's hand. He then offered his services as a "cleavage pet," saying his tiny dragon form could help keep a girl's bosom warm if he was tucked in. However he does not condone outright sexism, criticizing men in position of power in the news whom were exposed as bullying women in sexual manners, "I am very much against sexual harassment ... unless I am the one doing the harassing."

When I asked for examples of their craziest times, Geerkil laughed and told me it might be hard to pin down one. He then stated, "When JB was wearing his blue underwear, without his pants." JB brought up, "There was that one time you lit my a*s up," saying the dragon had caught his tail on fire. Geerkil responded, "That was an accident, sort of. ... I don't remember." "A memory lapse of convenience is what I call it." There could also be technical issues, Geerkil saying, "that's why we call ourselves the Epic Failure Show." LS has this to say about Geerkil and JB's act, "They're hilarious as always. They do a wonderful show, always putting effort into making sure people have a good time and to draw more in. (The) events are very much as fun as the skits, and we all enjoy having a good time as do others." 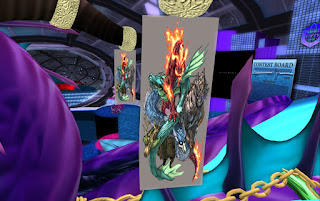 One of the last questions I asked Geerkil was about how he decorates his dragon avatar, which wears gold chains and has charms hanging from it's horns. Geerkil says he originally got the idea as dragons are attracted to gold, and it was originally for his anthro dragon form, getting a golden headdress for it. But it worked so well, he enlarged it and had it fit his full-sized form. He then decided to go further, "Why not get a custom outfit, something no one else has?" Since he liked gold chains, he had some wrapped around the avatar, with green cloth underneath in places, "to avoid chaffing my scales." The charms on his horns were tailor made, the design made by someone Geerkil offered to pay. He was so pleased with the results, he "overpaid" the builder.

The schedule of the Dragon Crew will be changing soon. When the Happy Vixen shuffled it's Thursday events from 6 to 8 PM and 8-10 PM to 4-6 PM and 6-8PM, they were offered a second set in the 6-8PM timeslot. Geerkil told me their Saturday schedule is likely to change. Of his real life, there has been some trouble as Geerkil is on insulin and other medication, of which he had trouble affording. Fortunately, he managed to get some help with it.

Be sure to catch the Dragon Crew at the Happy Vixen from 4-6 PM Tuesdays and 6-8PM Thursdays, and check the schedule at Club Zero Gravity for their appearances.