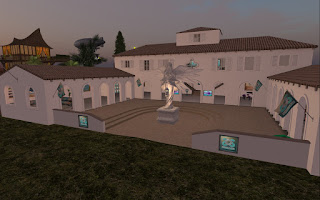 Suicide is a major cause of death, with close to a million cases worldwide and over forty thousand in America every year, and it is believed to be underreported. It has been on the increase in places, up 24% in the past 15 years in America. While it has been on the decrease in Russia recently, it is still very high at 15.6 cases per 100,000 people and has a teen rate three times the world average. Fortunately, there are numerous organization and groups offering help. In Second Life, there is one group created to help people or friends of people whom had attempted it, those or friends of those at risk, or friends and family of those who succeeded and need help coming to terms: Survivors of Suicide. As time went on, the group has gone on to help people with depression in general, though suicide prevention remains a focus. 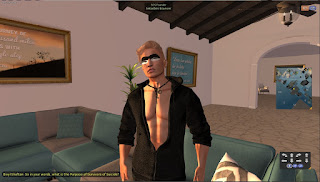 I was recently invited by one of the staff of Survivors of Suicide, Sebastien Bouevier, to drop by their location at the Schoomere sim and hear him tell about the group. Sebastien described the purpose of the group as, "to spread awareness and help prevent suicide, but we also serve as a peer support group, helping our members though the good and the bad times." When I asked who founded the group and when, he answered, "Krissy Sinclair, our founder, started the group over six years ago. I've been running the group for two years now." When I asked what inspired Krissy to start the group, he answered, "Im not 100% sure, but at that time there wasn't any active support groups for mental health in Second Life. ... I've only been here four years, so I can't say how the group was before I joined, but it has been a very helpful tool to stay well." 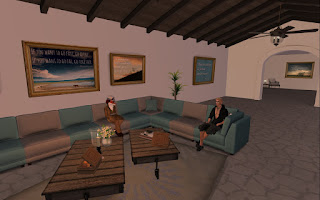 He then explained how he got into the group, "What inspires me to keep the group running is the fact that the group was so helpful for me after my suicide attempt four years ago. ... I nearly succeeded. I was sectioned under the Mental Health Act (UK), and spent six weeks in a psychiatric hospital. It was a turning point in my life, as it gave my illness a name. Up until then, I didn't realize how ill I was. When I came out of hospital, it was difficult to get the help I needed to readjust to a normal life, which is when I found Survivors of Suicide where I could get guidance from others who have experienced similar things." He had found out about SoS, as it's sometimes called, by doing a search for mental health groups, "and it was one of the top three results." 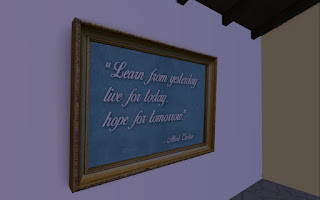 When asked about the progress of his recovery, his answer was, "In one word, slow. (laughter) Joking aside, it was very tough to come to terms with having bipolar. It wasn't what I had hoped for me, but that is part of life. We cant decide what cards we are dealt. It took me a couple of years to come to terms, and even longer to fully accept my diagnosis. Nowadays I embrace it, and I spend a lot of my time helping others who are going through similar experiences in their lives."

I asked how many were in the group. Sebastien told me, "743 members at the moment (smile). We are the largest active mental health / peer support group in Second Life. Of course some of our members are more actively participating than others. We think it is so important for the group to be open to everyone. We do get a lot of people come through during the holidays. We have mentor boards on the wall by the staircase where anyone can click on our mentors boards to speak to someone one on one." I asked if the group included people other than those affected by suicide. He told me, "Yes, we are open for anyone. Some of our members are not even suffering from mental health issues, but are carers for friends and relatives that do."

How did Sebastien go from a regular member to one of the staff? His answer was, "I think it was a natural progression. As I got better, I started needing less and less help, and simultaneously having more and more advice to give.  I started here as a mentor, helping members through difficult times and sharing my own experiences. Then when Krissy needed a Director of Mentors, I took on that role. I have had managerial experience in real life, so I guess that helped in her decision to appoint me. Then as she had to withdraw even more from Second Life, she made me a co-founder, and I've been doing that for the best part of a year now. I think another important part was that I am very committed to staying well and healthy, and I try to help others do the same. My favorite saying is 'When the sun shines through again, it is time to patch the roof for rain.' It is kind of my motto, really. Knowing that we have a chronic illness, and taking steps to prevent and minimize relapses." 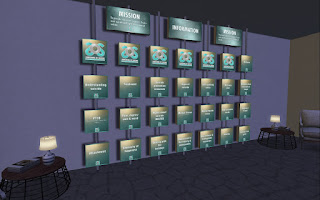 How would he say the group has been doing this time? "It has been pretty steady," Sebastien answered, "Participation in group meetings have increased over the last six months. The average is between four and ten people at a time, which is a really good group size really. Of course we are slightly busier now during the holidays which sadly is a peak time for depression and suicide. I think it reminds people of how lonely they are. So we are here to make sure nobody feels alone." I asked how much busier they are during the Christmas holiday. He answered, "At least thirty percent busier. Maybe fifty percent."

So what would Sebastien recommend to someone who suspects a friend of theirs has depression, and at what point should there be cause for concern? He admitted, "That's a tricky question because everyone are so different. But I'd say its time to start worrying when someone changes drastically from their usual selves, especially if the person is talking a lot about death or suicide. I will say though, if someone decides to withdraw, give them space but encourage them to participate in things, even if its just going for a walk together." I asked him what stories besides his stood out. He told me, "There are too many stories to share them all, but we have helped people suffering with anything from bipolar disorder, anxiety, depression, disassociative personality disorder to childhood abuse victims, each and every member here has their own unique stories." 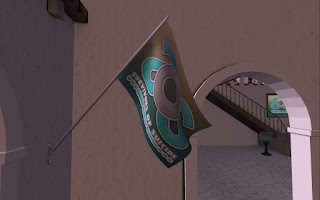 With the holidays being a time when more people were coming forward, I asked Sebastian if the group had any special plans. He told me, "One of our mentors is organizing a 24 hour sleepover, though the exact date hasn't been set yet. Other than that, we will continue with our weekly group meetings as normal, and have mentors available throughout the day and night for people who need someone to talk to. We have mentors in the US, Canada, UK, Germany, and Australia, so there is usually someone online most of the time. And when nobody is on, there will always be someone in the group chat where people can reach out as well." And their plans for next year? "The current plan is to increase our support group meetings to three per week instead of just two, each one focusing on different aspects to mental health and wellness."

I asked Sebastien about other mental health groups. He told me, "I have seen quite a lot of mental health support groups come and go in the over six years we have been open. I don't want to comment on them as they are no longer open." 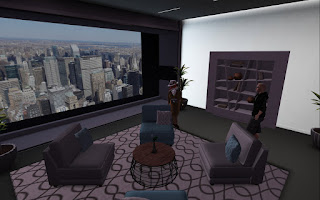 Sebastien then showed me the upper meeting room, located almost a couple thousand meters high above the sim. It was a somewhat small room with four chairs large enough to seat more than one person, a bookshelf that looked like it came out of a modern art painting, and a window showing a view of a major city from above, as if in a skyscraper. He told me, "When people click my mentor board I like to bring them here to talk. It is a private and calm space where nobody will disturb us. I have even held an intervention here with one of our members and their friends. Suicide is a serious matter, and we take it very seriously here. I do have to say, that we are NOT mental health professionals, and we don't offer counseling. We are purely a peer support group here to help and support one another through difficult times. Even if we were trained mental health professionals, it would be highly unethical to practice that here in Second Life."

It was about then the interview was over, and we parted ways.

Currently the Survivors of Suicide meets on Wednesdays at 4pm SLT, and  Mondays at Noon SLT