A Favourite Irish Musician Returns to Perform at Music Island

Two years since his last recital inworld, the composer, performer and raconteur, Dainial, returned to Second Life to give a live performance on Sunday December 9 at Music Island. A little slice of Ireland was created for this intimate opportunity to hear Dainial's music and stories once again. The audience were invited to join him around the fire in a traditional Irish croft house, with a roaring fire in the hearth and the sound of birdsong in the trees outside the window. 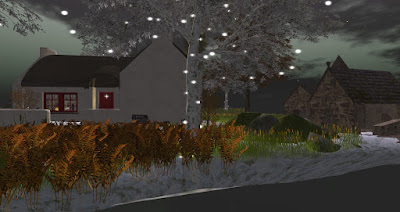 The room full of avatars, lounging in armchairs and perched on kitchen stools, was evidence enough that Dainial's return was much anticipated and his music well loved. We were treated to a program of original works entitled "an Sean Phobal " (The Old Parish), drawing inspiration from remembered faces and voices from the past. Dainial 's music is strongly influenced by Irish traditional music and song with a twist of jazz and classical expression. He uses synthesizer and piano to score layers of sound as a canvas for his lyrical saxophone melodies. While juggling all these elements during the live performance, Dainial kept up a patter in his soft voice, bringing each piece alive with his own memories. 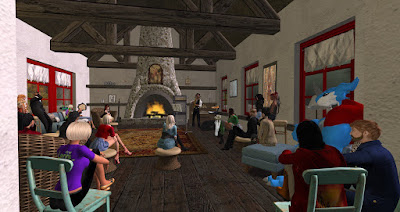 The audience could follow along with a specially prepared souvenir program with text and photographs. It opened with "Equinox", a song written for "Mikey" , one of "old people" who Dainial recalls gathering each in an old shop that sold clocks, radios, bikes and bric-a-brac, to exchange songs and poems. The program continued with compositions in which the music was layered over poems, stories and songs passed down through the generations, from various sources such as an interview with Dainial's grandmother and an old cylinder from a German POW camp in 1914. We were also treated to interpretations over the words of poems written by Irish poets and read by people known and dear to the composer. His piece "Summer has Gone" in memory of Sean O Cinnéide was especially poignant. Dainial explains: "Sean recites a 9th Century Poem for Christmas: It is called 'l have news for you' and was written in the margin of the Book of Kells by a scribe monk. Really though, this is a song about my grief still at his sudden death last February. He was a true friend and colleague. With a remarkable voice." 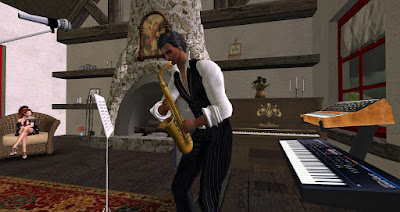 Dainial learned music in the traditional, aural way, by playing and by listening and, although he can read music, he doesn't sight read, and prefers to learn by ear. While he scores his music, he says "it doesn't feel intuitive to me. I suppose this is not surprising for an Irish musician in a way, because I share this way of learning tunes, by ear, with generations of traditional Irish musicians, but also my own family who are alluded to by my grandmother in my tune 'the music is in all of us'."

We came back in to land by way of "The incantation of Amergin", featuring the voice of  Padraigin Ni hUallachåin singing an ancient Irish poem. The magical, transportive experience was over all too soon, leaving the audience hungry for more. Dainial thanked Kate Miranda of Music Island for hosting the concert. We hope it will not be as long as two years before we have the chance to hear him again.

You can hear a little taste of Dainial's music on his SoundCloud: https://soundcloud.com/ceolsampla
Music Island has an ongoing program of wonderful live music performances:


Klaus Bereznyak
Posted by Bixyl Shuftan at 6:00 AM