Bixyl Shuftan and I got together on December 17, which was his RezDay. I gave him congrats on turning twelve. “Thank you," he replied, "it's certainly been a long, sometimes strange, usually wonderful journey.” 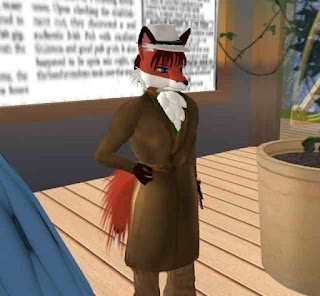 I asked Bixyl what his greatest accomplishment in twelve years on Second Life is. “Good question," he replied, "I would say in keeping the Newser team going. Next to that, I would say getting it started. After Dana decided to fold the Second Life Newspaper, four of us decided to start a new one, with me as the head as I was one with the most experience.”

I wanted to know if at the beginning it was his dream to be a writer on Second Life. “Well, twelve years ago, I didn't really have any goals, other than to explore around, see what this place was like," Bixyl said, "After I saw the Relay for Life weekend, I started coming here more often. But it wasn't until I saw the call for Reader Submissions in James and Dana's Second Life Newspaper that I thought about writing about this virtual world.”

I asked Bixyl more about his accomplishments on Second Life, including working on Relay for Life as well as helping out with the Happy Vixen Club. “I've done my best," he replied, "For the Relay, once I became a member of the Sunweaver community, that meant being involved as a participant in the Relay, not just a reporter covering it. So I've helped them out by covering their events, as well as volunteering for a few fundraisers. The Happy Vixen, it's owned by Nydia Tungsten. who is my best friend here. When she asked me to help her manage it , I told her I could help out. At the time, it had only had two or three events a week. It being a beach club, the idea was it would be a bit more laid back. As DJs kept wanting to play there, we took on more events. It does keep me a bit busy, but most everyone's happy.”

I asked Bixyl what his advice would be to people wanting to be writers. “In short, go for it," he replied, "If nothing else, you could always put your writings on a personal website or blog. But you can always find an audience if you know where to look, or go. In the case of Second Life journalism, there are newsletters such as the Newser, that are open to new talent coming in. Fiction writers, you can always go to writers workshops to compare stories to those of other writers, get a little feedback.”

I asked if there are openings on SL Newser right now. “Yes," said Bixyl, "We're still open to new talent, provided they've been in Second Life for thirty days or longer, and can write an article once a week or more.” He would later tell me this applied only to reporters on the Newser team as they're paid for their work. Readers can submit articles of their own to be published any time.

I asked Bixyl if he is going to continue with Second Life. “Yes," he replied, "The Newser's still going strong. Second Life, for it's ups and downs over the years, will be around for some time to come. So we'll be continuing to write about it for some time to come. And of course, this is a team, so my thanks to Gemma Cleanslate, Grey Lupindo, and Shelie Sands who helped encourage me to get this project going. And those who joined the team along the way, such as DrFran, Grease Coakes, and of course you.”

My next question is if he felt he accomplished much while being on Second Life. “I hope so," said Bixyl, "What I do know is that many have sent us their thanks over the years for our coverage, such as from the Sunweavers and the Relay. We've also gotten compliments for our style of journalism.”

I thanked Bixyl for being a mentor and inspiration to me in my writing about Second Life. You're very welcome," he said, "Perhaps soon you'll be an inspiration to a new writer on the team.” He would say that he hoped the Newser had and will inspire others to start writing.

Bixyl did have one bit of advice, “I guess my last bit of advice is while there's a time to postpone plans and dreams as realities change or don't go to plan .... 'hang on to your dreams. Some become tomorrow's realities.' "

I thanked Bixyl for his time. I have a good feeling that he will continue to write about Second Life and lead the Newser, for years to come.