Sebastien Bouevier and Survivors of Suicide 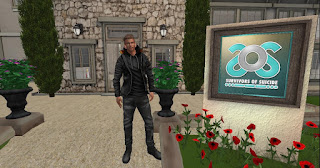 "Survivors of Suicide" is the largest group in Second Life for people dealing with depression or people who know someone who is. It is headed by Sebastien Bouevier. Recently, he and I met at their new location that was opened a week ago.  I asked him if we could stop by the beach.  We did. The beach area was well done, resembling one in real life. “That's what I was trying to achieve,” said Sebastien, “I wanted somewhere tranquil and serene for people to come and relax.”

We went to a lookout and sat down. I asked Sebastien if his group was particularly important this time of year.  “Yes," he replied, "the holidays is typically the busiest time of year for us at SOS, as a lot of people don't have much in terms of family and friends in real-life, as well as it being a stressful time of year for literally everyone.” 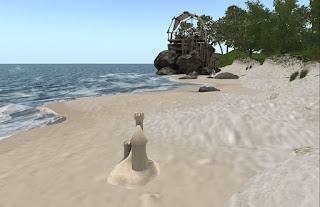 According to Sebastien, he didn't join SOS until just over six years ago. It had already been running for almost four years by then.  Krissy Sinclair, the original founder, started it after being a member of a similar group in real life, and realizing that there was a need for it here on Second Life.

I asked Sebastien how many members are there in the SOS. He said, “As of today we have close to 900 members.” said Sebastien, “Yes, we got over 100 new members during the Christmas Fair.” Their Christmas Fair was a month-long event to celebrate their tenth anniversary as well as gain awareness and raise money for the group. 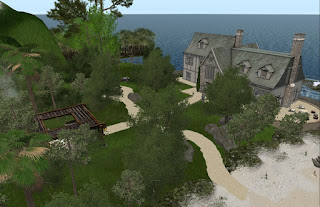 My next question was, “Would you agree that SOS is attracting more and more members in the time of need because they are there to help people in need?”  Sebastien's response was, “Yes, I do agree with that. Survivors of Suicide is here for everyone and we are open 24/7. We have a team of mentors who are able to talk with people one on one, and when there aren't any mentors available, our group chat is active and very friendly. It is a sort of community of people all helping and supporting each other.”

The next question is if the SOS would continue on much longer. “Oh yes," said Sebastien, "we are the longest running group of this kind in Second Life. We have seen many other groups come and go, but none have stood the test of time. Judging by the immense support from the SL community at large during our event, we will continue to stay open, and continue to grow.”

My next question for Sebastien was when the best time to ask for help would be. “Hmmm, it really depends," said Sebastien, "we have members and mentors from the US west coast, and even Hawaii, to Australia and New Zealand.”  “Lets put it this way, I've never been online and not have had at least a dozen of members online at the same time.” 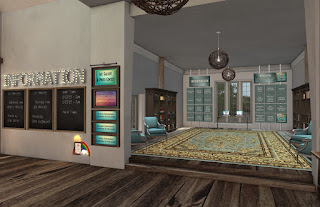 The next question was, “Is there such a thing as exchanging emails with other members or/and mentors so they can continue to receive the help they need when they are not on Second Life?”  Sebastien's response was, “No, but that segues nicely into something I wanted to share with you and your readers," said Sebastien, "We have started embracing social media. We are now on FaceBook, Flickr, and we have our own Discord server. Are you familiar with Discord? ...  It is called Survivors of Suicide. We have a discord button in the entrance hall of the main SOS building long with a button for our website, FaceBook page, and Flickr.”

“I'm excited that we are now able to reach out to our members even when they aren't in Second Life,” Sebastien said, “It was really nice to see all the people that came to visit us during the event, we have over 3000 people come through, and I spoke with over one hundred of them, and everyone had stories of either themselves or people they knew who has gone through very difficult times.  We are going strong into the future, with a new club house, more meetings and activities than before, and that we are here to stay.”

As the interview came to a close, Sebastien said, “My main goal for 2019 is to grow the membership of SOS, I realized just how many people who needs us, or could benefit from us, but don't know we exist. So that is the main objective, and any publicity we can get is fantastic!”

The interview came to a close and I have a good feeling about the future of Survivors of Suicide.  As Sebastien said, they are here to stay. As a member of SOS, I look forward to many days with the group.  SOS is an excellent group, and they are helping people out in need.