It was a few days ago that my attention was drawn to the Historical Hunts group. The reason for the announcment was that group founder Perryn Peterson had made a certain announcement. 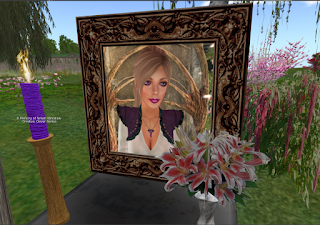 I regret to inform you that Miss Tai' (Tai'lahr Winnikow) has passed away in RL.  This is the message I received from her RL husband:

"Tai'lahr left us this day without ever realizing how many people she touched and how much she was appreciated."

Please keep them in your thoughts.  A suitable exhibit will be established at the Mieville Memorial Gardens for Miss Tai'.

Checking the place at Mieville Lakes (127/203/22), I noticed a picture of a lady with a candle nearby, "In memory of Tai'lahr Winnikow, creative, clever genius." Asking around, Oldesoul Eldemar of the Relay for Life told me, "She was awesome and so helpful in (the) Fantasy Faire and Fallen Gods groups. She helped us moderate Fantasy Faire backstage and fans. She did the hunts for Mieville."

Oldesoul recommended I contact with Wyvern Dryke, also known as Wyvvy. "I was glad to call her one of my friends," he told me, saying she was here for eleven and a half years, "I knew her about five years of that." When I asked what she did, Wyvern answered, "Many things. She helped a great deal with the events in Mieville, including checking that the merchants were all ready for the hunts, helping hunters who needed assistance in the hunts, and creating games for the events." She had been doing so for about four years, "She was so giving, she said once she'd rather give things away then sell them. ... She also helped others create their own products.  She taught them scripts, among other things. She was very giving and generous. ... She is missed by all of the Mieville community.  Her absence leaves a massive hole which will not be easily filled." 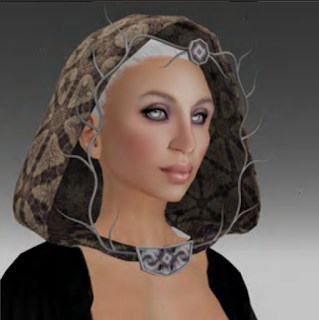 Wyvern suggested I talk to Kerryth Tarantal for more information. As it turned out, she was a longtime friend who knew her before they both came to Second Life, "I must have met her in 2006 or 2007. We were in the version of Myst Online - Uru Live that was carried by GameTap at the time. We shared some of the same activities in that game. Like SL it had a lot of free form social qualities." They came here about the same time, "In February of 2008, GameTap announced that Myst Online, or MOUL, would close in two months. By that time, we had a close engaged community of several hundred people. We 'emigrated' kind of in a body. Some went to games like Eve Online or Lord of the Rings. But most came to Second Life who were old enough, beginning of April, 2008. Tai and I have rez days one day apart."

Of their first days, "I don't think we had a lot of contact in the early days. It was a large community. I was going crazy becoming a shoppaholic and going on hunts, and she was already building and inventing. There were a lot of parties. Hers were the most fun. Because there were so many of us from Uru, we all kind of cocooned in our group for quite a while. And we had a lot going on. The best memory I have is when she helped organize a box-bot themed party that was hysterically funny and almost the most fun I ever had in SL. She made costumes and cereal box bumper cars and playground equipment and rides and toys. This must have been late 2008 or 2009. I wasn't building then, and I was amazed at the creativity of it. People still talk about it. Someone brought it up today."

Kerryth told me Tai' was a source of her encouragement, "I started a little fractal art gallery around that time and started making clothes in 2009. She was the person who encouraged me the most. In fact, she got behind and pushed! (She) helped me organize a fashion show - right before I had surgery and couldn't use a keyboard for weeks. We got it done. The thing about Tai was that she was always like that. Encouraging, helping other people. It didn't always sit right with everyone. (smile) She was always creating and inventing, and it was all pretty much outside the commercial world of SL. She gave things away. She was embarrassed to sell things. She just wanted to give, so people could have fun. There was a spirit of exploration and discovery in those early years of SL that's kind of hard to find now. She was whole heartily into that." 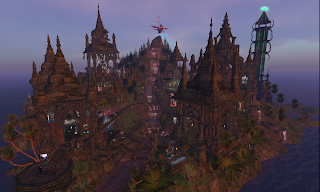 While Tai' did a lot, she preferred to work quietly behind the scenes with no one else besides a few friends in the know. Kerryth told me she "Never wanted to be the center of attention. She hated it in fact. Very private." She then went on about her, "Excellent scripter. We used to brainstorm silly ideas. So much fun. I'm going to miss that very much." And what kind of ideas did they brainstorm? "Things I could make for my store. Or for Burn2 or events like that. I would create the objects, do the texturing, run the business. She was all about 'What can we make this thing DO?' That spirit has changed the direction of what I do. In the direction of what gives me joy and less concern about 'marketing.' Or she would make a mock up out of prims and I would make a mesh to do what she envisioned. But she was getting to be fairly good at making mesh herself these last couple of years."

So what next? Kerryth told me, "I'm going to bring some of her creations out for a retrospective, probably next month. Toys and gadgets. There are a lot of things around my store that we worked on together. Everywhere you look, in fact. But her greatest contributions were hunts and games for Mieville events. I have a gallery space at my store." She felt her best quality was, "Her generosity - I think I mentioned that. She was always popping up to offer help in hunts. She was passionate about Fantasy Faire, though she avoided any kind of limelight. I think Fantasy Faire appealed to her exploring, discovering side. It's like two weeks in a theme park for those of us who are involved! Her absence leaves a huge empty space in my work and in the communities she was part of." Of the attention now on her, Kerryth told me, "It would have made her terribly uncomfortable. We were reflecting today on how all this attention would probably have sent her offline. (smile) That's how she was."

Remaining in the Historical Hunts group, I would hear occasional talk about Tai', "Hope everyone is out crunching bones. There won't be any more of Tai's amazing fair games unless she passed the setup to someone else. (frown) Just one of the superb creations we have enjoyed over the years and won't have around any more." Only now is how much this woman meant is becoming more widely known, and it is clear she will be very much missed.